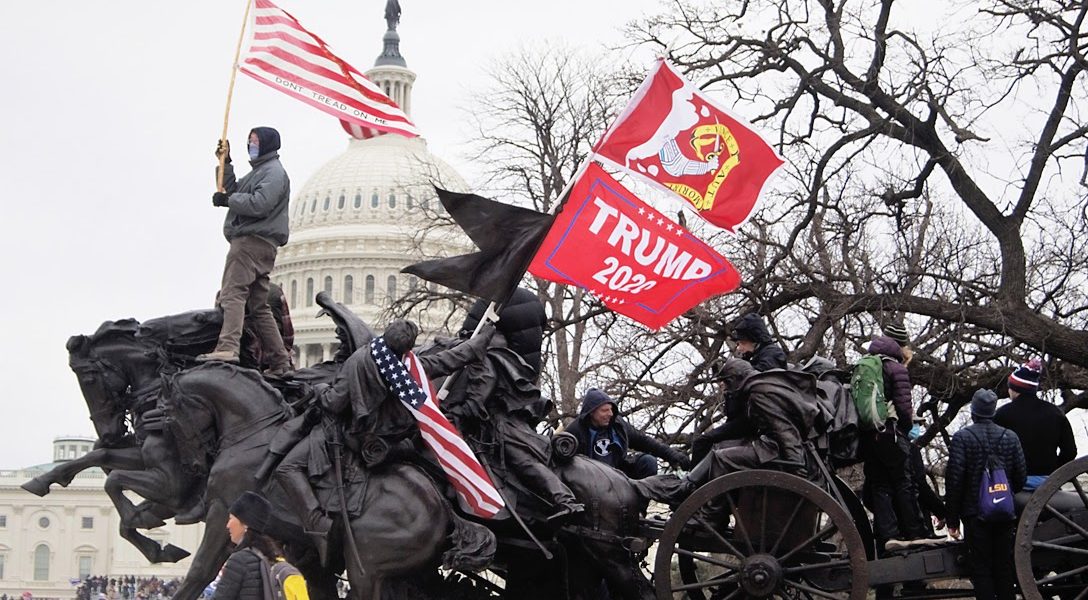 Pro-Trump supporters stand on, drape, and affix flags on the Artillery Group Statue at the Ulysses S. Grant Memorial while they overrun the US Capitol grounds in Washington, DC, on January 6, 2021. Photo credit: Tyler Merbler / Flickr (CC BY 2.0)
Government Integrity Opinion

January 6, the day the Capitol building was sacked by Visigoths, happens to be the Day of Epiphany in the Christian calendar. It was on that day that the newborn baby Jesus revealed himself as divine to the visiting Magi. “Epiphany” literally means “a revelation.” The question is, did Trump’s supporters have just such an epiphany while in the midst of defacing the Capitol, chasing after Nancy Pelosi with zip ties, and spilling their first blood — namely, that revolution is a lot easier than they may have thought.

In fiction, vampires become ravenous after tasting their first human victim. In a thankfully outdated practice, fox hunters of old used to “bloody” their foxhounds with the blood of their first kill, and even smear the faces of their children, thus to inspire both hound and hunter to future bloodshed.

Think of the French Revolution. It lasted for years — the Reign of Terror did not end until 1795 — yet it is celebrated on the day of its first major bloodletting, July 14, 1789, when the Bastille was stormed, its head jailer stabbed to death, and his head placed on a pike. Many in the mob were killed that day, but a revolution was born. The question before us is how January 6, 2021, will be regarded in years to come, as a footnote to history — or a major turning point?

The end of Donald J. Trump’s presidency is likely not the end of the story. It might be simply the opening chapter of something more horrifying. Trump may be gone from the White House but Trumpism seems alive and well in the land. The president, far too late, was cut off from his favorite social media platforms, and was rightfully impeached for the second time. But as a result many of his most fervid and sadly misinformed supporters now view him much as he views himself — as a victim. And we seem to be living in the middle of the Age of Victimization.

Given the nature of social media and the money-making algorithms that drive it, many of these Ever Trumpers will likely never hear, read, or learn the truth about much of anything concerning our recent history. There seems to be no way to reach them.

The leaders of the January 6 mob will be dragged to court and perhaps to jail, but there is nonetheless much to worry about in Trump’s “populist” revolt. The majority of citizens may have voted Trump out of office by a resounding margin of 7 million, and their duly elected representatives may have voted to impeach him for a second time, but an aggrieved minority stubbornly refuses to accept these outcomes. The soon-to-be-ex president still holds almost three-fourths of Republicans in thrall. That suggests close to 50 million followers for whatever causes he, his family, and his most ardent supporters might espouse. Given the nature of social media and the money-making algorithms that drive it, many of these Ever Trumpers will likely never hear, read, or learn the truth about much of anything concerning our recent history. There seems to be no way to reach them. Many of us have experienced this phenomenon within our own families. Rather, they will continue to tweet, retweet, and post lies to each other that slowly build up like giant dunghills upon the foundational Blood Libel that it was Trump who won the election by a “sacred landslide.”

The Big Lie has driven fascism throughout history. In the aftermath of the Civil War it was the notion of the Lost Cause of the “heroic” confederacy that drove the depravities of Jim Crow well into the 20th Century, with the lynchings, cross burnings, and a bewildering array of discriminating laws. It was Hitler’s stab-in-the-back myth, known in German as Dolchstosslegende — that Jews and “cultural Bolsheviks” had betrayed German armed forces from front offices during World War I, and then betrayed the country again during the peace negotiations — that drove the Nazi narrative during the 1920s and early ’30s.

If we are facing further civil unrest in our immediate future, it will be thanks to another grand false narrative. To the Lost Cause and the Stab In The Back, we can now add Trump’s 2020 “Stolen Election.” Trump began constructing his Big Lie long before the voting began — in fact, he first trotted it out in 2016 just in case he lost that election — and he has been embellishing the core script ever since, never mind that no court has found fraud and every state recount has reconfirmed Biden’s vote margins.

As Bret Stephens wrote in the New York Times, the point of Trump’s fraud was to “make an obscene joke of the Biden administration and our constitutional system of government.” Trump’s hysteria and hyperbole reached its zenith at the rally on January 6, in a rambling, seditious speech that would drive his followers towards the Capitol with blood in the eye and chants of “Hang Mike Pence” on the tongue. The snippets of Trump’s diatribe that were broadcast in the days following the riot barely begin to convey the seditiousness or inanity of his full message. But the following might give more of a sense of the language that incited such a historic riot.

They may have learned just how easy it is to create mayhem, to foment insurrection, to make politicians run for cover. Trump’s attempted coup may have failed, but it came dangerously close to succeeding.

After spewing venom at the media, Big Tech, and weak Republicans, and after bragging about the size of the crowd — he claimed 100,000 when it was likely under 10,000 — the president continued:

We will never give up, we will never concede when there is theft involved. Our country has had enough, we will not take it anymore. It’s a disgrace. We will not let them silence your voices. We are not going to let it happen. We are stuck with a president who lost an election by a lot and we will have to live with that for four more years. We are just not going to let that happen. … We are going to have someone in there that should not be in there and our country will be destroyed.

We have come to demand that Congress do the right thing. … History is going to be made, and we will not be intimidated into accepting the hoaxes and lies that we have been forced to believe. You’ll have an illegitimate president, that’s what you’ll have, and we can’t let that happen.

We won’t have a country if it [Biden’s election] happens. … This is a criminal enterprise. … This is the most corrupt election in the history, maybe of the world. … You better do it [move against the Capitol] before we have no country left.

This harangue is just one piece of a bewildering tapestry of rally speeches, tweets, White House pronouncements, and press conferences, all delivered with the aim of undermining a free and fair election and defaming a duly elected president of the United States. President Trump even called upon his attorney general to arrest his political opponent and put him in jail. His followers, rather than being appalled, seemed pleased. No doubt it reminded them of the good old days of “Lock Her Up.”

A few months ago, while in North Carolina, Trump told loyalists that there is only one person, past or present, more popular than himself — Jesus.

Will Trump’s supporters, having tasted first blood, go back home, crack open a beer, and call it a day? Not likely. They may have learned just how easy it is to create mayhem, to foment insurrection, to make politicians run for cover. Trump’s attempted coup may have failed, but it came dangerously close to succeeding. We are safe, but only for the moment.

As a celebrity “the Donald” was a master at commanding the public stage and manipulating the media long before he ran for president, and he will almost certainly find a way to do so going forward. He is currently the Gallup Poll’s Most Admired Man, and truly beloved by millions. A few months ago, while in North Carolina, Trump told loyalists that there is only one person, past or present, more popular than himself — Jesus.

Did We Just Witness Our Fort Sumter?

Trump haunted Barack Obama with his fraudulent birther conspiracy. In a very real sense the birther conspiracy, largely unchecked by the media, launched Trump’s campaign for the presidency, along with his equally laughable claim that he was a “self-made” businessman. While president, Trump constantly vilified the very government he was in charge of, often claiming he took no responsibility for his administration’s actions — such as separating children from their parents at the border — or for its inactions, as in the case of the COVID-19 pandemic that he repeatedly claimed was “turning the corner.” Somehow he pulled off the amazing trick of being an aggrieved outsider even while holding the most important job in the land. During the coming administration it is all but certain that Trump will troll Joe Biden mercilessly with the myth that he came by the office through egregious theft.

In a recent guest appearance on MSNBC, the venerable columnist Mike Barnicle pointed out that Donald Trump “has managed to kill the truth.” The harm to our civil discourse will likely reverberate for decades. And having killed the truth, Trump has created an even more fertile environment in which to sell his new con: that a privileged white guy who inherited close to half a billion dollars and became our 45th president is now a modern-day martyr! What will the people worship in years to come? Rather than the Shroud of Turin, perhaps a red silk tie? A piece of “The Wall”? The presidential tanning bed?

Stay tuned. We are only at the beginning of the story.