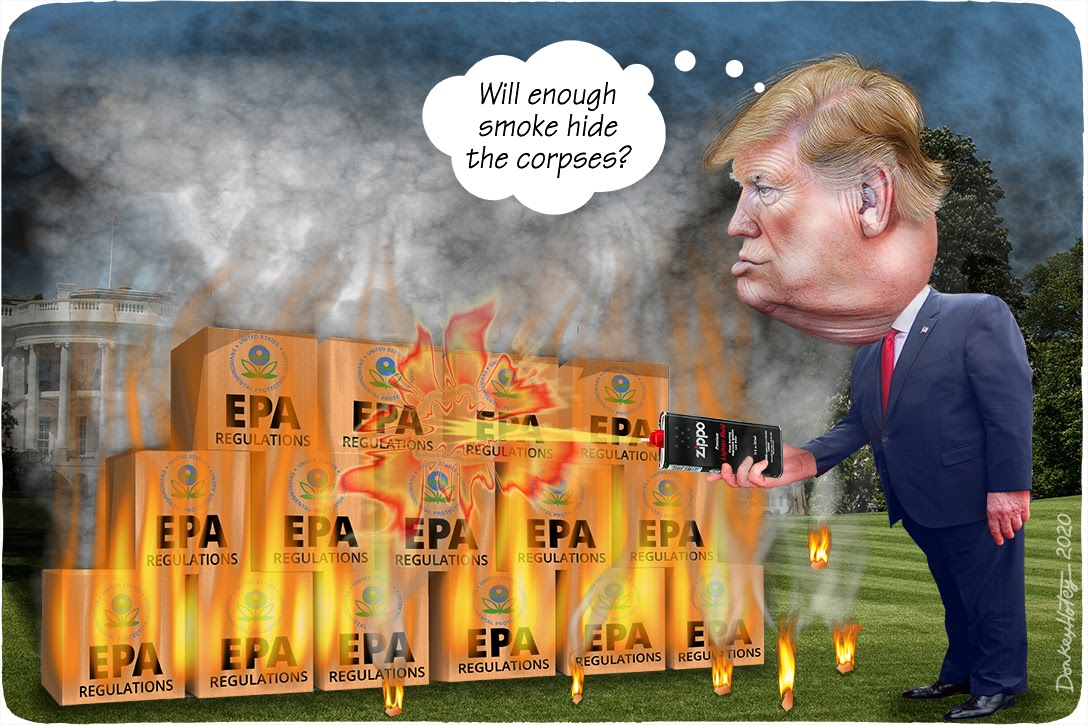 It is silent, deadly, and all around us. No, it’s not the coronavirus. It’s the dirty air millions of Americans are forced to breathe. And while the Trump administration has done too little to protect Americans from the current pandemic, its record on pollution is much, much worse — and its recent policies seem particularly cruel and wrongheaded right now.

Without even factoring in the ravages of COVID-19, we know that air pollution is very hazardous to health. Epidemiologists at Washington University in St. Louis examined the medical records of 45 million US veterans over ten years, and found an estimated 200,000 deaths were linked to particulates in the air that actually met current US air quality standards.

Even more concerning, African American vets were more vulnerable to the ravages of poor air quality than white vets exposed to the same level of pollutants in the air.

“I went into it thinking pollution is color blind … it’s not true,” Dr. Ziyah Al-Aly told the Guardian. “Actually, pollution itself does discriminate. For the same level of pollution, black people tend to be affected more. And on top of that, black people get exposed to more pollution than white people.

“It’s kind of like a double-whammy,” he added. “It’s really unfair.”

Just this week, capping three years of unraveling nearly 100 regulations, the Environmental Protection Agency (EPA) finalized a rule that would drastically reduce automobile fuel efficiency standards. The new rule revises an Obama administration standard put in place to address climate change. Under the Obama rule, cars would have had to average 54 miles per gallon by 2025. The Trump rule changes that requirement to 40 miles per gallon.

The EPA not only is primed to allow automakers to unleash almost one billion tons of additional carbon into the air, increasing global warming. The rule also will make US air more dangerous to breathe.

That’s in part because anything that increases the amount of carbon in the air increases global warming. Climate change helps trigger events like forest fires that make the air we breathe dirtier.

This new policy would be cruel at any time, but seems particularly callous when the country is in the grip of a pernicious virus that preys in particular on Americans who already have respiratory problems, like asthma and lung disease.

In a statement, the American Lung Association (ALA) charged that the new rule “will result in dirtier cars that pollute the air and harm public health.”

The fumes from car tailpipes add to pollution, the ALA stated, particularly for minority and low-income people who often live near major highways.

Even worse, this federal policy will apply to all states. Over the past half century, under authority given the states by the federal Clean Air Act, California has imposed stricter mileage standards on automakers. Thirteen states and the District of Columbia follow the Golden State’s mandates.

Indeed, in 2019, California — fearful that the Obama standards would be gutted by the EPA — reached an agreement on a compromise standard with a few carmakers.

President Donald Trump reportedly was furious that some auto companies already had agreed to accept California’s requirement that they achieve 51 miles per gallon by 2026.

Perhaps his ire explains why the White House revoked the permission the federal government had routinely given California to impose stricter rules. The Trump Department of Justice also opened an inquiry into the four auto companies — Ford, Honda, BMW, and Volkswagen — that agreed to accept California’s standards for alleged antitrust violations. The DOJ dropped its investigation in February.

But that’s far from the only thing the White House has done recently.

Just last week the EPA capitulated to every special interest. The agency announced that any company it regulates is excused from any penalty for the duration of the pandemic — if it can demonstrate that its violation of rules was related to the crisis.

So with this logic, if someone robs a grocery store and says it’s because of the pandemic, the cops should not arrest them, at least for the duration of the crisis. Ditto for murder, particularly if one spouse, cooped up in the house with his or her partner, can offer the COVID-19 excuse.

“Allowing a company to postpone the repair of equipment that leaks toxic gases into the atmosphere, as API [the American Petroleum Institute] has suggested, leaves the public exposed to those pollutants for longer periods of time, increases the risk of fire and explosion, and is not just a paperwork concern.”

This new policy is particularly good news for oil and gas companies, in trouble for not complying with air and water pollution regulations, consent decrees at their refineries, unsafe disposal of fracking waste, and emission reporting requirements.

It might seem reasonable to give companies a break on some reporting requirements, given the disruptions the pandemic has caused, but this blanket relaxation of enforcement of environmental regulations has much more serious consequences. Without oversight or the threat of penalties, companies could easily expose thousands of people near polluting operations to much higher levels of toxic chemicals. In a letter to the EPA, dozens of environmental groups charged that the “suspension of monitoring and reporting requirements would have a very specific impact on public health and safety.

“Allowing a company to postpone the repair of equipment that leaks toxic gases into the atmosphere, as API [the American Petroleum Institute] has suggested, leaves the public exposed to those pollutants for longer periods of time, increases the risk of fire and explosion, and is not just a paperwork concern,” the groups said.

The environmentalists pointed out that just one example — allowing oil refineries to ignore the rule to monitor the amount of benzene they emit — can expose nearby communities to this “deadly pollutant.”

But of course, the Trump White House is not content to roll back rules, the administration also is seeing to it that future rules will be dumber, because they’ll be informed by less scientific data.

Remember that study of millions of veterans and deaths related to pollution? It found not only an estimated 200,000 pollution-related deaths, it also tracked pollution’s impacts on kidney disease, hypertension, and dementia.

If the Trump White House has its way, this study will not be able to guide the EPA in the future. The EPA’s proposed “secret science” rule directs the agency to rely almost exclusively on studies whose underlying data is not fully disclosable to the public. Public health studies, like the one that estimates the health impacts of air pollution, cannot be disclosed because of federal rules protecting the privacy of individual patients.

I don’t know about you, but as a member of the public, I have not been clamoring to see the “raw data” that underlies massive epidemiological studies, sometimes involving millions of health records. The EPA’s claim that this is all about transparency is disingenuous, especially for an agency that so churlishly responds to requests for other more useful public records. Just last year, the agency tried to do an end run around its rulemaking process to make it easier for political appointees to control access to documents under the Freedom of Information Act.

Maybe the Trump White House and all its political operatives might want to practice more “social distancing” and keep their mitts off federal agencies, at least until we’ve escaped the coronavirus, a risk to health almost as damaging as their bad policies.