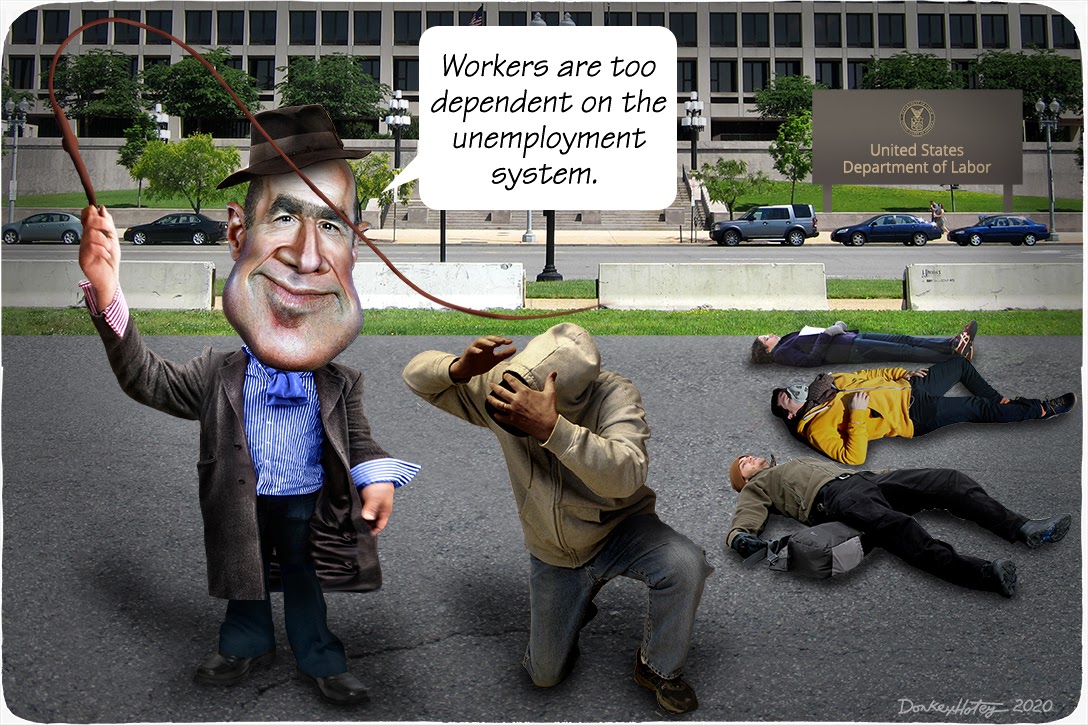 It is said that history often puts the right person in the right job during a moment of crisis. That clearly hasn’t happened during the current pandemic-driven economic meltdown.

There’s the obvious example, of course, as can now be seen almost every day during “briefings” on the pandemic. But there’s also this: When it comes to protecting the health and safety of essential employees, or ensuring that jobless workers get the help they need, the person in charge is Secretary of Labor Eugene Scalia, son of late Supreme Court Justice Antonin Scalia. He’s performing exactly as his track record would lead us to expect.

Scalia has resisted pleas from healthcare personnel to require that hospitals provide them with the proper protective equipment and develop safety protocols. He’s also done everything possible to make it harder for the special pandemic unemployment assistance to actually reach the unemployed. There’s nothing surprising about his lack of concern for those most vulnerable in the crisis.

Scalia is a canny corporate lawyer who apparently graduated from the Simon Legree school of labor-management relations. In a long and successful legal career, he has defended Walmart’s right to deprive its employees of better health benefits, challenging a Maryland law that its framers hoped would serve as a model for other states.

He has been a longtime warrior against federal ergonomics rules designed to address carpal tunnel syndrome and other work-related ailments. Scalia contended that the rules would constitute a “major concession to union leaders, who know that ergonomic regulation will force companies to give more rest periods, slow the pace of work, and then hire more workers (read: dues-paying members) to maintain current levels of production.”

As for his record on threats to public health: Scalia represented Juul Labs, the folks whose flavored e-cigarettes were wildly popular with teens. He pushed back against efforts by the American Academy of Pediatrics and other anti-smoking groups to force the Food and Drug Administration to do more to prevent minors from vaping. Juul is now being sued by parents of teens worried that their kids are more vulnerable to coronavirus complications.

When the Trump administration nominated him as labor secretary, Senate Minority Leader Chuck Schumer (D-NY) called it “a slap to the face of labor,” charging that Scalia “has sided repeatedly with the large corporate interest against working people.”

But oh, it’s been so much worse than Schumer or any of Scalia’s critics predicted.

Under Scalia’s watch, one labor department agency, the Occupational Safety and Health Administration (OSHA), has been “almost completely missing from the federal response to the COVID-19 epidemic,” charged Dr. David Michaels, who ran OSHA for the Obama White House.

In a recent op-ed, Michaels castigated Scalia for not taking the initiative to protect workers. After the Deepwater Horizon oil spill devastated southern coastlines in 2010, OSHA told BP, the owner of the platform, what it must do to ensure that the 40,000 workers hired to clean up the mess were protected from heat stroke and other related health conditions. “Not a single worker was seriously sickened or killed by heat,” he wrote.

In contrast, Michaels alleged, Scalia is using the absence of an OSHA standard specifically addressing airborne infectious diseases to excuse his agency’s inaction. Investigative reporters have confirmed that Scalia’s labor department isn’t lifting a finger to press hospitals and nursing homes to do more to protect healthcare workers.

OSHA also has told employers whose workers are not emergency responders, healthcare providers, or prison staff that they don’t have to report employee coronavirus cases at all, unless there is “objective evidence” that workplace exposure caused the illness. This not only makes the workplace less safe, but the lack of this crucial information could also make it harder to track the spread of the virus.

The only coronavirus-related worker problem Scalia seems concerned with is psychological — that emergency jobless benefits approved by Congress could make workers lazy. As he wrote in a recent op-ed for Fox Business, “We want workers to have work, not to become dependent on the unemployment system. And for business owners and entrepreneurs who spent time and resources recruiting and training a skilled workforce, losing their connection to those employees can be a great loss.”

As a result, the lawyer who never saw a government regulation he didn’t hate is now a convert. He’s parsed the stimulus package with the intellectual rigor of a Jesuit, trying to narrowly interpret assistance provisions against those who need the help most.

The $2.2 trillion stimulus bill includes about $260 billion for beefed-up unemployment benefits for workers who lose their jobs because of the pandemic. Congress also for the first time extended temporary financial help to workers who usually can’t collect unemployment payments — the self-employed, and gig workers, such as Uber and Lyft drivers.

Some conservative Republicans balked at all this emergency aid. But Scalia offered reassurances. He reportedly told Sens. Rob Portman (R-OH), Ben Sasse (R-NE), and Tim Scott (R-SC) that his instructions to states would ensure that businesses would not be harmed.

He’s kept his word. For example, Scalia would excuse businesses employing fewer than 50 workers from giving 12 weeks of paid family leave to parents who can’t work because they have to care for their children. (Businesses would get tax credits to cover the payments.) Congress exempted businesses from this mandate if compliance would jeopardize their financial viability. Scalia’s labor department is not requiring companies to submit proof of impending financial ruin.

On the other hand, Scalia would make it really hard for Uber and Lyft workers to collect unemployment benefits unless they could prove that they couldn’t drive customers anywhere. The downturn in business would not be enough. Older gig workers may not be eligible to get these benefits if they stop working because they are at higher risk for the virus and more vulnerable to becoming seriously ill.

Undocumented immigrants who pay federal taxes also are left out in the cold.

Three million workers will not get these benefits, observed Ai-Jen Poo, executive director of the National Domestic Workers Alliance (NDWA), who spoke to reporters during a press call last week. That affects five million people, including workers’ families, she added. “The cost of not including more workers in federal relief will be devastating. Food insecurity is at the level of a crisis.”

Like the poor in the era of Dickens, many jobless workers will depend on the kindness of strangers to keep afloat, at least for the next few weeks. Poo said that NDWA had launched a special fund to help domestic workers, and “we are inching to our [$4 million] goal by the day.”

But with about 22 million workers unemployed, nonprofit groups can only do so much. That’s raising the hackles of many progressive lawmakers.

“Labor Secretary Eugene Scalia is using his authority to limit who qualifies for assistance,” Rep. Steve Cohen (D-TN) recently tweeted. “We are in the midst of a pandemic! This is despicable.”

But Scalia may simply be too far removed from average working folks and their problems to comprehend the urgency. When your last paycheck in the private sector totalled more than $6 million, empathy may be the only commodity you have in short supply.