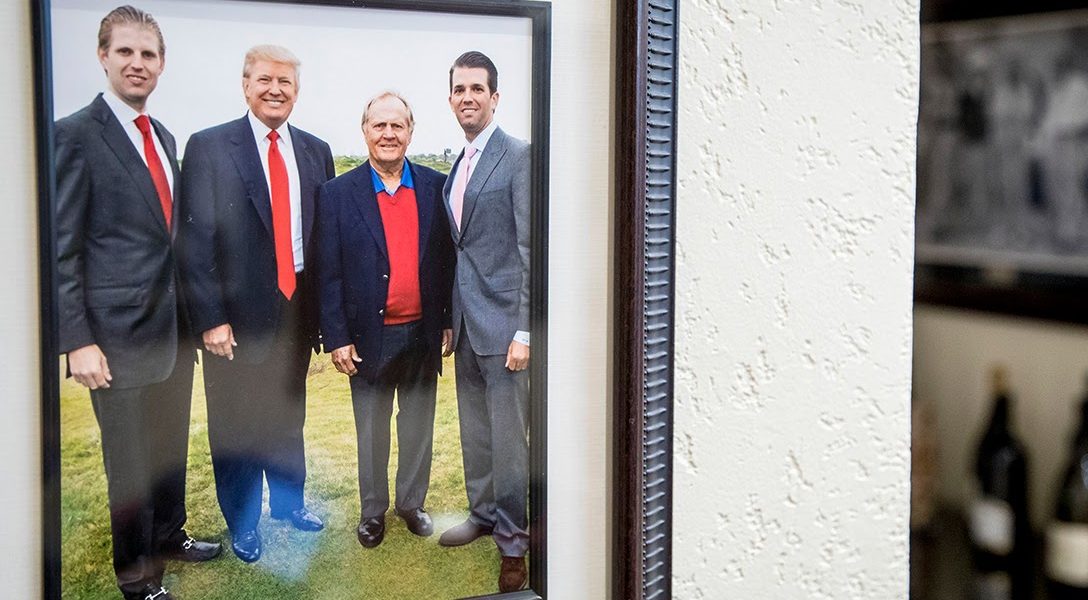 For the umpteenth time, golf enthusiasts were treated this weekend to footage of legendary golf figures Gary Player and Jack Nicklaus making ceremonial tee shots at the Augusta National Golf Club. Normally, this traditional scene at the Masters Tournament conjures up not only nostalgia, but tears among the faithful.

Not this year. Definitely not this year! At least, not with this golf fan. Just days before the presidential election, Jack Nicklaus appalled me and who knows how many others by publicly and bizarrely declaring his support for the reelection of Donald J. Trump. In his statement, Nicklaus wrung his hands over socialism and gave Trump high marks for representing a very “diverse” group of Americans.

It is not clear exactly when “The Golden Bear,” as Nicklaus is known, fell in love with the Golden Fleecer, but he apparently fell hard. Earlier this year, when Nicklaus tested positive for COVID-19, he dutifully took his hydroxychloroquine just as Doctor Trump had recommended. When he was questioned at the Masters about his open support for Trump, Nicklaus said he had only heard positive feedback, noting in passing that perhaps that was because he did not know anyone who was “interested in” Joe Biden. No one, Jack? Not a single friend?

Of our 45th president the golf legend wrote: “His love for America and its citizens, and putting his country first, has come through loud and clear.”

Couldn’t Nicklaus have just voted in private and left the shilling for Rudy Giuliani, Lil Wayne and Lil Pump? Up to the moment of his public declaration, Nicklaus had been universally loved in the world of golf and well beyond. He was considered not just a top ambassador for the game, but for sportsmanship itself. Now, in a single stroke, he has put his stellar reputation in jeopardy.

I do not want to give either Trump or Nicklaus the favor of quoting his inane statement at length, but perhaps this one sentence will suffice. Of our 45th president, the golf legend wrote: “His love for America and its citizens, and putting his country first, has come through loud and clear.”

Really? Did someone in the White House write that for him? To my ear what has come through loud and clear, particularly over these last fraught six months, is the exact opposite. “Love” seems to be a foreign word to our president, as is empathy. Hate he seems to know all too well.  Revenge is an operating principle. Defaming and degrading opponents, not to mention his own hand-picked colleagues, is an everyday event.

In his statement, Nicklaus declared that for him the election was all about “patriotism.” Okay. Let’s pause to consider that proposition. Joe Biden’s son Beau won a Bronze Star serving with the army in Iraq. Trump, on the other hand, with his five deferments and his alleged bone spurs, threatened to disown his son, Don Jr., if he enlisted in the armed services. Four generations of Trumps have succeeded in avoiding any and all military service. Trump has denigrated war heroes like John McCain and dishonored the dead by calling those who fell in battle “losers” and “suckers.” Is that how anyone would define patriotism?

But Jack, let’s forget about all of that. Let’s just talk about your beloved game of golf. In his 2019 book, Commander in Cheat: How Golf Explains Trump, Rick Reilly points out what an odd sport golf is for Trump to be so obsessed by, because “in golf the most revered thing is not winning but honor.” And for Trump, golf is only about winning.

The comparison to President Barack Obama is striking. Obama played a lot of golf as president, so much so that in Obama’s last year Trump tweeted, “250 rounds…that’s more than a guy on the PGA tour plays!”

Trump “cheats at the highest level…he cheats like a three-card Monte dealer,” writes Reilly. “He throws it, boots it, and moves it. He lies about his lies. He fudges and foozles and fluffs.”

Trump repeatedly took to social media to criticize Obama’s time on the golf links, as if there were something inherently wrong with a president taking exercise. He told a crowd in 2016 that, were he to be elected, he would likely not see his golf courses again:

In case you were wondering, Obama finished his eight years with 306 rounds. During his four years so far Trump has played 296 times. In other words, before he leaves office Trump should easily surpass Obama’s number in half the time! Perhaps that is what he meant by working his ass off. I point this out not to begrudge Trump his time on the links, but rather to marvel at his outrageous hypocrisy in this matter, as in so many others. Did that trouble you at all, Jack?

Far more important, of course, is the difference in how they played. Unlike the man you want to keep in the White House for four more years, or another 300 rounds, Obama is not a cheat. According to Reilly, who has been named National Sportswriter of the Year 11 times, Obama “plays like he sleeps with the USGA rule book under his pillow.” Trump, on the other hand, “cheats at the highest level. … He cheats like a three-card Monte dealer,” writes Reilly. “He throws it, boots it, and moves it. He lies about his lies. He fudges and foozles and fluffs.”

We have had many presidents who played golf throughout our history, but Trump is surely the first who has habitually and openly cheated. Is this really the role model you would like to see running the country, Jack? Reilly, who played with Trump once and interviewed close to 100 others who have as well, reports that Trump likes to drive well ahead of his fellow players in his souped up golf cart so that he can try to do as much of this cheating as possible out of sight.

If a ball goes in the water, he pulls another out of his pocket and drops it on dry ground, without mentioning the fact and without taking penalty strokes; if he has a bad lie, he will kick the ball for a better one. His caddies began to call him Pelé, after the Brazilian soccer star, because of his agility with his feet. Even on the putting surface, if he thinks no one is watching, he will improve his position. If his putt is five feet or less from the cup he picks up as if it has been conceded. If someone playing against him hits a great shot, and Trump can get to it first, he may toss it further away.

Reilly tells the story of a round between Mike Tirico, then an ESPN football announcer, and Trump. Tirico hit a fabulous shot 230 yards into a blind green, earning a high five from his caddie. But when the caddie reached the green, the ball was no longer near the pin. It was 50 feet away in a bunker. “Lousy break,” said Trump, who was first on the green. At the end of the round the caddie told Tirico, “You know that shot you hit on the par 5? It was 10 feet from the hole. Trump kicked it into the bunker. I watched him do it.”

Over the years, you must have heard dozens of such stories, right Jack? Perhaps you witnessed some of it? What did you make of it? Did it bother you at all?

At one point Trump bragged to Reilly that he had won 18 club championships. The sportswriter was dumbfounded. Trump is a good golfer, but nowhere near that good. “That’s like an NFL quarterback telling you he’s won 18 Super Bowls,” he wrote. Then Trump explained to Reilly exactly how he did it: Whenever he opened a new golf course, he would play the official opening round and then “I just call that the first club championship.”

Is that how your friends win their club championships, Jack? One also wants to know: were these club championship lists hanging next to the fake TIME Man of the Year covers with Trump’s face, with which he used to decorate the walls of his clubs?

Trump’s End Is Near, but He Refuses to Hear

Beyond golf there is the larger issue of sportsmanship in general. You still do believe in sportsmanship, right Jack?

Throughout his life and his presidency, Trump has displayed less collegiality and less comity than any president in history. He brags that he is not a politician, yet it is hard to think of a single career politician who has been more bitterly partisan. He vilifies all “Dems” as a matter of course. Take the 2020 presidential election. You may recall that Trump called for Biden to be arrested and locked up just weeks before the election, much as he repeatedly called for Hillary Clinton to be “locked up” four years before. Is that what you mean by patriotic, Jack? Is that your new definition of sportsmanship?

By current reckoning, Biden seems on track to win the same number of electoral votes as Trump did in 2016 — 306 — while Biden’s popular vote margin stands at plus 5.7 million votes, as opposed to Trump’s minus 2.8 million popular vote margin against Clinton. Yet while Trump called his 2016 victory one of the greatest landslides in history, he calls Biden’s far more impressive vote margin the result not of the people’s will but of fraud. Trump has been such a sore loser over these last few weeks that he is threatening to bring the entire notion of democracy that we all cherish down along with him.

Is this what you meant when you said Trump put his country first, Jack?

To return to the recently completed 2020 Masters Tournament, I have one last question for you, Jack. Did last year’s winner, Tiger Woods, do the right thing by showing up to drape the green jacket over the shoulders of this year’s winner, Dustin Johnson? Or should Tiger have emulated our current president, your friend and hero, by throwing the jacket to the ground, screaming fraud, and running off to the clubhouse to tweet, “I WON!” Come to think of it, should Tiger have insisted, even before play began, that tournament officials arrest and throw Dustin Johnson in jail, all the while calling him the worst opponent in the entire history of golf?

Thanks for taking my questions.

Jonathan Z. Larsen is chair of the board of Real News Project, the nonprofit entity behind WhoWhatWhy. His book, The Perfect Assignment: A Memoir of Journalism in the Golden Age, was published in January 2020.  So far, WhoWhatWhy has posted two chapters from the book: Heroin, the Vietnam War, and Body Bags and The Captive and the Spy, and plans to post more.