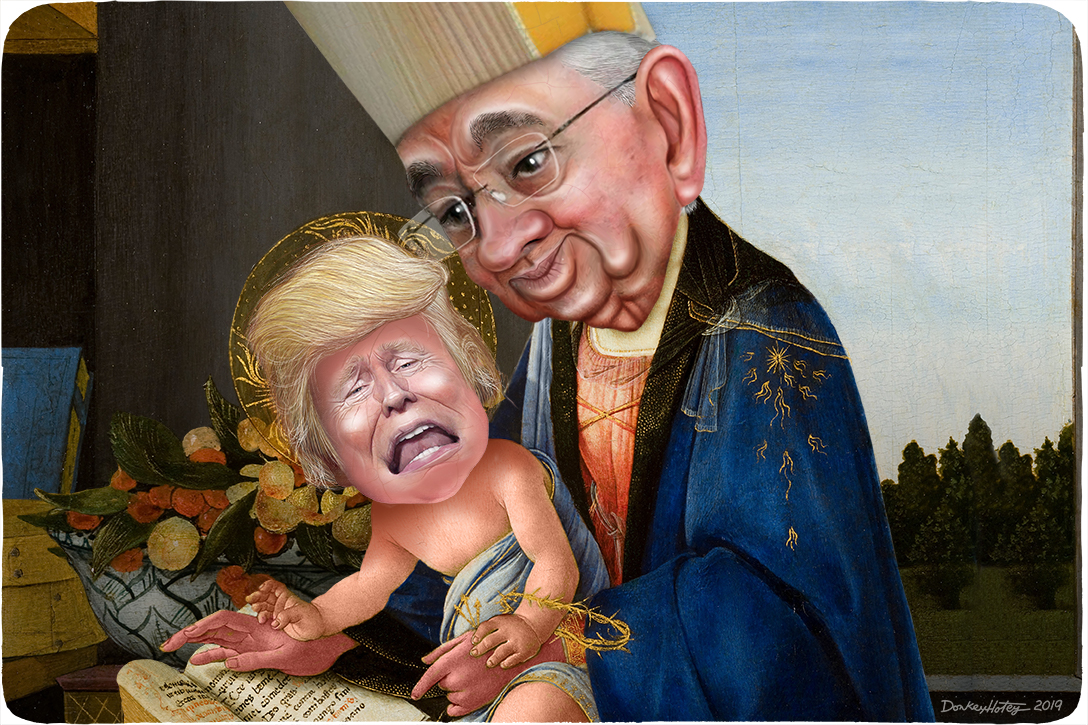 The Sleeper Issue That Could Swing the 2020 Election

Forget impeachment. Forget Medicare for All, global warming, and income inequality. The sleeper issue of the 2020 campaign is none of those. It is abortion — and it could tip the balance in three swing states to favor President Donald Trump.

Abortion may not be on everybody’s “hot issue” list, but it remains so for the people who head the Catholic Church in the US. And while US Catholic bishops don’t sway a huge percentage of Catholic voters, they just might influence the Catholic voters who count.

An estimated 51 million adult Catholics live in the US, about one-fifth of them in the Midwest. When the bishops talk, a key group of swing voters listens: White Catholic voters helped deliver Trump victories in Michigan, Pennsylvania, and Wisconsin in 2016. He won these three crucial swing states by a total of fewer than 80,000 votes.

Legal abortion has been the bishops’ bête noire virtually since the Supreme Court decided Roe v. Wade in 1973. The evils of abortion have been preached from Catholic pulpits; reinforced in annual “Marches for Life,” which draw tens of thousands of Catholics to Washington, DC, to lobby Congress; and in the bishops’ guidance to voters.

The church risks its tax status if it endorses candidates, but it may advise the faithful on the issues they should consider when casting their votes. Church leaders can and do send signals to the faithful about what the church cares about.

Opposition to abortion long has carried more weight with Catholic prelates than observing other Catholic values, such as welcoming the stranger, helping the poor and marginalized, civil rights, and honesty and fairness in government.

And in 2016, when candidate Trump flouted virtually all the norms of civility, was accused of sexual impropriety, and spoke harshly of immigrants, the bishops’ silence spoke volumes. After all, Trump, for all his flaws, promised to nominate Supreme Court justices who would oppose abortion.

Since then, the bishops have gotten two anti-abortion justices, and many states have begun to vie with each other to place as many restrictions on abortion as possible. Abortion is guaranteed to remain a hot-button issue next year, as the Supreme Court reviews a new restrictive Louisiana law.

At the same time, Trump made good on his other promises: He’s instituted policies to deport as many illegal immigrants as possible, including those who had lived in this country for years; separated families at the border; held children in terrible conditions; and tried to impose rules that would sharply limit legal immigration. He’s proposed draconian measures to deny the poor access to food stamps. He regularly insults his political foes, and has aimed his worst barbs at women of color.

You would think that the US Conference of Catholic Bishops (USCCB) might be truly appalled at the victory they helped bring about, and more than happy to rethink their message for 2020.

Over the past year, a few bishops were tasked to come up with a short letter to Catholic voters before the next election. “We are trying to make [the materials] kind of personal, realistic and appropriate for what we are going through in our country at the time,” Los Angeles Archbishop José Gomez told his brother bishops last June.

Gomez, himself a Mexican immigrant, chaired the working group preparing the letter, so there was some hope that prelates might discuss all the issues confronting the US and their moral relevance. The newly elected president of the USCCB, Gomez has opposed Trump immigration policies, and has observed that the issue is “personal” for him. Would that make a difference?

Clearly not. Last month, during its annual fall meeting, the USCCB approved a letter that stated, unequivocally, that abortion is the church’s “preeminent priority because it directly attacks life itself, because it takes place within the sanctuary of the family, and because of the number of lives destroyed.”

The “preeminent priority” phrase was reportedly added to the letter at the last minute because at least four bishops pushed for it, not wanting any lack of enthusiasm on the USCCB’s part to dissuade the Supreme Court from overturning Roe.

Yes, the bishops’ letter gives lip service to all those other Christian virtues, like serving the poor and marginalized. As an aside, the document even puts in a good word for protecting the planet. But the overall message remains clear: Abortion is the only issue that really matters.

Only two clerics tried to revise the letter. Cardinal Blase Cupich, archbishop of Chicago, and San Diego bishop Robert McElroy charged that the letter in its present form would fail to communicate the pope’s vision. Unlike the USCCB, Pope Francis clearly cares about a much larger moral universe than just abortion.: He regularly condemns corporate greed that penalizes workers, nationalism that shuts out refugees, and the global failure to care for the earth.

The letter, McElroy contended, “will allow people to use it to say that this [abortion] overcomes all other issues. It is not Catholic teaching that abortion is the pre-eminent issue that we face as a world.”

Their arguments did not carry much weight. The letter was approved by 207 bishops, with only 24 dissenting votes.

But is it really a “respect for life” that drives the leaders of the US church? Or is it misogyny, the sense that women lack the brains — or the moral character — to decide the fate of the fetuses that their bodies sustain? And if the bishops are so keen on reducing the number of abortions, the answer is quite simple: Do not stand in the way of access to safe, affordable contraception for any woman who wants to control the size of her family. After all, it is poor women who increasingly are most likely to seek abortions.

Instead, in 2014, the bishops campaigned against the Obama administration over the Affordable Care Act’s requirement that all employees of Catholic institutions have insurance coverage for birth control, even after the Obama White House excused those institutions from paying for it.

All this disheartens progressive Catholics. But the ramifications of the bishops’ message are even more distressing. In approving a document that essentially implies a candidate’s position on abortion is the most important qualification for voters to consider, the US Catholic church has given a pass to the scores of conservative priests and Catholics who continue to support Trump, despite his vast moral lapses.

Their position is particularly hard on practicing Catholics who happen to be running for president. Candidate Joe Biden, who supports legal abortion, already has been denied Holy Communion at one parish in South Carolina. He’ll probably face the same treatment elsewhere.

And in a close election, if Biden wins the nomination, his status as a “compromised” Catholic could make a difference. Voter surveys suggest that Catholics are more apt to vote their political party than their faith. Nevertheless, some older white Midwestern Catholics will likely consider what they hear from the pulpit when they cast their ballots. It doesn’t take too many of them to shift an election.

Nothing, however, is certain in 2020.  The constant drum beat of sexual abuse scandals over the past several years has eroded the credibility of the Catholic clergy. Next election season, It is possible that even devout Catholics will  pay little attention to what their bishops say.

The cartoon above was created by DonkeyHotey for WhoWhatWhy from these images: Archbishop José H Gomez – caricature (DonkeyHotey / Flickr – CC BY-SA 2.0),