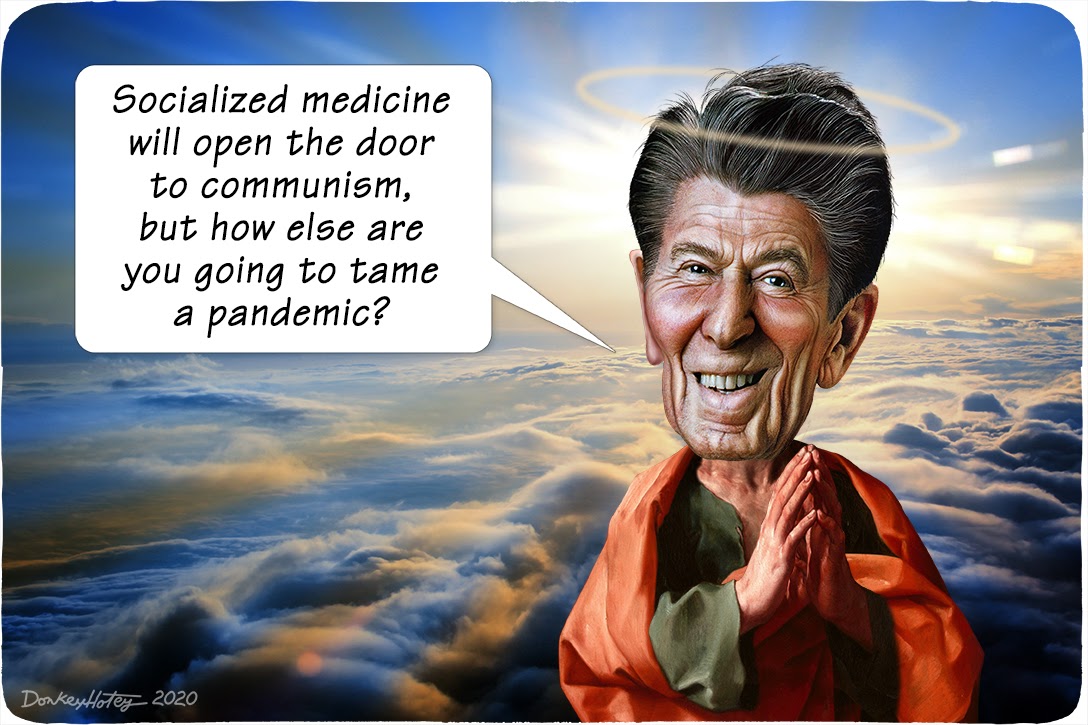 The Silver Lining in the Coronavirus

One of life’s more sublime pleasures is the sight of a zealous ideologue being hoisted with the petard of his own convictions, something Rep. Ted Yoho experienced last week. That’s when Yoho, a Florida Republican who like many of his colleagues hates Obamacare and advocates “market-driven” healthcare, found himself justifying federal spending to combat the COVID-19 virus with what we’ll politely call a post-partisan shrug: “You can look at it as socialized medicine, but in the face of an outbreak, a pandemic, what’s your options?”

Consistency, like grammar, does not seem to be a Yoho strong suit. But the same can be said for the entire Republican party, which often has difficulty squaring its rigid ideology with its real-world preferences. Political science has a term for this cognitive bias: hypocrisy. (Prediction: The viral reporting of Yoho’s quote will make his surname a verb, as in, “By admitting that Galileo was right, the Vatican Yohoed its claim to divine authority.”)

“Socialized medicine” has been the healthcare industry’s go-to scare phrase since at least 1945, when the California Medical Association deployed it to defeat a state proposal for compulsory health insurance. The phrase has been a hardy perennial ever since. It helped shoot down a Truman proposal for universal care. In 1961, the American Medical Association committed “Ronald Reagan Speaks Out Against Socialized Medicine” to vinyl and distributed it to ladies’ auxiliaries, assuring them that government-provided insurance for the elderly would lead straight to Stalincare.

The S-word still has a certain purchase on the American mind, as you can see on Donald Trump’s very own website, which urges folks to “reject the socialist model that rations care, restricts access, slashes quality, and forces patients onto endless waitlists. Instead, we believe in freedom.”

No, you believe in the socialist model; you just don’t know it.

Let us count the ways in which government interventions assure healthcare for people who would likely not have it in Ted Yoho’s fantasy marketplace, and let’s see how many the GOP is seriously trying to dismantle.

The most obvious are Medicare and Medicaid — socialized insurance programs for older and low-income people, respectively, that together cover more than a third of the population. There have been widely derided, crackpot proposals for abolishing or reforming these programs, among them Ben Carson’s plan to replace both with savings accounts into which the federal government would make annual contributions. Then there were Paul Ryan’s various plans to turn Medicare into a “premium-support” system doling out vouchers or lottery tickets or something. But note that even these loopy ideas retain a role for government.

The Veterans Health Administration (VHA), in particular, should incense market fundamentalists: It’s actually the only part of the federal healthcare safety net that is socialized medicine as most people understand the term — the government owns the hospitals, employs the staff, and so forth. But even an administration that is allegedly privatizing the VHA by stealth — allowing beneficiaries to seek private care under certain conditions — won’t openly pursue abolishing it; privatization in this case really means funneling VHA dollars to private providers. If Republicans really believe that market outcomes are better than government outcomes, shouldn’t they want to abolish it for the sake of veterans?

There are other, less obvious ways in which government encourages coverage beyond what a private market would: federal and state tax incentives that subsidize employer-provided plans; state-level “guaranteed-issue” laws, predating Obamacare, that prevent insurers from “risk selection” — aka “cherry picking” — customers; “minimum loss ratios” that limit how much insurers can spend on things other than actual care; state-level high-risk pools for the otherwise uninsurable; rules forbidding unfair denial of care; regulation of premium increases, and so on. Is there serious GOP opposition to these measures?

The clearest proof that Republican opposition to government-assisted healthcare is really just a cheap rhetorical weapon is what happened in 2017, when after years of threatening to “repeal and replace” Obamacare, they balked when finally given the chance. Congress left the law largely intact, even if it did effectively eliminate a key provision — the “individual mandate” requiring that people buy insurance if they can, an action which actually violates the conservative principle of personal responsibility.

True, a suit brought by red states seeking to abolish the entire Affordable Care Act is before the Supreme Court, but Senate Majority Leader Mitch McConnell (R-KY) has already promised to reinstate the core of the law — the ban on risk selection based on pre-existing conditions – should the case succeed. You might say he has Yohoed his party’s ritual denunciation of the law.

Apart from insurance, there is a vast array of government interventions that enhance public health, ranging from the Centers for Disease Control and Prevention to the Food and Drug Administration and the Occupational Safety and Health Administration, to name a few. You can argue that these are not socialized medicine per se, but since the GOP definition seems to encompass anything government does, it’s fair to count them.

So it’s a bit late to fret about a government “takeover” of healthcare, a favorite GOP trope. Government at all levels accounts for about 45 percent of US healthcare spending, more if you count the cost of subsidizing employer plans. Free-market purists who want to get that number to zero are free to show the courage of their convictions and say so.

If the coronavirus really was inflicted on China by the US military, let’s at least thank the Pentagon for helping to lay bare the ultimate GOP double standard: its fondness for pissing all over government even while invoking government as part of the solution. It’s easy to evangelize for a market-driven healthcare system when you know you’ll never have to live in one.