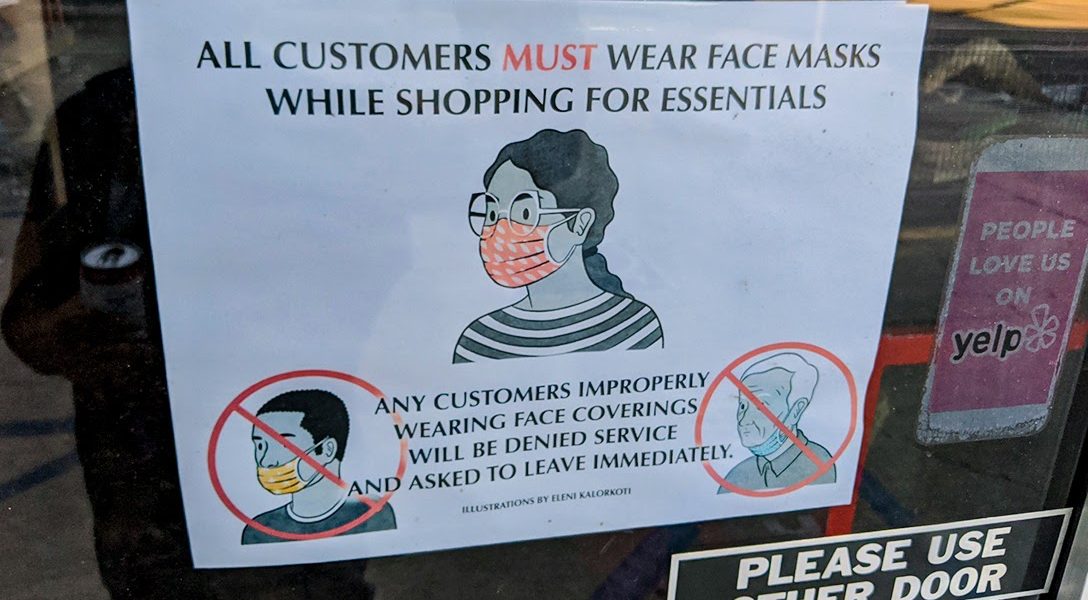 The US Chamber of Commerce and other business groups have courageously…

Wait a minute! What the hell am I talking about?

I was going to write approvingly about how the chamber and its allies are calling for nationwide rules requiring everyone to wear face masks while indoors in public places, especially locations like airport terminals, buses and subways, shopping malls, and individual stores.

But considering that America’s Demander in Chief doesn’t like masks and won’t wear one himself, such national standards are not — repeat ARE NOT — going to happen. So what’s the responsible thing for private companies to do, in view of a pandemic that has already killed more than 130,000 people in this country?

Here’s a solution so easy a caveman could do it: Post a sign at the entrance to every retail establishment, from big-box emporiums to mom-and-pop stores, saying anybody who wants to come inside must wear a mask. Period. Full stop. No discussion.

If it’s OK for stores to announce “no shirts, no shoes, no service,” they should be willing to say, in effect, “Go spread disease somewhere else.” Will this annoy some customers? Undoubtedly. Will (some) red-state governors and mayors object? Of course. Will some members of the Deplorable Party insist on exercising their constitutional right to infect fellow Americans with a potentially lethal disease, and start carrying assault rifles on shopping trips to bully anybody who gets in their way? Yes.

However, no adults in the White House or Congress (assuming they even exist) appear ready to approve a simple regulation that could prevent thousands, or even hundreds of thousands, of unnecessary deaths. So what’s the alternative for those of us who want to a) stay alive or b) help others to do the same?

On July 2, the chamber and allies, including the Business Roundtable and National Retail Federation, wrote a letter to President Trump, Vice President Pence, and the National Governors Association on the topic of face coverings, expressing “concerns.” (I’m not making this up.)

Ignorant Florida man without mask screams and spreads spit at elderly woman who asked him to please wear a mask and the man who defended her because “he feels threatened!” #COVID19 #COVIDー19 #coronavirus

It says that wearing masks “is a critical element to preventing the spread of COVID-19.” (Agreed.) It continues that without “stronger measures to prevent transmission” there could be a new round of shutdowns “and irreparable economic harm.” (No argument there.) Oddly, the signers didn’t mention another benefit of masks (preventing vast numbers of people from dying), but maybe they were in a hurry.

The letter goes on to “request” that the White House Coronavirus Task Force and governors “work together” to yadda, yadda, yadda. Actually, Trump said in May that the task force would be winding down (and I expected him to trot out President George W. Bush to declare “mission accomplished.”) But it’s kept limping along, even after Rep. Andy Biggs (R-AZ), chairman of the ultra-right House Freedom Caucus, said a few days ago it was time to shut down the whole shebang.

So, to summarize: 1) Masks save lives, and 2) in many or most places, nobody’s required to wear them. So 3) what should we do about it?

With Theaters Dark, a Broadway Seamstress Sews for a New Reason

Well, here’s a baby step: The Chamber, the Federation, the Roundtable and anyone else who claims to represent American business should tell — not ask, tell — their members to require masks or close their doors.

Now there’s a nationwide standard. Among other things, it would provide cover for timid retailers who could point out: “This is the rule. We’re complying.”

The US has already demonstrated its inability to control COVID-19 — something that makes “American exceptionalism” laughable (though nobody’s smiling). Maybe, just maybe, it’s time to do something different.

Many states are setting daily records for new COVID-19 cases, and the lines on graphs that had (briefly) shown hospitalizations declining have already reversed direction, and deaths will soon follow suit with a vengeance. So far, about 3 million Americans have been diagnosed with the virus, leaving only 325 million more still eligible to be infected. Again, a reminder that this isn’t a friendly political discussion about the latest polls or the Electoral College. IT’S ABOUT PEOPLE DYING. I don’t know any simpler way to say it.

So, Chamber of Commerce, et al., do the right thing. For every complaint from somebody who won’t wear a face mask, there will be millions of people who agree with you. The time for talk is long gone.

Many people with religious beliefs anticipate a judgment day when seeking to enter heaven. For future applicants to the pearly gates who dithered and dallied during the Great Pandemic of 2020 instead of showing true leadership, expect the Almighty to notice the blood on your hands.

The author, Graham Vink, worked as an award-winning US newspaper journalist for two decades before spending almost five years in Asia, where he saw how Hong Kong, Singapore, and Taiwan coped with a different pandemic threat: bird flu. The opinions expressed are his own.