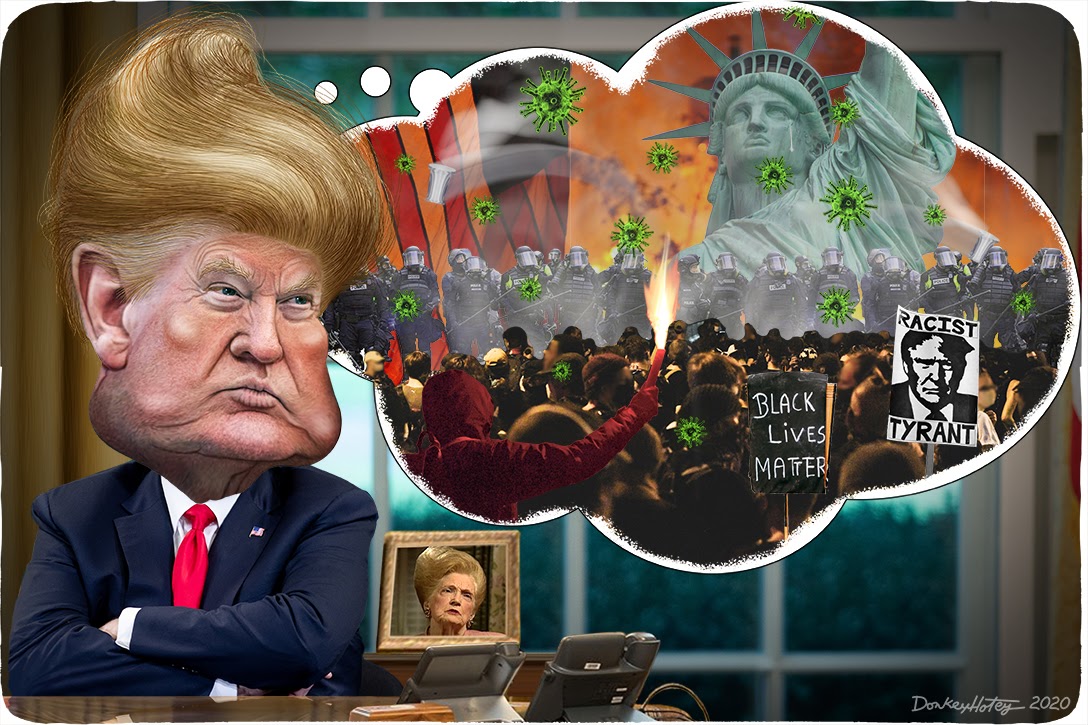 With multiple firestorms creating chaos around Donald Trump’s election campaign, it is easy to forget that it also took a Republican Senate majority and the radical conservative wing of the GOP to bring us to this point. We now face simultaneous threats from a biological menace, an impending economic disaster that is likely to leave millions jobless and very likely homeless, and unresolved racial and ethnic tensions that threaten to drive the country toward even deeper and more troubling social unrest.

The principal question for voters to decide on November 3 is whether Americans want to continue down this path or if we are finally ready to try something else. Normally, it should not be a difficult decision. The first priority for any government is to protect the health, safety, and welfare of its citizens. The current administration has failed miserably on all counts. To make matters worse, Trump not only refused to put together a coherent plan for dealing with the crisis, but he made the situation worse by sidelining medical experts and misleading the American public. The final cost of Trump’s failure to lead is more than 200,000 American deaths, a number that could eventually climb as high as 300,000. And that does not take into account the economic fallout from the pandemic, which might eventually lead to a downturn that rivals the Great Depression.

His handling of the COVID-19 pandemic is just one of Trump’s catastrophic misjudgments. The president’s brazen denial of climate change and his uncritical support for the coal and oil industries may prove even more damaging. At least 10 percent of Oregon’s population — roughly 500,000 people — had to be evacuated last week due to uncontrollable wildfires that have engulfed whole cities. In California, more than 3 million acres have gone up in smoke. Incredibly, Trump sued California in order to force the state to stop insisting on tougher standards for auto emissions, even though they are a major contributor to air pollution and climate change.

By now, it should be clear to just about everyone who and what Trump really is: a narcissistic former reality TV personality who has been in over his head for the last four years. If Trump goes down in defeat on November 3 (or whenever the last votes are finally counted), many will see it as a relief. But the Republican party will still be home to extreme conservatives — many of them launched by the Tea Party movement. These ideologues have run interference for the president during the last four years, and their parallel agenda remains intact even if voters send Trump shuffling off to Buffalo.

At day’s end, these hard-right Republicans must share the blame for making these current multiple fiascos possible. The real question is whether the Trump presidency amounts to a last hurrah for the Grand Old Party as we know it.

While Trump hogs the spotlight, relishes chaos, and appears to be driven by uncontrollable narcissism, the pseudo-conservative radicals who supported Trump over the last four years were driven by motives that in the end were different, but just as destructive, as those that motivated Trump.

The driving philosophy behind this ultra-conservative movement can be summed up as “No government is good government.” Many of today’s problems, which include collapsing infrastructure, unaffordable healthcare, and deteriorating educational standards, can be attributed to a Republican crusade against both the federal government and the civil service system that makes government function. Trump’s campaign against the US Postal Service is just the latest manifestation.

A helpful political rule of thumb is that when somebody says “It’s not about the money,” it often is about the money. For Republican leaders and the ultra-rich who finance them, it’s all about taxes. Their anti-government principles really translate to “No tax is a good tax,” especially if the tax in question affects trillion-dollar corporations or just run-of-the-mill billionaires. Trump’s refusal to reveal his own IRS tax records, despite a precedent set by previous presidents of both parties, reveals a chutzpah that warms the hearts of his supporters.

Probably the most determined proponent of the anti-tax approach is Grover Norquist, a libertarian political activist, who founded Americans for Tax Reform and convinced Republican senators and congressmen to sign a pledge to reject even marginal tax increases, regardless of the situation. Norquist famously told NPR in 2001, “I don’t want to abolish government. I simply want to reduce it to the size where I could drag it into the bathroom and drown it in the bathtub.” Taken to the extreme, this libertarian argument amounts to a license to shirk civic responsibility, especially for the multinational corporations that do their best to shield profits by shifting them to lower-tax countries.

This argument is not new. Its roots extend back to the American Revolution. When the 13 original colonies broke free from England, they initially created a loose confederation. Each new state jealously guarded its own independence, issued its own money, and maintained its own militia under the early Articles of Confederation.

The result was chaos and administrative paralysis. The pivotal crisis arose when veterans of the Continental Army, who had fought in the Revolution and survived the winter with George Washington at Valley Forge, demanded to be paid for their five years of military service. Some states were more than able to honor the debt; others were not.

Angry veterans marched on Philadelphia, where Congress was in session. The Pennsylvania militia refused to intervene, and a panic-stricken Congress fled, first to Princeton, NJ, then to Annapolis, MD, and finally to Trenton, NJ. Alexander Hamilton, who was determined to put the confederation’s finances in order, attended a conference in Annapolis where he argued that the debt to soldiers should be consolidated so that it could be paid by a national government.

Hamilton persuaded the soldiers that Congress would address their concerns at a later meeting in Philadelphia. That meeting grew into the Constitutional Convention, which over a four-month period not only drafted what was to become the Constitution, but also created our federal government, authorized a standing army, and carved out a quasi-independent District of Columbia to house the new capital. Even more importantly, the convention authorized the federal government to establish a national treasury with a single currency, the US dollar.

None of this was easily achieved. Numerous critics, including Thomas Jefferson, feared that a national government with control over the states would eventually degenerate into tyranny. History proved the anti-Federalist critics wrong.

Had a national government not been established at that moment in time, it is doubtful that the 13 original states would have remained independent for long. Florida was Spanish. New Orleans was French. West of the Mississippi belonged to Spain. The dilemma dating back to those early days has always been how to blend so many conflicting points of view and economic necessities into a single national identity.

The great seal of the United States, created in 1782, carried the motto “E Pluribus Unum” (“From Many, One”). Benjamin Franklin said it better: “We hang together, or we hang separately.” Until now, the United States has been extraordinarily successful in forging a single country from a diverse population. It is this success that has made America unique in the world. It is this principle that Donald Trump and hard-right Republicans have tried to overturn in their eagerness to inflame racial and ethnic tensions for political advantage.

Demographic diversity in America has been turning against the Republicans, who see their political base steadily shrinking. In a sense, Trump was their last great white hope.

What libertarians and ultra-right conservatives describe as “freedom” has always been a kind of freedom from social responsibility. Their agenda, backed by billionaire donors, has been to break down government, eliminate regulations, and exploit what they like to consider the “free market” without restraint.

The latter half of the 19th century was marked by a series of increasingly dramatic booms and busts, which culminated in the Great Depression. Many rules and regulations instituted by Franklin D. Roosevelt’s New Deal were intended both to end the crushing poverty caused by the collapse and to make certain the same kind of economic disaster did not happen again.

Many Republicans never accepted the New Deal, whose programs to provide relief and create jobs dramatically expanded the role of government. One example was the Social Security retirement system, signed into law in 1935 — the first step in a gradual expansion of the economic safety net that protects less fortunate Americans.

Today, that safety net, along with laws to preserve the environment, protect consumers, and prevent the worst excesses of unregulated capitalism, is precisely what Trump and his allies are seeking to destroy, under the guise of “cutting taxes.”

No one enjoys paying taxes, but they are — in essence —  an investment in America. Without support for programs to help equalize opportunity, the country will slide backwards, crippling itself with poverty and ignorance. Donald Trump was never going to “Make America Great Again.” He is effectively destroying it.

Demographic diversity in America has been turning against the Republicans, who see their political base steadily shrinking. In a sense, Trump was their last great white hope. He managed to squeak through to victory in 2016 by playing rural America against the larger urban population in the cities. Although Hillary Clinton drew 3 million more votes nationwide, Trump’s strategy produced a victory in the Electoral College and won him the presidency. It’s doubtful that it will work again.

Today, America’s challenges include the coronavirus pandemic, the resulting economic disaster, the wildfires in California and Oregon, and the continuing protests over unjustified police killings, inequality, and Black Lives Matter. All these demonstrate what happens when there is no federal government, or when it has been so weakened and distracted from its true purpose that it can no longer act, or, as in Trump’s case, when it acts irresponsibly.

Winston Churchill pointed out that democracy is the worst form of government — except for all the rest. But it has one undeniable benefit: periodically allowing voters to throw the rascals out. America’s current approach to government, as guided by Trump and his merry band of conservative zealots, isn’t working, but the November elections provide the opportunity to change course. Let’s hope we don’t blow our chance to set things right.