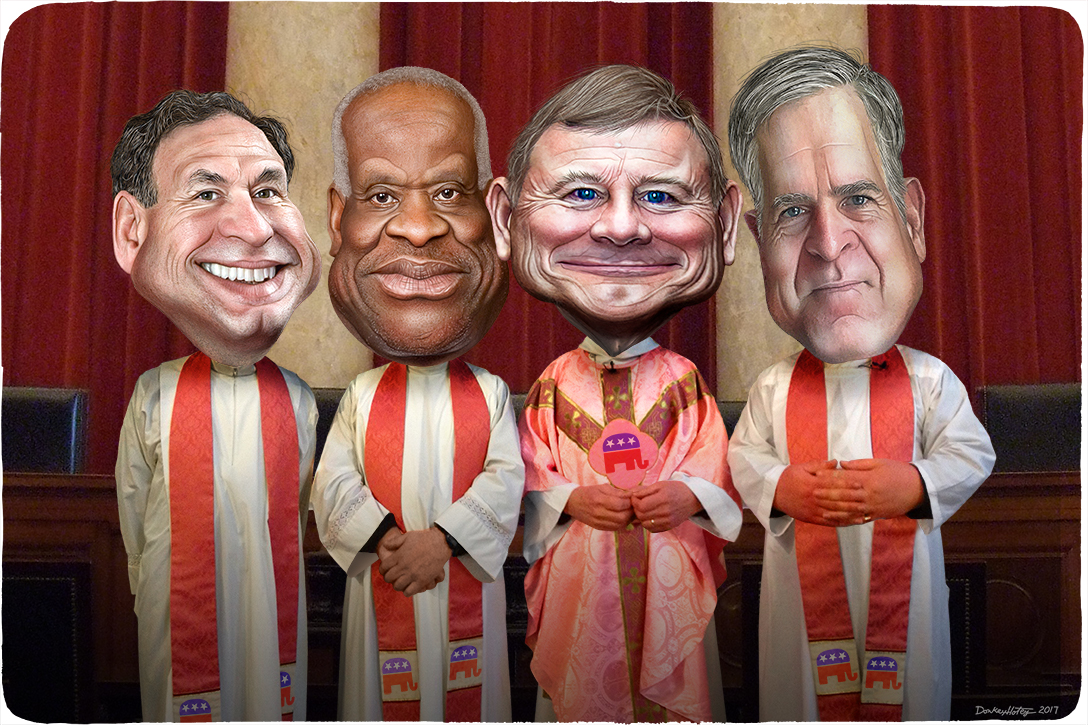 Is the Separation Between Church and State about to Crumble?

When people complain that President Donald Trump and his administration are threatening the First Amendment, they usually think about assaults on the freedom of the press. Just as troubling, however, is that conservatives on the highest levels of all branches of government are blurring the lines between the state and religion.

Vice President Mike Pence, arguably one of the biggest religious zealots ever on a presidential ticket, is a prime example. He makes no secret of his priorities and allegiances. When Pence addressed the World Summit in Defense of Persecuted Christians in Washington earlier this year, he proudly said that he is a Christian first, then a conservative and then a Republican. At the event, the vice president also claimed that “no people of faith today face greater hostility or hatred than the followers of Christ.”

Fortunately, the Founding Fathers put in place measures to stop people like Pence from forcing their beliefs on others. In addition to making the prohibition of a state religion the very first thing mentioned in the Bill of Rights, they also added checks and balances to ensure that the Supreme Court would prevent any such laws from being enacted.

Ground Zero in the battle between the secularism the Founding Fathers instilled in the United States and the fundamentalism of the so-called religious right are gay marriage and anything associated with reproductive rights.

With the law no longer going their way, evangelical Christians are increasingly insisting on the right to discriminate against others on the basis of their “religious freedom.” This includes state governments trying to make things difficult for same-sex couples and business owners refusing to serve gays or to cover birth control as part of their insurance plans.

In addition, there have been cases of religiously affiliated schools firing pregnant employees who were not married.

Several health care or educational institutions engaging in these and other practices receive government funding of some sort, which means that taxpayers are subsidizing their discrimination.

So far, the safeguards put in place are largely holding. Last week, the Supreme Court ruled that Arkansas authorities must list the names of both parents on the birth certificate of a same-sex couple’s child.

However, the opinion to reverse an Arkansas court decision summarily (meaning that the facts of the case were so clear that no oral arguments were needed), was not unanimous and therefore revealed a problem the Founders might not have anticipated. What if the Supreme Court is also stacked with religious zealots?

Three justices joined in a dissent written by Neil Gorsuch, the court’s newest member. The others were Sam Alito and Clarence Thomas, the most reliably conservative members of the court.

That’s not yet enough to make this a Supreme Court dominated by Christian fundamentalists — but we are not that far away. Chief Justice John Roberts already votes with the trio on many social issues, and rumors that one of the other justices will retire soon are getting louder every year.

With Trump’s legislative agenda stalled, the biggest win he can give his staunchly conservative base is another justice in the mold of Gorsuch. If that happens, the last firewall standing between the country and a fundamentalist Christian agenda would have major cracks.

And the next cases are already on the docket. The court announced last week that it would hear the appeal of a Colorado baker who refused to make a wedding cake for two men. And on Friday, the all-Republican Texas Supreme Court decided, in a seemingly absurd unanimous decision, that gay spouses may not be entitled to government-subsidized workplace benefits.