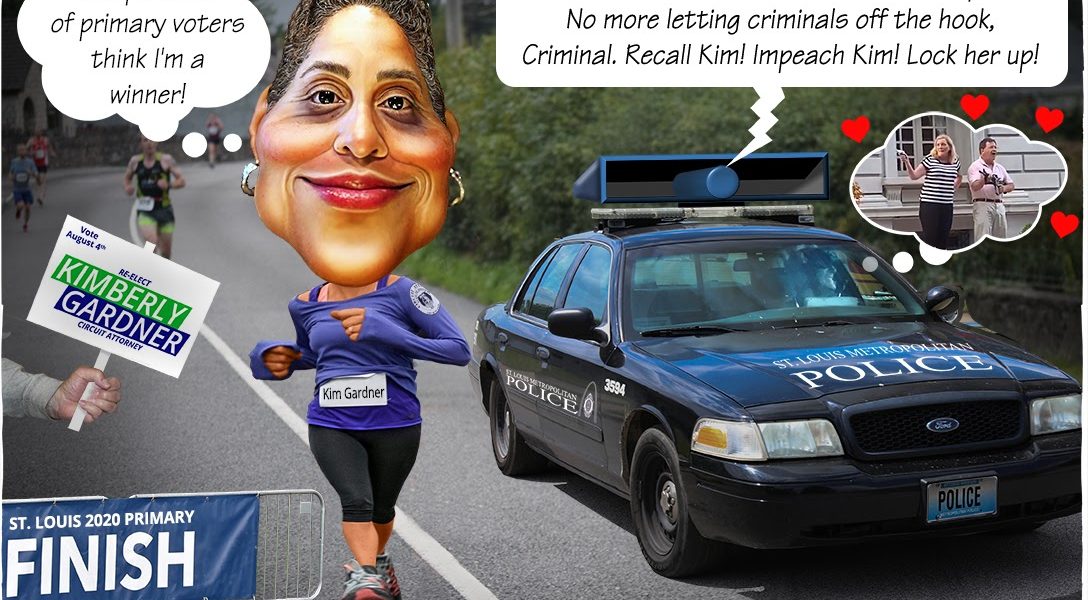 After a St. Louis husband and wife were captured on video waving an assault rifle and pistol at Black Lives Matter protesters, many observers thought justice was served when St. Louis Circuit Attorney Kim Gardner filed charges against the couple.

But many Republicans saw something different: an opportunity to attack Gardner, a Democrat, before the August 4 primary for her reelection bid. Criticism poured in from all corners of the GOP political landscape, from death threats left on her car to Trump virtual campaign events featuring Mark and Patricia McCloskey which were apparently designed to call into question the legitimacy of the search warrant and eventual indictment issued by Gardner’s office for the gun-wielding couple.

I had the privilege to be inside Gardner’s campaign as it happened. Serving as the finance director, my role naturally put me in direct contact with Gardner and many of her supporters on a daily basis.

Campaigns by their nature are chaotic instruments, lean in staffing and flexible to whatever the news cycle may bring to the fore. However, I have never before experienced fundraising calls canceled during a campaign due to death threats, or several days of work interrupted after protesters learned the candidate’s home address and decided to camp there for the weekend.

Many candidates, whatever their politics, take positions that annoy voters. And people who work in the criminal justice system, especially judges and prosecutors, are no strangers to threats of retribution. Having worked on campaigns for judges, I can attest that this is nothing newsworthy.

However, what’s unique about this story is the intensity and scale of that criticism. The asymmetrical level of vitriol that spewed forth in reaction to Gardner investigating the McCloskeys — including the aforementioned death threats and efforts to intimidate Gardner at her home — is something that progressive Black women with political power experience on a daily basis.

Fortunately, no shots were fired during the June 28 incident. However, after a St. Louis police investigation, Gardner filed felony weapons charges against the McCloskeys. The case is still pending, but President Trump’s lead role in celebrating the McCloskeys and vilifying Gardner was reprised shortly by two prominent Missouri Republicans: Gov. Mike Parson and Sen. Josh Hawley, both of whom have an extensive history with the circuit attorney.

In February 2018, Gardner’s investigation of then-Gov. Eric Greitens (R) for allegedly taking a compromising photo of a woman with whom he had an affair led to his resignation and the succession of Parson, then the lieutenant governor, to his current role. Hawley also has a history of disagreements with the St. Louis circuit attorney’s office, dating back to his own time as Missouri’s attorney general.

The governor promised to pardon the McCloskeys if they were convicted, saying the prosecutor’s actions “defy common sense.” Hawley, in turn, appealed to Attorney General William Barr to investigate Gardner’s office for an unacceptable abuse of power.

Gardner doesn’t fear scrutiny or competition; in high school, she was twice a state cross country champion. But whenever she has announced a new initiative or applied prosecutorial discretion during an investigation, powerful politicians have attacked. The timing of the McCloskey imbroglio was particularly convenient for GOP critics, coming only a month before the primary elections for Gardner and Parson (who both won handily).

Elected in 2016 on a platform of reforming the justice system, Gardner has left an indelible mark on the prosecutor’s office — for better or worse. Three years into her first term, staff turnover has exceeded 100 percent. Outside observers have noted that the prosecutor’s trial conviction rate has fallen nearly 20 percent, but her office points out that more than 90 percent of its cases end in a plea deal.

Supporters also showcase Gardner’s Community Engagement and Strategic Partnerships program, launched in 2017, that utilizes a wide range of diversion and rehabilitation options for many defendants. In fact, when announcing charges against the McCloskeys, Gardner said she was open to recommending a diversion program for them, instead of potential prison time.

The prosecutor also created an “exclusion list” of police officers whom the office deemed untrustworthy and whose testimony would therefore be reviewed before cases in which their input could be the deciding factor in conviction. For progressive and reform-minded activists, the St. Louis prosecutor’s office is leading the way in reshaping what equality before the law can mean.

For all four years of Gardner’s first term, she has been the subject of consistent media and political attention. Even prior to the reelection campaign, the head of the police union in St. Louis called her a criminal and a special prosecutor was assigned to investigate her investigation of the sitting governor.

Gardner is not the only progressive prosecutor facing criticism or outrage related to her work. In Florida, for example, the governor reassigned 22 first-degree murder cases from Orlando’s chief prosecutor in 2017 because she refused to seek the death penalty. Other district attorneys elected in recent years promising a different approach to criminal justice have been the subjects of lawsuits or legislation seeking to limit or overrule their decisions.

Black female prosecutors are frequent targets. These attacks are often couched in language framing them as lacking experience or competence. The campaign against Gardner was no exception, with her leading opponent, former prosecutor Mary Pat Carl, emphasizing her own strengths as being “smart on crime” and “having worked thousands of cases.” Third party “dark money” groups tied to the police union echoed this narrative, with hundreds of thousands of dollars being spent in an election for only 200,000 constituents.

Since Gardner had served as circuit attorney for nearly four years, these appeals to a lack of experience held a certain hypocrisy and continued a national pattern of labeling Black women prosecutors as lacking the competence to do their jobs.

However, attacks on Gardner’s credibility and experience failed to convince Democratic primary voters. Gardner overwhelmed Carl by a 61-39 percent margin and is expected to defeat her Republican opponent in November.

The general election in this country will be a referendum on a great many issues, from the integrity of our election process to the handling of the COVID-19 pandemic. But it will also be the stick by which the progress of the Black Lives Matter movement will be measured. Gardner’s race for circuit attorney is a clarion call to all progressives; when you put criminal justice reform first, and worry about the political cacophony second, the votes will follow.