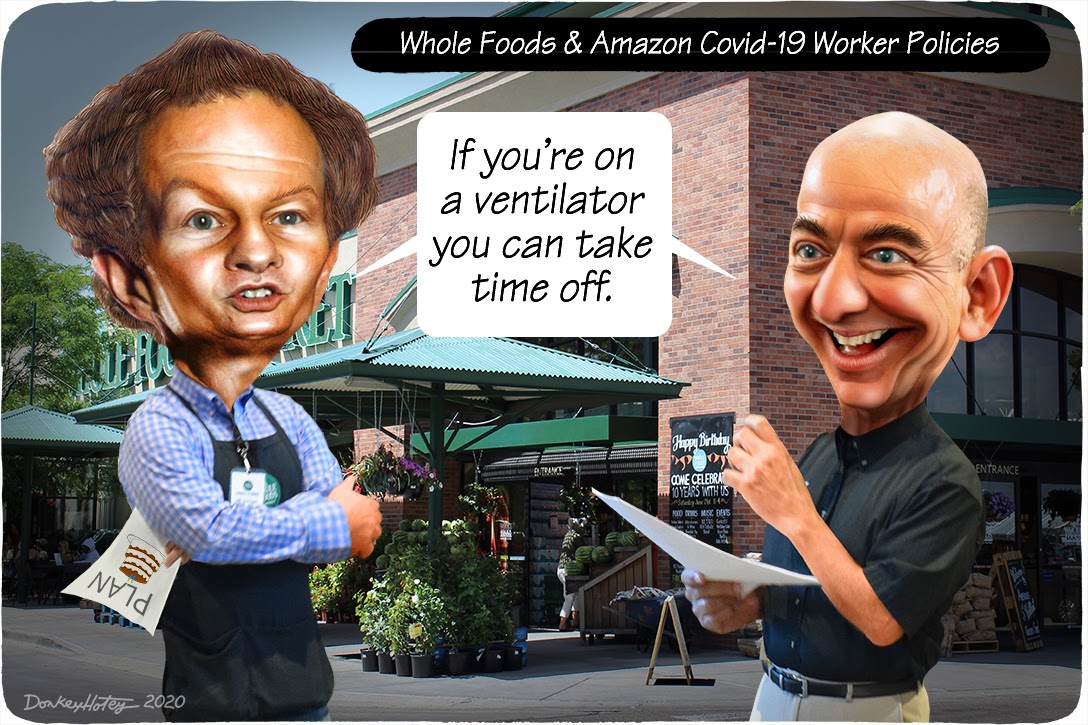 As a customer walked into Whole Foods, a grocery clerk reportedly heard this cell phone conversation: “I’m pretty sure I have it; I’m going to the doctor now. I just have to stop at Whole Foods first.”

That anecdote illustrates the dangers grocery workers now face every day. Their lives are at stake, and if they work for certain chains, so is their economic well-being.

Whole Foods may have many foodie fans who prefer its fresh fruits and vegetables, but the company seems willing to let its workers wilt.

Whole Foods CEO John Mackey helpfully suggested recently that his employees who managed to avoid COVID-19 donate some of their paid time off to their less fortunate colleagues who may have exhausted the two weeks of paid sick time Whole Foods gives to workers who test positive for the coronavirus.

Of course, as everyone knows by now, it’s really hard, even if you’re quite sick, to even get tested for COVID-19. Unless Whole Foods workers keep lists of the travel activities of the customers they encountered, and also their contact information, it’s difficult to know whether any illness short of a full-scale medical emergency would meet the criteria for tests.

Bezos Offers a Choice: Your Health or Your Paycheck

“With our economy spiraling and millions of workers struggling, the last thing Whole Foods workers need is to be told by a CEO worth millions that they have to choose between their health and their paycheck,” charged Marc Perrone, head of the United Food and Commercial Workers.

A similar policy holds true for Amazon workers. Both companies are owned by Jeff Bezos, who also owns the Washington Post. Billionaire Bezos is known for his abhorrence of unions, and for the implacable demands made on Amazon workers who prepare goods for shipment. As social-distancing Americans stay at home and rely on Amazon even more, the company, which employs nearly 800,000, likely will grow even more profitable. It has announced plans to hire 100,000 more workers.

While Amazon profits soar, however, conditions have gotten so bad at both Whole Foods and Amazon warehouses that, on Wednesday, 14 state attorneys general sent a letter to Bezos and Mackey urging them to make their sick leave policies more humane.

“By limiting paid sick leave to only those employees who have been diagnosed with COVID-19 or who have been placed into quarantine,” the letter states, the companies “are placing their other employees, their customers, and the public at large at significant risk of exposure to COVID-19.”

The state AGs charged that the companies’ “narrow criteria is particularly insufficient given the realities of the public health crisis, where the lack of access to COVID-19 testing has been widely reported.” Such policies, they warned, “seriously undercut efforts to promote ‘social distancing’ in order to ‘flatten the curve’ of infections and to avoid overloading our already strained health care system.”

“By limiting paid sick leave to only those employees who have been diagnosed with COVID-19 or who have been placed into quarantine,” the letter states, the companies “are placing their other employees, their customers, and the public at large at significant risk of exposure to COVID-19.”

Bezos and Mackey aren’t the only villains in the ongoing COVID-19 drama.

On Friday, Instacart shoppers, who go to the grocery store so we don’t have to, threatened to strike. Shoppers charge that the company’s profits are surging as they risk their lives. They want hazard pay for their work, as well as hand sanitizer and disinfectant.

Trader Joe’s laid-back and friendly ambience makes it a favorite for many consumers, but employees of the grocery store chain are complaining that little has been done to ensure social distancing in the stores, which often are far smaller than typical supermarkets.

Some workers have charged that they’re not allowed to wear gloves because the practice goes against the Trader Joe vibe.

As of March 25, Trader Joe’s had temporarily closed six stores in New York and New Jersey after confirmed or suspected cases of COVID-19 in workers had been identified.

The list of companies failing to protect workers’ health and economic stability also includes other ride-sharing and food-delivery firms such as Uber, Lyft, and Doordash. Even after New York and California lawmakers passed laws extending unemployment benefits to gig workers like them, Uber and Lyft workers allege that their companies have been slow to comply with filing the required paperwork.

Delivery and warehouse workers at UPS and XPO Logistics also have complained about having to go to work sick, for fear of losing their jobs.

Let’s face it. Many of us haven’t ever noticed the day-to-day injustices encountered by those who make our lives a lot easier. It’s taken a pandemic to wake us up.

Think of the “hidden figures” whom we routinely depend on: postal workers, grocery clerks, delivery drivers, and Amazon warehouse staff who bring us pizza, Chinese takeout, and an assortment of fast-food delights without our ever leaving home.

We may tip them, but they’ve largely remained in the shadows, nameless enablers of our routines — the people who have kept us fat and happy.

But now, as they continue to make life endurable in a pandemic, they deserve a lot more. Most of us can’t give them significant raises or benefits. We can’t keep them safe from coronavirus.

But we can begin to understand the pressures they are under, and we can commit to small acts of consideration and kindness that can potentially make a difference. Here are some tips:

Small Acts of Consideration and Kindness

Grocery clerks: You may be hungry, but if you are sick, don’t go to the grocery store. Ask someone who’s healthy to do your shopping. Grocery clerks are putting their lives on the line every day so we don’t lose our access to cookies, chips, coffee, cola, and toilet paper. Avoid paying with cash. Having to handle “dirty money” exposes clerks to innumerable microbes, potentially including coronavirus. Digital methods of payment are safer for consumers and employees. And keep your distance, as much as possible.

None of us can do without food, but we can make choices about the stores we patronize.

To their credit, supermarket chains such as Safeway, Wegmans, Giant Foods, Harris Teeter, Kroger, Walmart, and Albertsons are beginning to install plexiglass shields between customers and cashiers and are implementing ways to encourage social distancing.

Warehouse workers: An Amazon warehouse has never been a worker’s paradise. For years, workers have complained about intense pressure to get hundreds of thousands of goods ready for delivery. And last year, the New York Committee for Occupational Safety and Health found that at Amazon’s Staten Island warehouse workers sustained injuries at a rate three times higher than the national average.

Workers in 10 Amazon warehouses in the US have tested positive for COVID-19, and employees are asking the company to do more to ensure their safety as they face sharply higher consumer demands.

We can’t give Bezos a heart, but we do have power to at least reduce some of the demand. We should think twice before ordering anything nonessential from Amazon.

Mail carriers: “I had to buy my own gloves,” my mail carrier told me. Ditto for his supply of hand sanitizer. While the US Postal Service insists that it is giving supplies to every employee who asks for them, the anecdotal evidence contradicts that assertion. Ask your carrier about those supplies, and offer to donate them if you can spare something from your own reserves.

All other delivery persons: You and they probably are safer if they leave packages outside your door whenever possible. For delivery persons who can accept them, include a digital tip, or enclose one in an envelope left for them. If you can, make it a big one.

A massive federal stimulus law likely will give these workers some financial relief. But the pandemic only highlights the struggles they’ve contended with for decades.

Sooner or later, coronavirus will be tamed. Let’s hope that as our fears begin to ebb, our concerns about the welfare of the people who sustained us during this crisis do not disappear.