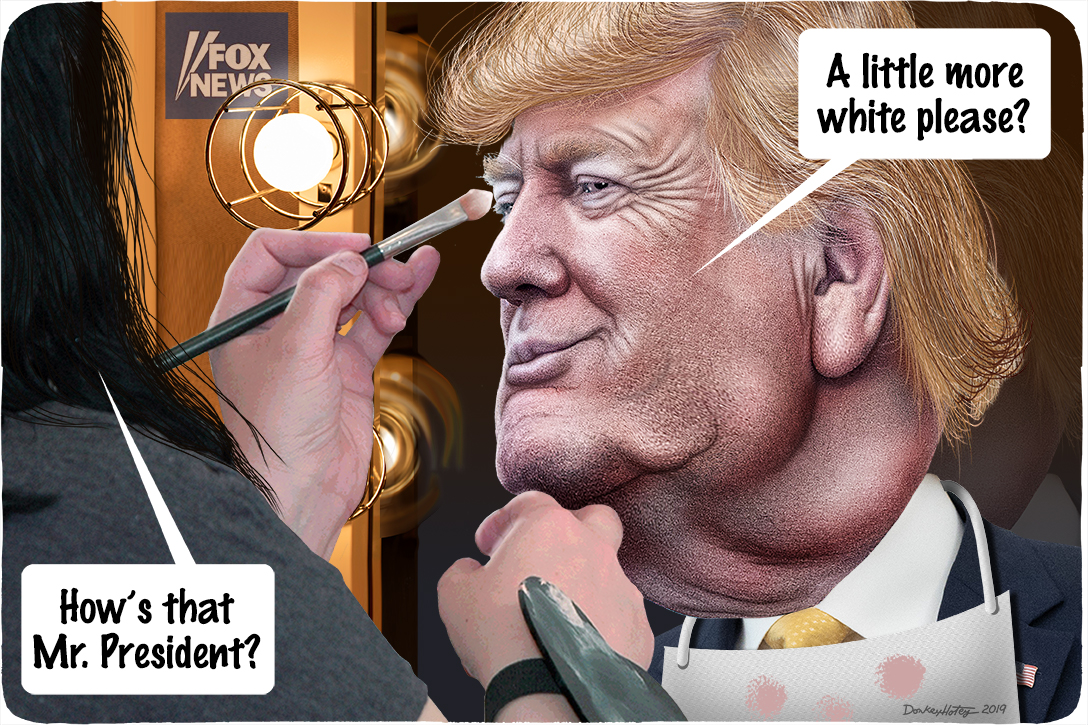 This country has an addiction problem. No, we’re not referring to the dependence of millions of Americans on opioids.

The “addict” in this case is the president of the United States. He is addicted to public attention. (We  will not refer to the president by name here, hoping to set a virtuous example.)

The “enablers” are journalists and the rest of us, who reward his inappropriate behavior with ever more headlines, just feeding and enlarging his insatiable cravings.

The president has always been very good at drawing media interest, a talent the media often reports on. In March 2016, before he had even clinched his party’s nomination, the current president received $2 billion worth of “earned media” — news coverage that is not paid for. That was twice as much coverage as Hillary Clinton “earned,” and more than her Democratic rival, Sen. Bernie Sanders (D-VT).

The New York Times reported this story as if it were a natural phenomenon — not driven by the inclination of reporters to go after stories that featured outrageous statements, conflict, and unpredictability. Combine that with his direct attacks on the news media at his campaign rallies, and he was far too compelling not to cover.

But even bombast can get old. Last year, public interest in his outrageous tweets and rhetoric seemed to decline. Opposition to the president no longer was driving up the number of subscriptions to the Times, and there was a drop in network news viewers. Even before the crucial 2018 midterms, acknowledged as a referendum on the current administration, cable news outlets were dropping their coverage of the president’s political rallies because they no longer generated an upsurge in audience. Even Fox News was cutting back a bit.

There was evidence that even his tweets had lost some of their power; he was sending out more tweets, it appeared, to sustain the engagement of his followers.

But now the president has beefed up his act. He’s turning problems into crises, issuing doomsday warnings about what he intends to do about these crises, and then postponing or resolving them.

His most dramatic gambit so far was his last-minute decision to cancel an air strike against Iran. He pulled back from the attack, he claimed, after he learned that it could result in the deaths of 150 Iranians.

In this case, Iran may have helped intensify the conflict, but bringing the US to the edge of war with just ten minutes to spare was an act of showmanship, not leadership.

Granted, later reporting cited unnamed administration officials who claimed that the president had actually received the casualty estimate during an earlier briefing.  Nevertheless, the overwhelming impression left by the initial accounts was that the chief executive had overruled the defense hawks and saved the day. The president’s tweet about the bombs being “cocked and loaded” to describe the moment — which the media obligingly translated to “locked and loaded” — got even more play when he told his story to Chuck Todd, moderator of NBC’s Meet The Press.

Journalists have become showrunners for the president’s ongoing reality series. They parse his words, quote his tweets, and obsess over his future actions. So preoccupied with these successive and relentless “news” events, they have little time to dispassionately analyze the president’s role in creating crises, or to fact-check his claims. Even when the fact-checking occurs, it does so after the initial news accounts have aligned with the president’s script.

And he’s doing it with alarming regularity. Consider his threats to round up and deport “millions” of undocumented immigrants. He first lobbed this grenade on June 18, hours before he launched his reelection campaign. “Next week ICE (Immigration and Customs Enforcement) will begin the process of removing millions of illegal aliens who have illicitly found their way into the United States,” he warned.

His pronouncement reportedly caught ICE officials off guard, and subsequent reporting found that those “millions” marked for deportation likely would be more in the range of a few thousand.

Nevertheless, the threat, and the headlines it immediately generated, unsettled local officials, generated even more fear and uncertainly for undocumented immigrants, and sent the organizations trying to help them into near-panic mode.

Of course, once this part of the scenario played out, the president then retreated, postponing his mass roundup for at least two weeks, presumably to give Congress — particularly House Democrats — time to “fix” the immigration laws he so despises.

By keeping the drama going with a two-week pause in the action, the president, like any good reality-show producer, is keeping his audience engaged. This keeps the suspense red-hot and the attention riveted on the oval office. What will happen in two weeks?

Hooked now on his power to summon headlines far greater than he ever experienced on The Apprentice, with the whole world in his thrall, the president must gain reelection to feed his ever growing need for the spotlight.

He has been giving “exclusive” interviews to many mainstream media outlets, clearly attempting to gain still more exposure.

Given his penchant for belligerently pushing back whenever challenged, he’s guaranteed that one interview will result in hundreds of headlines in print and online news sites. When he told ABC News anchor George Stephanopoulos that he’d be willing to accept “dirt” on an election opponent offered by a foreign government, his remark triggered an avalanche of consternation and criticism. But it really didn’t tell us anything we didn’t know.

These interviews just stoke the outrage, and raise the blood pressure of media consumers who care about the Constitution and the rule of law.

Journalists are in a tough spot, trying to report the news while not making the news all about the president. But here is a modest proposal: Put the president on an attention diet. One day each week, refrain from mentioning the president’s name, or quoting him. Short of declaring war, anything the president does, tweets, or says likely will not have an immediate impact. The news can keep for 24 hours.

And yes, we understand the irony that the very act of denying the president his 24/7 platform risks stirring up more attention on him in the short run. But it would at least bring a temporary respite to a weary public.

Publishers and broadcasters may be reluctant to follow this advice, but if one news outlet adopts this approach, and gains readers and viewers, it might inspire others to follow. If something isn’t done, this addiction will only grow. No one wants to consider the consequences of that.