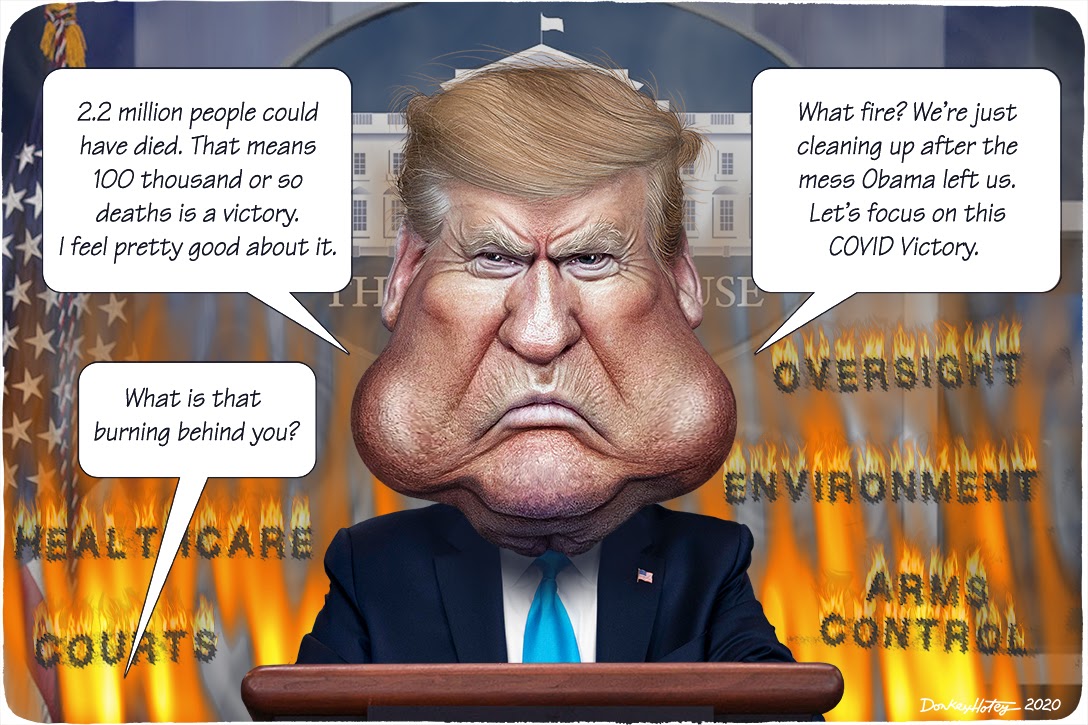 No one can accuse Donald Trump and his Republican lackeys of letting a good crisis go to waste.

While the world is transfixed by COVID-19, they are busy advancing an agenda that puts the public at risk and flies in the face of popular opinion, but is easy to overlook when everyone is so distracted.

Trump has been a house fire since he announced — oh, was it 600 years ago? — that he would run for president, ever since then throwing up a daily barrage of distraction and misdirection that is to the media what a laser pointer is to a house cat. The pandemic simply adds more cover, which is why it’s important not to lose sight of what the administration is doing.

THE ENVIRONMENT: In March, the Environmental Protection Agency replaced the Obama administration’s most important climate policy, a rule that aimed to increase fuel efficiency for cars to 54.5 miles per gallon by 2026; the Trump rules slash that to around 40mpg.

It’s no mystery who benefits here: the fossil-fuel industry. By one estimate, the weaker standards will force owners of a typical 2025 vehicle to fill up the tank 62 times more over the life of the vehicle than under the Obama standards.

Anyone who doubts the impact of urban vehicle traffic on air quality merely has to look at how clear the skies have become thanks to the widespread lockdowns everywhere from India to Los Angeles.

Weakening fuel-efficiency rules is only one way in which the administration is assaulting environmental progress. It is also relaxing regulation of toxic emissions from coal plants, and limiting the scope of impact reviews involving projects like pipelines. In all, Trump’s EPA has reversed, or is moving to reverse, 94 rules that it says are unnecessary or overly burdensome to heavy polluters (the usual industry spin).

HEALTHCARE: Trump has just reaffirmed his determination to abolish the Affordable Care Act, better known as Obamacare, for reasons that he has never clearly enunciated, assuming he even understands the law. The administration backs a legal challenge to the law that the Supreme Court has agreed to hear. It asserts that since a key part of it has been repealed — by the same folks who back the suit — the whole law has to go.

But even as Trumpists work to abolish the law they promise to retain its most popular features, like the requirement to cover preexisting conditions. If they plan to preserve its most critical reforms, then why abolish it at all, especially in the middle of a public health crisis that could go on for months? And where is their proposal for a replacement? Would they hold such animus toward the law if it weren’t attached to the name Obama? If that’s the problem, maybe there’s a quick fix here: Just change the name of the law to MAGA-care. Win-win.

Meanwhile, Trump is backing a Chamber of Commerce push to grant employers immunity from lawsuits by employees who contract the coronavirus on the job.

SWAMP OVERSIGHT:  Trump campaigned on a promise to “drain the swamp” of cozy relations between corporate rent-seekers and Beltway insiders. That commitment went out the window the minute he started appointing Wall Street alumni to key administration posts, as if the Trump family’s own conflicts of interest weren’t alarming enough.

Now comes strong evidence from a recently fired federal health official that the administration pressured him to steer millions of dollars in federal contracts to clients of a well-connected consultant, among them a drug company whose CEO is friends with White House adviser and career sinecurist Jared Kushner. The fired official, Rick Bright, says his superiors pushed him out in retaliation for his efforts “to prioritize science and safety over political expediency” by expressing doubts about administration calls for the use of hydroxychloroquine in treating COVID-19.

There are other examples of the administration’s corporate favoritism, from antitrust decisions that seem to favor pro-Trump media over anti-Trump media, to the apparently successful sabotage of Amazon’s bid for a major defense contract because CEO Jeff Bezos somehow ended up on the wrong side of Donald Trump.

COVID-19 opens up vast new lands where cronyism might thrive. Shortly after signing a $2 trillion economic rescue package in March, Trump said he would not comply with the statute’s congressional reporting requirements, then fired the incoming head of the panel that is to oversee the disposal of coronavirus-related funds. He has since nominated Brian Miller, a White House aide who has stymied efforts to investigate the president, to oversee a $500 billion rescue program for businesses that some Democrats call a “slush fund.”

Among those applying for assistance meant for small businesses are hedge funds, which meet the technical definition of “small.”

ARMS CONTROL: The administration is moving to withdraw the US from the Open Skies Treaty, a key element in multilateral arms control. In force since 2002, the treaty permits each of its 35 party states to conduct unarmed observation flights over the others’ territory to collect data on military forces and activities, a process meant to build mutual confidence about the intentions of potential adversaries. The US says Russia is violating the treaty by putting some regions off limits. But if the US withdraws, so might Russia, which last year followed the US in abandoning the 1987 Intermediate-Range Nuclear Forces Treaty. Lawmakers and analysts can debate the merits of remaining in the treaty, but with a global pandemic under way, the question is flying under the radar of public opinion, so to speak.

JUDICIAL FRONT-LOADING: In a move with implications for healthcare, tribal favoritism and the steady rightward drift of the federal courts, Trump has nominated Judge Justin Walker of Kentucky to serve on the powerful DC circuit court of appeals. Walker is a 37-year-old protégé of Mitch McConnell (R-KY) whom the American Bar Association deemed “not qualified” when Trump nominated him last year for the federal bench in Kentucky. The Senate confirmed him with a 50–41 party-line vote.

Walker’s critics note that he has more conservative pedigree than courtroom experience. He is a member of the originalist Federalist Society who once clerked for then-circuit court Judge Brett Kavanaugh and has called the Supreme Court’s 2012 opinion upholding the Affordable Care Act “indefensible” and “catastrophic.” The Senate is all but certain to confirm Walker, advancing what some see as a quiet revolution that is pulling the federal courts ever rightward, with potentially huge implications for voter rights, healthcare, gerrymandering, and much else currently obscured by the fog of COVID-19.

It would not be unfair to call much of what is happening here a kind of partisan coup, because it defies popular will on a number of issues. The public generally favors Obamacare and rigorous environmental protections. But the average voter is always at a disadvantage in policy disputes that require grasping complex ideas and challenging large vested interests that tend to have well-financed thumbs on every scale. Add a life-threatening virus and a Great Depression-like economic crisis, and public policy becomes even easier to hijack.

COVID-19 has created the perfect storm for obscuring Trump’s agenda. While storms blow over, they can leave lots of damage behind.

The cartoon above was created by DonkeyHotey for WhoWhatWhy from these images: Donald Trump caricature (DonkeyHotey / Flickr – CC BY 2.0).