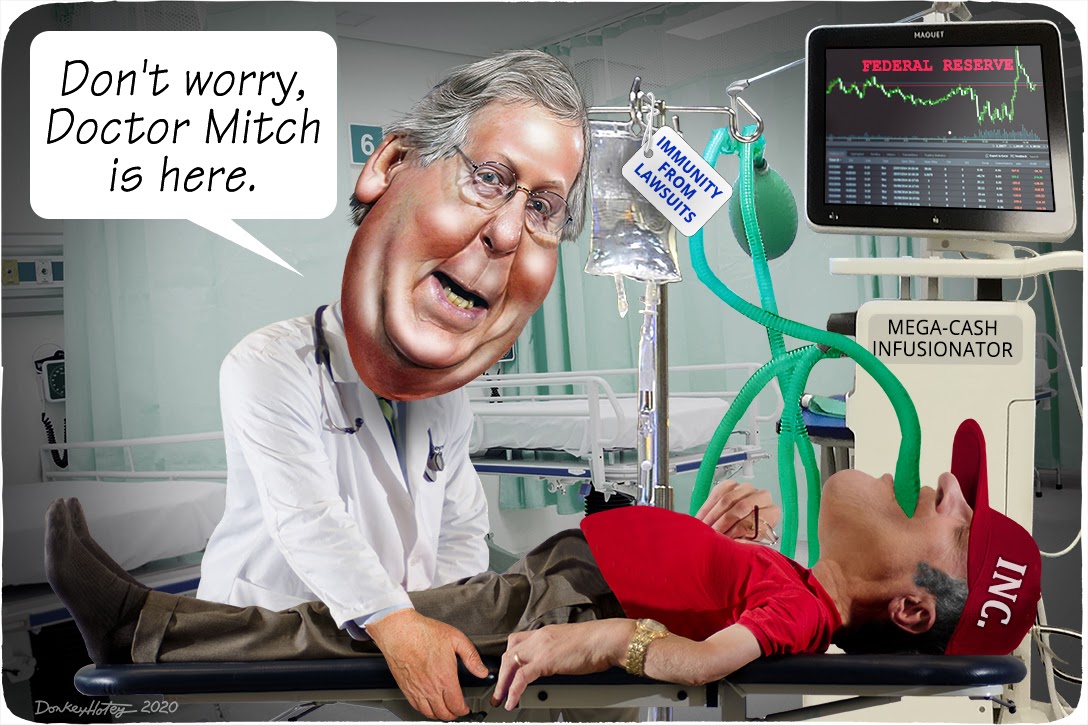 McConnell Is Pushing One COVID-19 ‘Cure’ America Does Not Need

Living in Trump-world, one often feels like Alice in Wonderland: up is down and down is up.

No issue illustrates that state of affairs more vividly than the current push by corporate special interests for immunity from consumer and worker lawsuits related to coronavirus.

Senate Majority Leader Mitch McConnell (R-KY), who usually has all the emotional range of an Alexa device, is downright passionate about this. He predicts an “avalanche of lawsuits” that will cripple businesses just as they heroically struggle to reopen during the pandemic. He warns that “the trial lawyers are sharpening their pencils to come after health care providers and businesses, arguing that somehow the decision they made with regard to reopening adversely affected the health of someone else.”

He insists that passage of this immunity proposal is a “red line” he will not cross, holding hostage another tranche of crucial federal aid to cities, states, and healthcare providers until he gets his way.

President Donald Trump is right there with him, welcoming the lobbying of the US Chamber of Commerce, National Association of Manufacturers (NAM), and big companies like Restaurant Brands International. This fat-cat alliance is afraid of trial lawyers tearing down the still foundering economy — as greedy workers and customers gobble away all the money.

What McConnell and his allies are asking for is essentially a moratorium on all lawsuits, except in those cases where an employer is practically a Bond villain. To date, McConnell hasn’t offered a specific proposal. But business lobbyists want as much liability protection as they can get.

For example, NAM asked Congress to restrict the right to sue only to those cases where the company knew that “the person would be exposed to COVID-19 and acted with reckless indifference or conscious disregard as to whether the person would contract it.”

So, what about an employer who merely puts profits above health protections? As Georgetown University law professor David Vladeck has observed, even if a business’s conduct is merely irresponsible, its actions “spread the virus just as easily as reckless acts.”

The scaremongering of the NAM et al. is not supported by the facts:

To the contrary, businesses are not under siege as the country reopens. Workers and consumers are.

Workers ought to have the right to sue — particularly if a business refuses to pay a worker’s comp claim by asserting that the worker can’t prove he or she caught coronavirus in the workplace. They also should have the right to go to court when employers put profits above safety precautions.

Before McConnell and his Republican allies try to take away the only power workers have, they should consider these inconvenient truths:

There are currently no enforceable federal safety standards for workers during the pandemic and virtually no oversight of workplaces. At best, federal agencies have delivered mild-mannered suggestions to employers.

The Centers for Disease Control and Prevention (CDC) released workplace guidelines on May 14 merely telling employers that they may practice social distancing and urging workers to wear face masks but setting out virtually no mandatory requirements. The Trump White House reportedly had suppressed the detailed advice the CDC first devised, believing it too prescriptive.

Likewise, the Occupational Safety and Health Administration (OSHA), working with the US Department of Agriculture (USDA), recently issued guidance for meatpacking plants, but that document too is packed with wiggle words like “if possible” and “if feasible.”

In April, OSHA waived an existing mandate that most employers even report the number of its workers who come down with coronavirus, making it impossible for the agency to track down workplaces where the infection is spreading. (The agency partly restored that requirement on May 19, but not by much. A workplace coronavirus infection must be reported only if an employer determines that the infection likely was caused by exposure in the workplace.)

Meanwhile, as federal agencies go limp, and businesses ask to be relieved of liability, the people on the front lines are getting sick and dying. In early April, working from partial data, the CDC estimated that far more than 9,200 healthcare workers have contracted the virus, and at least 27 have died. On May 11, National Nurses United identified more than 100 nurses who have succumbed to the illness.

But illness and death are occurring in far more workplaces. According to the United Food and Commercial Workers, 68 grocery workers have died, and more than 10,000 have been exposed or infected. As of April 20, twenty workers had died in 115 meatpacking plants, and nearly 5,000 workers had been infected. Those figures will only increase now that meatpacking plants are under Trump’s demands to continue and possibly increase production.

Worker whistleblowers have faced retaliation. Amazon reportedly fired four whistleblowers after they complained about workplace safety. Scores of doctors and nurses who voiced fears about their own safety have been suspended or dismissed.

Worker attempts to get the courts to step in also have been rebuffed. In Missouri, after eight employees developed symptoms of the coronavirus, workers at a Smithfield Foods pork processing plant were so worried about safety lapses that they went to court, asking a federal judge to issue an injunction closing the plant until it abided by CDC and OSHA guidelines.

The judge dismissed their suit, ruling that it was up to OSHA, not the courts, to determine whether the plant was safe.

Still, the litigation had some value to workers, said Rebecca Dixon, executive director of the National Employment Law Project. Last week, she told the Senate Judiciary Committee that “the mere fact that it was brought has resulted in Smithfield taking many actions to better protect its workers.”

The plant is now requiring supervisors to make sure that employees wear masks, has strengthened plexiglass barriers on the slaughter line, and has even slowed the line down to allow for social distancing. Smithfield no longer denies bonuses to workers who take sick leave, Dixon said.

The results these workers achieved make clear that the threat of a lawsuit may be the only way workplaces become safer.

In a different time, Americans who do not work in restaurants or meatpacking plants or at hospitals might have felt that struggles over worker safety don’t affect them. Those times are gone.

If millions of workers get sick, the contagion won’t remain inside their workplace. It will spread. More Americans will get sick, and more will die, and the economic recovery that the US needs will be stymied.

As it turns out, when it comes to coronavirus, no one is immune. And no one — not Congress, not the president, not big business — should be immune from their responsibility to contain it.