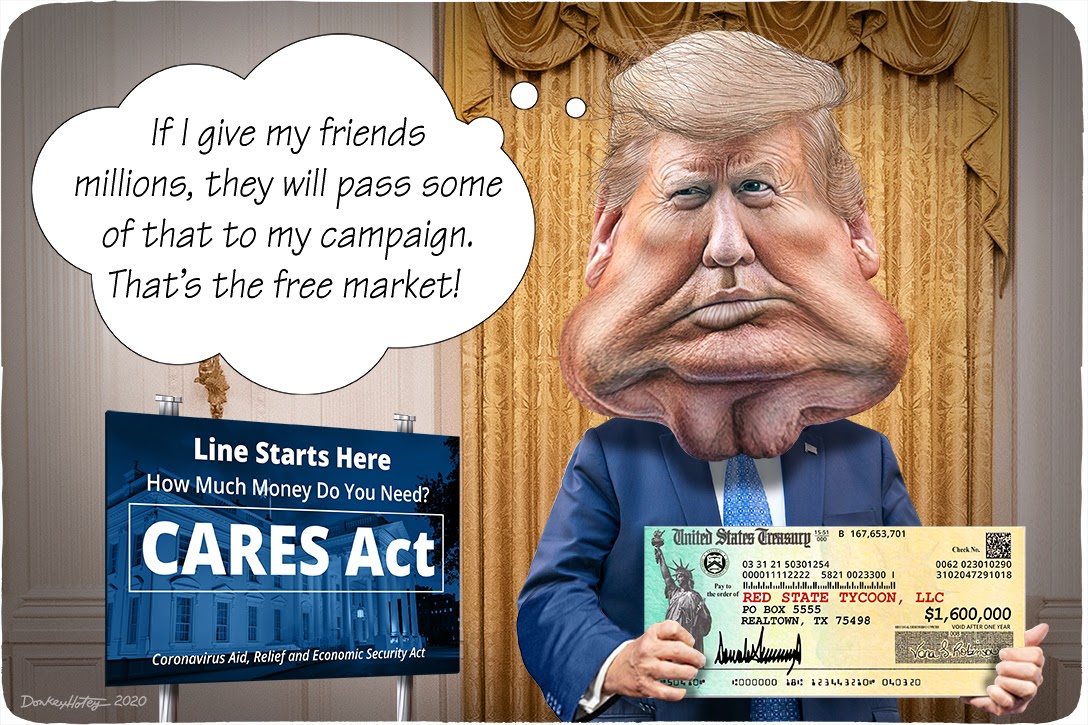 The Coronavirus Aid, Relief, and Economic Security Act (CARES), which Congress passed in March, is supposed to help primarily small businesses and newly jobless individuals. That’s partly to alleviate personal hardship in a crisis that’s no one’s fault, but also to avert a complete collapse of aggregate spending, which is more or less all “the economy” really is. CARES focuses on small companies because they employ about half of the private-sector workforce, and on individuals because consumer spending accounts for two-thirds of economic activity.

So let’s thank Congress for remembering the millionaires.

According to Americans for Tax Fairness (ATF), the CARES Act allows owners of noncorporate businesses (entities like partnerships) to turn losses into tax savings and refunds whose value could total $135 billion over 10 years. So while ordinary working folks get a $1,200 “recovery rebate” check (plus $500 per child), some 43,000 business owners making more than $1 million a year will receive a tax cut worth an average of $1.6 million this year, ATF says.

This “millionaires giveaway,” as ATF calls it, will send almost 95 percent of CARES tax breaks to business owners making more than $200,000 a year. That $135 billion equals about three times what CARES devotes to safety-net programs like food and housing aid, about a third more than is being spent on hospitals and other health services, and almost as much as what is going to strapped state governments.

Among those who have had their hands out are folks who don’t exactly sound like they’re living on the edge: hedge funds, private-equity funds, real estate investors, and large publicly traded companies. The real estate moguls who could benefit are President Trump and son-in-law Jared Kushner, who thanks to the law may claim losses on properties that have actually gained in value.

Hedge funds, for those unfamiliar with the species, are vehicles for risky speculation. What they risk is mostly other people’s money, but if they succeed management walks away with a one-time exit fee equal to 15–20 percent of cumulative gains. If they fail, management will still have reaped annual fees equal to 2 percent of fund assets. The largest hedge funds manage more than $100 billion.

Tax breaks are of particular value to another industry eager to board the CARES gravy train: private equity partnerships that own unlisted companies typically acquired just to restructure and quickly sell. The technique requires borrowing lots of money, so the more interest they can deduct the better their return, an opportunity the CARES Act enlarges. Globally, private equity funds today manage $4.1 trillion in assets and sit on $1.5 trillion in cash, both records.

All of these businesses already enjoy what many regard as overly lenient tax rules. Hedge funds and private equity firms, for example, enjoy the benefits of “carried interest,” meaning the treatment of management’s profits as capital gains, which are taxed at lower rates than normal income. Problem is, the gains are mostly on other people’s capital, not the manager’s. The usual defense of this practice entails a familiar sleight-of-hand, making plutocratic self-interest sound like a populist cause.

Business history is replete with examples of people who vilify government one minute and line up for government handouts the next, often because of a crisis that the victims themselves create (think S&L bailout or the Troubled Asset Relief Program, aka TARP). It’s at that point that what’s good for the corporation suddenly becomes What’s In The National Interest.

Among other wealthy interests claiming COVID-19 victimhood, we find the Hertz rental car company, which at one point was considering bailout money and which filed for bankruptcy protection last month, hit by a decline in business that makes it hard to service its debt. But Hertz is not just a victim of COVID-19; it’s a victim of its own poor decisions, like buying more compact cars than drivers wanted and paying too much to acquire Dollar Thrifty in 2012. Hertz competitors Avis and Enterprise, less indebted and more diversified, are getting by without concessions. (By loading up Hertz with debt, private equity had a role here, as it did with the lethal nursing home scandal.)

Then there are the airlines, recipients of $50 billion even after having spent $5.4 trillion over the past decade buying back their own shares instead of building up a cushion against economic shock, or maybe tempering the race-to-the-bottom in service quality they’ve waged for 40 years.

Some CARES beneficiaries, like Shake Shack and AutoNation, have returned their loans, though why they secured them in the first place remains a troubling question.

What’s striking here is not that business interests are so nakedly opportunistic — that’s an old story — but rather how readily they flush their individualist, anti-government principles down the commode the minute they’re no longer convenient.

If you’ve been paying attention since about 1980, you’re doubtless familiar with that most sacred tenet of American capitalism, that private corporations operate optimally only when freed from the oppressive hand of government to maximize profit, reward shareholders, and heroically advance the general welfare. The best thing government can do, therefore, is — wait for it — “get out of the way” of business.

Until, of course, business needs a government lifeline. History is replete with examples of people who vilify government one minute and line up for government handouts the next, often because of a crisis that the victims themselves create (think S&L bailout or the Troubled Asset Relief Program, aka TARP). It’s at that point that what’s good for the corporation suddenly becomes What’s In The National Interest.

An early exemplar was Citibank (then First National City Bank) CEO and anti-government warrior Walter Wriston, whose zeal for dismantling financial regulation was something of a “personal crusade,” according to Jeff Madrick’s Age of Greed, a 2011 history of neoliberal deregulations since the early 1970s. Wriston may have despised government, but when a major Citibank borrower, the Penn Central railroad, filed for record-setting bankruptcy in 1970, he changed hues like a stressed chameleon.

“Effortlessly shedding the mantle of Adam Smith for the role of senior corporate statesman, Wriston speciously argued for government money on the grounds of national security,” according to one account. “What he meant was Citi’s security.”

Wall Street cheered when Ronald Reagan declared that government is not the solution, but the problem. Turns out, it’s also Wall Street’s safety net.

So much for getting government out of the way. Citi’s rescue was the one of many that preceded TARP, a bailout for malfeasant bankers who had long insisted they could regulate themselves and chafed at the idea of guardrails and stoplights. This led straight to the unpleasantness of 2008-09, and to a remarkable admission by laissez-faire totem Alan Greenspan that there was a “flaw” in his free-market ideology.

There’s a flaw all right, but it’s one people tend to remember only when it’s too late. As soon as this crisis passes, the flaw will be tossed down the memory hole along with CARES, TARP, and other corporate bailouts. That will allow Wall Street to bray again about Herculean job creators battling tyrannical government, always the rhetorical weapon of choice when you’re trying to beat back regulation or secure a juicy tax cut.

If taxpayers are going to backstop big business, you might think they’d get something for their money, like equity stakes or a decent return on government loans. European governments have done just this. Indeed, the people who should be demanding stakes are conservatives who used to speak reverently of an “ownership society” that values personal responsibility for personal failures.

But as University at Buffalo finance professor Veljko Fotak notes, despite early talk of equity stakes in return for CARES aid, the US government appears to have received little beyond warrants that entitle it to stakes in several airlines. It’s not clear if the government has actually exercised these warrants, thanks to the opacity surrounding implementation of CARES.

Senators Elizabeth Warren (D-MA), Sheldon Whitehouse (D-RI), and others are trying to repeal the parts of CARES they regard as unjustifiable. But for now, says Fotak, the bailouts “constitute a massive wealth transfer from taxpayers (current and future) to firms — with a truly obscene portion of this wealth transfer benefitting large and [publicly traded] firms. In other words, here we have US taxpayers financing Trump’s re-election campaign.”

So next time you hear Chamber of Commerce Republicans crow about bootstrapping their way upward in a dog-eat-dog marketplace, try and remember the corporate hypocrisy revealed yet again by COVID-19.

Wall Street cheered when Ronald Reagan declared that government is not the solution, but the problem. Turns out, it’s also Wall Street’s safety net.