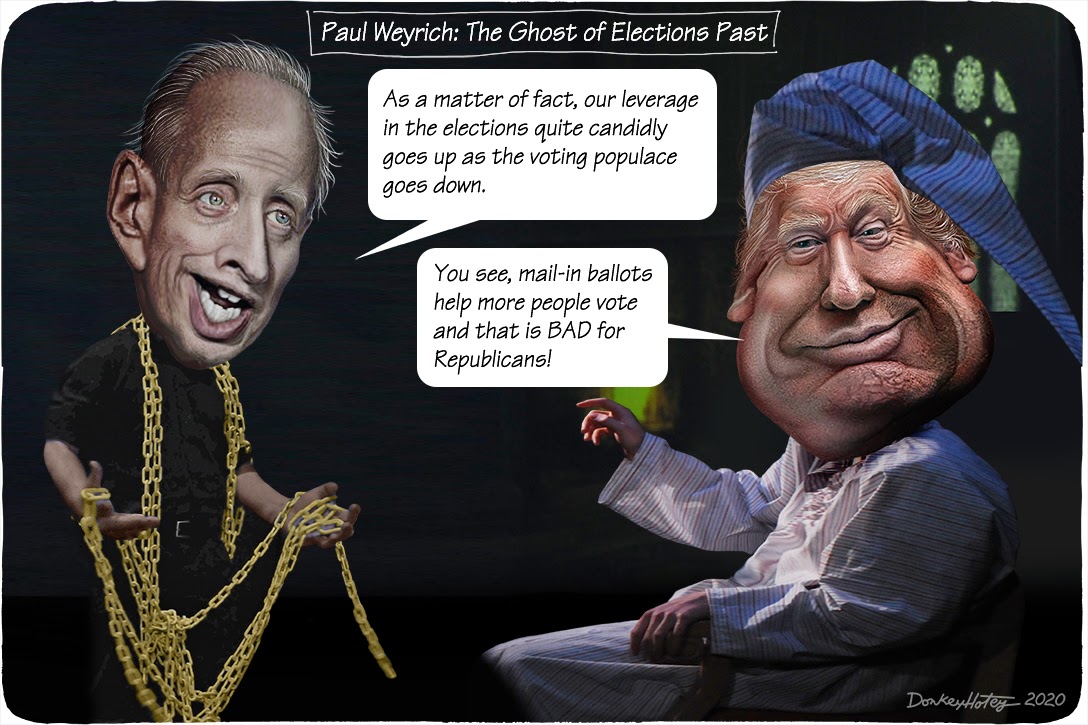 Mail-in Voting Is a Must This November

The coronavirus is not political. It does not hate Americans because of our beliefs. It does not wish to curb our freedoms due to ideological differences. It does not discriminate when it fells its victims.

In the United States, citizens have the right to life, liberty, and the pursuit of happiness, and they also have the right to vote as provided by each state. At this point, the only way to safely ensure all those rights at the same time is to allow all citizens the option to vote by mail.

COVID-19 is not a Democrat. It is not a Republican. It does not care if we vote in person or by mail. It has no vested interest in our political discourse. The worldwide pandemic is not something liberal activists orchestrated. It is just our reality. And whether or not it would be a reality for the US if our government had handled the crisis differently makes no difference now. What matters now is how we must act and how we can stay safe.

Voting by mail is simply the safest way to vote. It is not a political issue so much as it is a public health issue. In addition, as has been reported time and time again, voting by mail is secure and has a storied history here in the US. It is a common practice that has not been controversial before now.

Not only is vote-by-mail not partisan in results, it is not partisan in concept. It is supported by both Republicans and Democrats in the polls. According to the Pew Research Center, 70 percent of all Americans believe we should have vote-by-mail access. Nearly 50 percent of all Republicans questioned approve of mail-in ballots, and that number shoots to 70 when the Republicans questioned were from states that already offer the ballots. Its expansion, which has been in the works well before this year, has been facilitated by legislators in both red and blue states — 24 of the 46 states offering the option have Democrat governors, and 22 of them have Republican governors.

Why does the president believe that people having access to the polls means that he’ll lose the election? All of the evidence points to a fair fight, with or without mail-in options. Could he be worried about high voter turnout, instead of fraud?

It’s also not new. The concept of absentee voting dates back to the Civil War, when the Union allowed its soldiers to cast ballots from wherever they were deployed. In the 1980s, California introduced no-excuse vote-by-mail, meaning its residents could request an absentee ballot for any reason or no reason at all, and their vote would be counted. By the 2018 midterm elections, 27 states had followed suit. More than half the United States already had a complete vote-by-mail option before COVID-19.

And as vote-by-mail has become more popular, more people have been taking the option — again, pre-COVID-19. Nearly 25 percent of all votes tallied in 2018 were via mail-in ballot. That’s double the rate from the 2000 election.

Which is why it makes no sense that President Trump continues to rail against mail-in ballots.

Without evidence, the president has stated that the 2020 election “will be the most corrupt election in the history of this country,” and he placed most of the blame for this unsubstantiated claim on conspiracy theories about mail-in voting.

“There is tremendous evidence of fraud whenever you have mail-in ballots,” Trump said in Arizona.

But, quite simply, there is not.

With more than 250 million ballots cast by mail over the past 20 years, there have been only 143 criminal convictions for election fraud, according to the Heritage Foundation, which keeps an online database of election fraud cases in the US. That is a fraud rate of .00006 percent. That is no fraud.

States have many means to guard against fraud, as well: Signature match requirements, official mail-in drop-offs, voter identification measures on both the ballot and the envelope used to return the ballot, and required mail stream between election offices and residents throughout the years to keep the rolls clean and active.

Meanwhile, on Twitter and at campaign events, Trump rants about voting by mail, citing forged ballots, corrupt mail carriers, stolen ballots, and more. According to the New York Times, Trump has made five dozen false claims about mail-in voting since April. He’s even suing Pennsylvania over their possible voting expansion.

Why does the president believe that people having access to the polls means that he’ll lose the election? All of the evidence points to a fair fight, with or without mail-in options. Could he be worried about high voter turnout instead of fraud? Is preserving voter suppression a good enough reason to push millions of voters into packed polling places during a time when we’re all meant to be quarantined for fear of contracting a respiratory virus that has killed nearly 130,000 people in the US alone and infected nearly 3 million Americans?

Trump has admitted as much, in wayward comments. In March, he told Fox & Friends that the more access people have to voting, the less likely Republican candidates will be voted in. He was referring to the money Democrats had set aside for election integrity in the wake of this virus, including an expansion of mail-in options nationwide.

“The things they had in there were crazy,” Trump said. “They had things — levels of voting that, if you ever agreed to it, you’d never have a Republican elected in this country again.”

And while the president calls voting-by-mail corrupt, horrible, and rigged, he himself votes by mail — as recently as in the Florida primary.

Regardless of what the president is saying and doing, the reality is that vote-by-mail is coming. State and county officials have been steadily and quietly working to expand these measures since early this year, in response to the coronavirus. Experts are saying as many as 70 percent of all ballots cast in the general election will be mailed in. This is the appropriate response.

Studies show that with or without a pandemic, “universal vote-by-mail has no impact on partisan turnout or vote share,” which means there is no reason to require people to stand in line for hours on election day in masks to cast their votes.

No one need choose their right to civic engagement over their health, because voting by mail is not politically charged. It is simply safe.