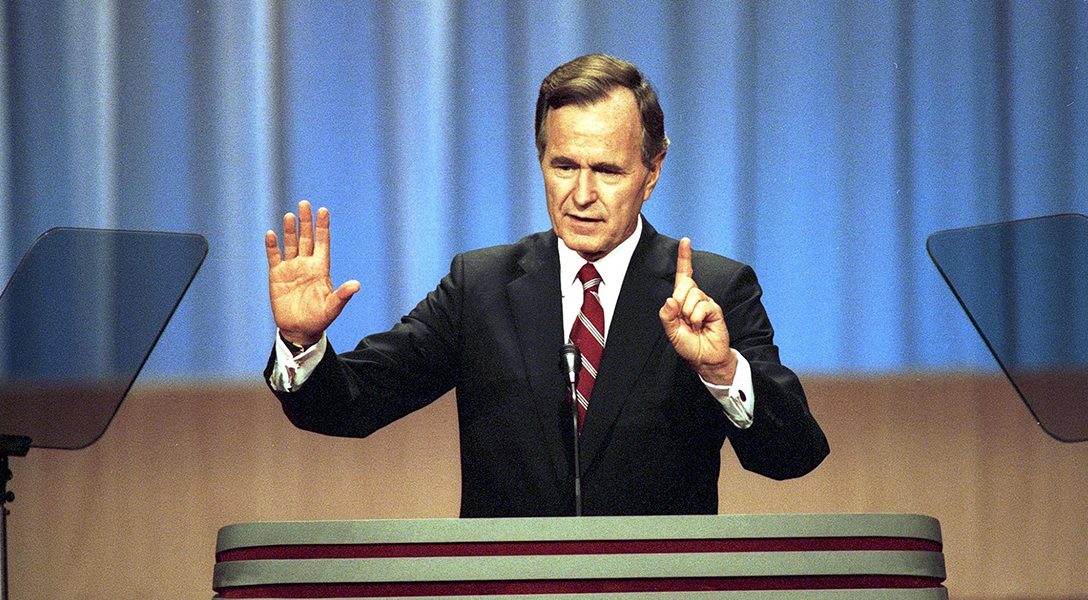 Yeah, I know, speak no ill of the dead, and all that. So, as the nation mourns the loss of former president, George H.W. Bush, this week, I take up my pen with some degree of trepidation.

We will hear a lot about what a decent man Bush was, and that’s true. He was a nice guy, a good family man, a war hero and, I say with no small degree of nostalgia, not crazy. (Yet, in light of the horror show of a president now in our White House, even Richard Nixon looks less evil.)

But GHWB marked a turning point for his party and the nation. I say that because I was there when it happened, and I have never forgotten it.

It was 1992, the Republican nominating convention in Houston, Texas. I was covering it for two publications, a business paper in New York, and Mother Jones magazine in San Francisco.

Here was a convention like none of us reporters were prepared for. It began the moment we entered the convention center. At the door were folks handing out large buttons that read, “The Press Lies.” Nearly all the delegates sported at least one. Of course we members of the press were easy to spot due to the large press credentials we had to wear around our necks.

As we made our way across a crowded convention floor we were herded into a raised press area that overlooked the whole convention center. That was the first time I noticed a hundred or so youngsters, teenaged to maybe early 20s, all dressed up as though they had just left the set of Music Man and were about to break into a rendition of “There’s trouble… there’s trouble in River City.”

It wasn’t long after we were all seated in the press area that these squeaky-clean kids gathered in formation on the floor below us and began chanting, “Be fair. Be fair. Be fair,” much to the delight of the delegates around them.

What followed were three days I will never forget. Pat Buchanan launched into his now infamous “Culture War” diatribe, declaring that the war was for “the soul of America” with Bush “on our side.” (Which Molly Ivins quipped later “was much better in the original German.”)

Reporters had to make a reservation to get down on the floor to do our jobs. We were each given strict, and tiny, time limits on the floor. On one such short trip down I ran into then-Rep. Jim Leach, R-Iowa. I’d known him since he asked me to come to his office and sign a book on the S&L scandal (Inside Job: The Looting of America’s Savings and Loans) that I’d co-authored. Unlike others in his party, Leach had embraced the book’s message calling for stricter banking regulations.

But he was not sitting with the Iowa delegation, but rather standing in the aisle beside it. “What are you doing out here?” I asked him. “They won’t allow me to sit with our delegation,” he responded. I asked why. “They think I’m not conservative enough,” he said, shaking his head in disbelief.

Leach was one of the most decent and honest members of Congress I had ever dealt with. He was truly a nice guy, a smart guy. But the Iowa delegation had no time for any of that. Not in 1992. The purge of moderates in the GOP had begun in earnest.

As I watched from my perch in the press area, I glimpsed some action on the other side of the arena. Important people were about to take their seats. And down the steps they came, arm-in-arm, Barbara Bush and Rush Limbaugh, making a staged grand entrance to the delight of the delegates below. It was an entrance laden with message and meaning, an endorsement from the nominee-to-be that he embraced Limbaugh, who was just emerging as a major conservative voice.

Then Dan Quayle’s wife, Marilyn Tucker Quayle, took the podium to deliver her version of a call for Republican “family values,” which included a strident plea that wives should not seek careers outside the home. This from a woman who did just that herself. I was sitting next to a young woman reporter from the Scotsman newspaper. At this point she’d had quite enough of all this. She gathered her papers, mumbled loudly, “Give me a fucking break,” and left.

As I said, this was no ordinary convention.

After each day’s speeches, the Democrats hosted a “Truth Squad” briefing a block away at a local pizza joint. Ron Brown and Betsy Wright were there to counter the GOP message and answer reporters’ questions. The place had floor-to-ceiling windows facing the sidewalk outside. No sooner had the meeting begun than we heard pounding on the windows. Turning around, there they were, the white-shirted youngsters, in the straw hats and bow ties. They pounded on the windows chanting “Be fair, be fair.” (Images of the Hitler Youth flashed through my head).

This convention was George H.W. Bush’s convention. His nomination was assured. He clearly approved these messages. Reagan may have prepared the ground for it, but GHWB took the ball and ran with it. The party of Reagan became the party of Limbaugh and Pat Buchanan. While Bush spoke of a “kinder, gentler” form of politics, his convention was meaner and rougher. It planted the seeds that grew years later into the Tea Party, and then later still into a GOP with more in common with European-style fascists than Jeffersonian democracy.

In fact, I will go even further. It can be argued that George H.W. Bush’s nominating convention lit the fuse that, as it burned through the years since, ended with the election of Donald Trump.

So, as we hear all the eulogies this week, let’s just keep all that in mind.