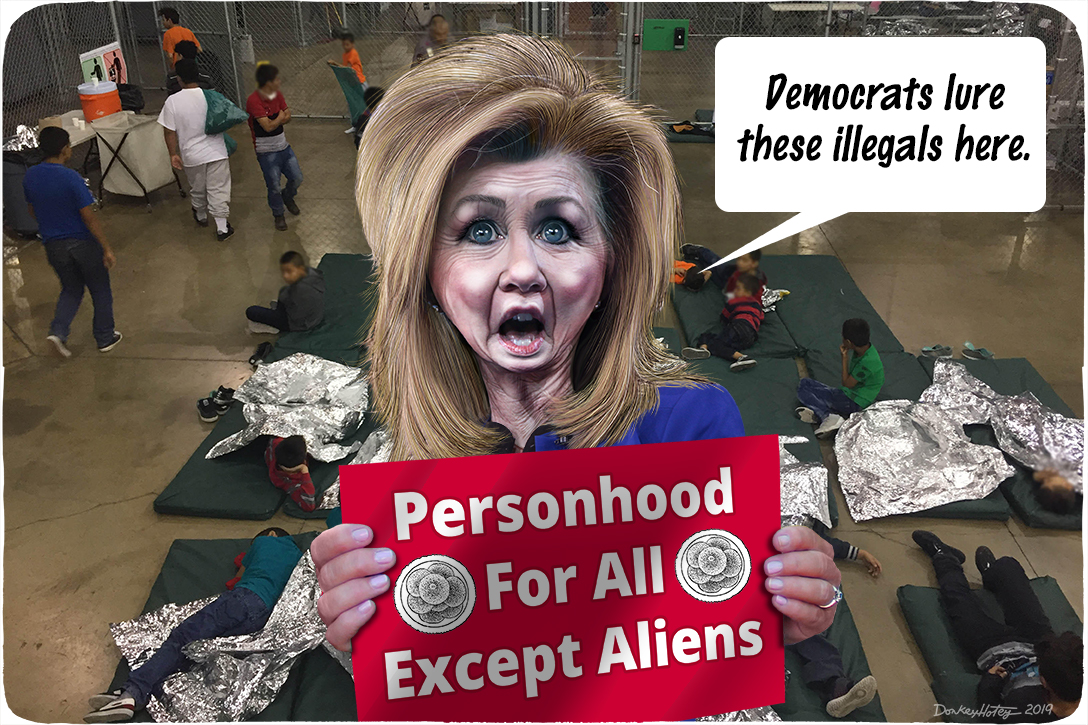 For Undocumented Migrant Children There is No ‘Right to Life’

When she was five months pregnant, Marshae Jones, a black woman living in Alabama, got in a fight with another woman. Jones was shot in the stomach. Her fetus died.

The shooter was not charged; she was acting in self-defense, a grand jury believed. But Jones was indicted for starting a fight while pregnant. The charge? Manslaughter.

A grand jury accused her of recklessly endangering her unborn child, “intentionally” causing its death.

Even in Alabama, a state that has essentially made abortion illegal, charging a pregnant gunshot victim with a crime seems mad. The grand jury assumed that Jones came up with a harebrained scheme to end a pregnancy. She would have to be sure the woman she confronted had a gun and would use it. Jones would also have to gamble that her assailant wouldn’t aim at her head.

Jefferson County, Alabama, District Attorney Lynneice Washington ultimately declined to prosecute, but only after she faced an onslaught of publicity over the whole affair.

Alabama law makes no distinction between the rights of a fetus and those of a person. Nevertheless, all this devotion to a fetus’s rights hasn’t helped the state’s dismal infant mortality rate.

According to the Centers for Disease Control and Prevention, Alabama is the state with the sixth-highest infant mortality rate in the country, actually an improvement over past years. Food insecurity, income inequality, and the lack of access to prenatal health care, particularly in black communities, seem to be contributing factors, experts say.

But it points up a political fact of life these days: Many of those who would go to extremes to protect “preborn” babies, as they like to call them, even by criminalizing the conduct of expectant mothers, may be less eager to protect babies after they actually emerge from the womb.

But it’s one thing to vote to cut federal aid to poor children, as anti-abortion conservatives often have done. It’s quite another to be complicit in government-instigated cruelty to children.

The accounts of immigration lawyers, reporters, and even border agents speaking anonymously all confirm the appalling conditions in which the US government housed undocumented children at a border detention center in Clint, Texas. (No one who has visited has been allowed to use cameras or cell phones to document conditions there.)

Last month, a Department of Justice lawyer challenged whether US authorities were required to provide each child with the bare necessities, such as a toothbrush and soap. At issue was an earlier court order mandating that children be housed in “safe and sanitary conditions.”

Previous administrations have not done much better by immigrant children, but this administration’s hateful immigration policies have made Clint, and its overcrowded conditions, ground zero for callousness.

Their plight has drawn the attention of the world. United Nations human rights officials now are condemning these abuses.

Nevertheless, the reports of children sleeping on concrete floors under bright lights without access to clean clothes, regular showers, or even enough food have not stirred up much dismay among the political leaders who are in the forefront of defending the rights of the unborn.

On the contrary, many anti-abortion stalwarts have shown little empathy for immigrant parents and their children.

Consider Jeff Sessions’s record. As a senator, Sessions (R-AL) was a reliable foe of abortion rights, receiving a 100 percent rating from the National Right to Life Committee. “There is no higher duty than protecting our nation’s children,” he once said.

But clearly the only children Sessions considers worthy of protection are American citizens.

As attorney general, Sessions was the architect of the administration’s family separation policy, directing US Attorneys to adopt a “zero tolerance” policy for anyone who allegedly entered the country illegally, making them all subject to a criminal felony charge. Once parents were arrested, the government had a pretext for seizing their children.

Rep. Steve King (R-IA) waxed poetic about a fetus depicted on a sonogram, which he displayed at a Congressional hearing. “It’s time to emancipate every little unborn baby,” he proclaimed.

King pushed legislation that would ban abortion after six weeks, in some cases before a woman even knows she’s pregnant.

But King did not extend “emancipation” to immigrant children. Asked about the recent reports of maltreatment of children at border detention centers, he claimed that detention centers, which he last visited five years ago, provide children with “better care than they can get in their home country.”

When she served in the House, Marsha Blackburn (R-TN) went crazy over what were later found to be misleading “investigative” tapes that seemed to show that Planned Parenthood was profiting from the sale of fetal tissue to researchers. Blackburn held hearings to address the scandal of what she termed “selling baby body parts.”

Perhaps it is not surprising that Blackburn, who stirred up so many emotions in her “baby body parts” hearing, would use similar tactics when running for the Senate.

During her race to fill an open seat following the retirement of Sen. Bob Corker (R-TN), Blackburn aligned herself with Trump’s harsh immigration policies. What she termed “loose” laws “make every state a border state,” she warned. “People want to make certain that we secure our border and end sanctuary city policies.”

She made immigration a big factor in her attack ads, which falsely accused her Democratic opponent of luring illegal immigrants to Tennessee.

Last month, Blackburn traveled to a processing center in El Paso, Texas, where she apparently talked only to border patrol agents. She was more focused on drug smugglers and human traffickers, even though immigration lawyers say that unaccompanied children usually travel to the US to be reunited with family members living in this country.

She is the sponsor of Republican legislation that would protect children from falling into the custody of “traffickers,” while offering no protections for children cared for in US detention centers, or making it easier for them to be reunited with their relatives.

An immigration attorney, who has spoken to many children at the infamous Clint detention center, said she found no child was lured into the US by traffickers, and that border officials had no reason to separate children from the adults who accompanied them.

“Every child who we interviewed had crossed the border with an adult family member, whether it was a parent or an older sibling or an aunt or a grandmother. Every one of those family units was torn apart by the government,” attorney Elora Mukherjee told the Atlantic.

“Everyone who we interviewed, and I anticipate nearly every child who was detained at Clint, has family members in the United States who are desperate to be reunited with their beloved children. Parents who are desperate to get their children back and parents who have no idea how to get their children out of there and the children have no comprehension, no understanding of how they might be able to get out. They don’t understand the process to get out.”

Yet Pence seems untroubled by what his own administration is doing. Confronted by a description of conditions at the Clint center, Pence blamed Democrats for not approving more money for the border crisis and not doing enough to toughen anti-trafficking laws.

Pressed about whether he approved of this despicable treatment of children “as a father … a man of faith,” Pence’s response was a callous non sequitur. “Well, no American, no American, should approve of this mass influx of people coming across our border,” Pence said. “It is overwhelming our system.”

But politicians aren’t the only ones who seem to have two hearts — one that bleeds for what they term the “preborn” and one that has much less compassion for “postborn” children.

Where were all those Right to Life marchers when children were subject to inhumane treatment at border detention centers? Why didn’t they rush to the White House to protest? Where were the sermons condemning this terrible state of affairs?

Why didn’t evangelical and Catholic anti-abortion leaders call their followers to Clint and demand to see the children?

The plight of these victims should have evoked the same moral outrage that stokes the movement that calls itself “pro-life.”

The fact that it didn’t tells you a great deal about the anti-abortion movement’s leaders and the politicians who support them. They’re not all about the children. They’re all about the women — that is, punishing any woman who aspires to control her own body and make her own family-planning decisions.

No wonder they arrested Marshae Jones.