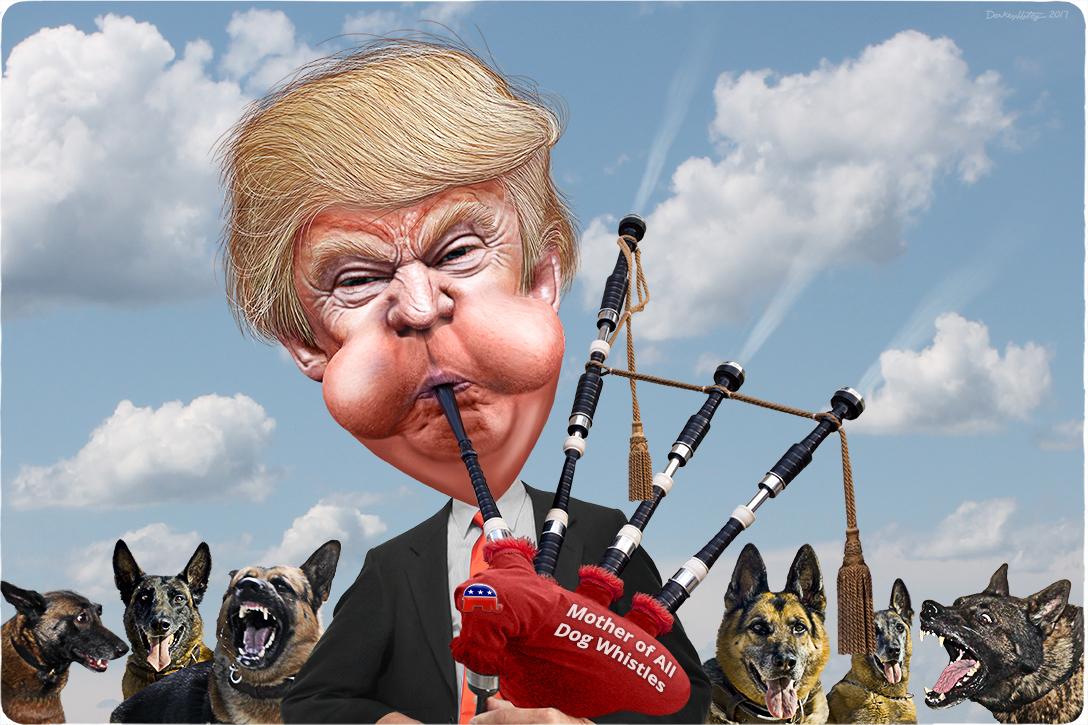 Dog-Whistler-in-Chief or a Tremendous Opportunity?

President Donald Trump recently told reporters that he is “the least anti-Semitic person that you’ve ever seen in your entire life” and added that he is also “the least racist person.” There are two possibilities: The first is that the statement is clownishly ridiculous and false. The second is that it is true, in which case, Trump’s presidency will offer a tremendous opportunity to fix race relations in the United States.

After all, it would be pretty neat to have the least anti-Semitic and least racist person in office right now. Hate crimes are on the rise and the election of the US’s first African-American (or, according to Trump, just African) president has revealed that there are still substantial racial rifts that divide the nation.

Five years ago today, for example, George Zimmerman killed Trayvon Martin and was later acquitted of a homicide charge. While only one-third (33%) of white Americans said the shooting was unjustified, 87% of blacks thought so. On the other hand, a much higher percentage (63%) of whites disapprove of a black football player not standing for the national anthem to protest racial injustice. Read those last two sentences again.

Trump clearly has his work cut out. He is also off to a bit of a slow start, even though he praised the achievements of Frederick Douglas. But not specifically mentioning the suffering of the Jews during the Holocaust didn’t help. However, when you are the least anti-Semitic and racist person, maybe you don’t think along those lines. White House spokesman Sean Spicer said that criticizing Trump for omitting a reference to the Jews is just “nitpicking.” The Anti-Defamation League saw things a bit differently but, honestly, what does the ADL know about anti-Semitism?

Maybe we should look at Trump’s record more closely instead of just taking his word for it.

There are obviously some instances in his past that could lead a reasonable person to conclude that he might not be the least racist or anti-Semitic person out there. For example in the 1970s, when the Trump Management Corporation, which he worked for, was sued by the Department of Justice for not renting to blacks. The case was settled and the Trumps had to take steps to ensure that they would be in compliance with the Fair Housing Act in the future. However, maybe Trump knew that the apartments were not that great and he wanted black families to only live in the best places. So that’s inconclusive.

A couple of decades later, one of Trump’s casinos in Atlantic City was fined $200,000 for removing black dealers from card tables when a certain high roller came to play. A former employee of another Trump casino told The New Yorker, “When Donald and Ivana came to the casinos, the bosses would order all the black people off the floor.” At first glance, that doesn’t look good but maybe Trump simply wanted black employees to have a lot of breaks. Inconclusive again.

Another casino episode, told by former Trump Plaza COO John O’Donnell, quotes the current president saying: “Black guys counting my money! I hate it. The only kind of people I want counting my money are short guys that wear yarmulkes every day.”

Admittedly, that doesn’t look great for the least racist person but it does confirm that he wants to employ Jews, so maybe it’s a wash. And he made Omarosa Manigault famous, and she is black. The legendarily litigious Trump never sued O’Donnell and he told Playboy a few years later that “the stuff O’Donnell wrote about me is probably true.” Sad!

Fast forward to the presidential campaign, where Trump made a series of statements that would appear to be at odds with his claim of being the least racist person. But Mexicans aren’t a race and neither are Muslims so that’s a bit of a gray area.

Then there is that whole “urban crime” thing Trump loves to talk about, as well as all the unproven claims of election fraud in “those” areas of big cities. He also cited incorrect homicide statistics with an anti-black bias, but that was just retweeting so that’s obviously not on him.

Taking all of these incidents together, one would almost be inclined to say that Trump was fibbing a bit when he said he is the least anti-Semitic and least racist person out there. However, the Washington Post didn’t include his statement in the long list of presidential “falsehoods,” so those guys probably believe him.

And that brings us to the next point: Trust.

While Trump, as the least racist and anti-Semitic person in the land, probably wants to solve all of the nation’s race and religion-related problems (for example with the help of the National Guard), he will have to bring all Americans together.

He already started that dialogue by asking an African-American reporter whether she knew those other black people from the Congressional Black Caucus and could maybe set up a meeting. That was good thinking even though he was criticized for it.

But these are not problems Trump and the various minorities can fix alone. At least not in most cases – because he could unilaterally reduce hate crimes against Muslims by not letting them into the country and against Hispanics by deporting them and building a big wall to keep them from coming back.

However, to fix all of the racial problems, Trump also needs to bring the white supremacists/neo-Nazis/alt-right (or whatever they are calling themselves these days) to the table.

And that’s where there is another big opportunity, because even though Trump is the least racist and least anti-Semitic person, those alt-right guys LOVE him. They really do.

They think all of the things he has been doing and saying — only a fraction of which we compiled — are secret nods and winks to them. Those idiots! They think all of those retweets, the appointment of Steve Bannon and the coded language Trump uses is evidence that he is one of them. Those fools are going to be pretty surprised when the president proves to them that he truly is the least anti-Semitic and least racist person in the country.