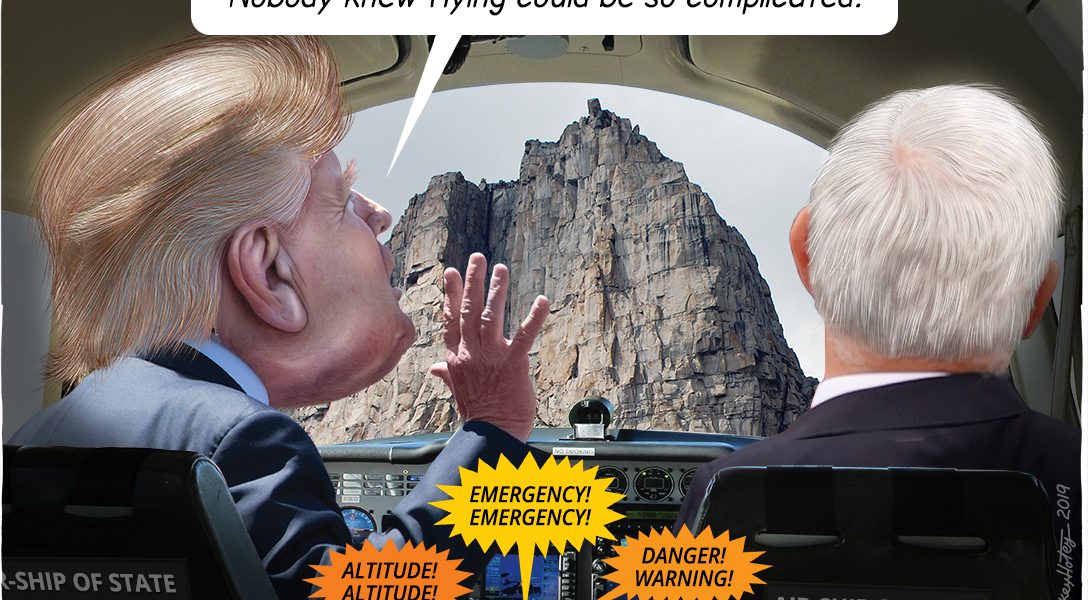 Diplomacy for Dummies: Foreign Policy Is No Place for Amateurs

Donald Trump seemed to confirm on Wednesday that the US has nuclear weapons in Turkey, something the US government has long declined to disclose. He did not do this, as far as anyone can tell, as a shrewd act of geopolitical gamesmanship, but out of verbal incontinence unconstrained by familiarity with State Department policy.

This impulsive indiscretion is of a piece with a larger pattern of uninformed pronouncements, like the newsflash that “nobody knew that healthcare could be so complicated.” Or the observation that the US is obligated to defend Japan, but “if we’re attacked, Japan doesn’t have to help us at all. They can watch it on a Sony television.” That remark, wrote Princeton professor Gary Bass, displayed “a strategic cluelessness and historical ignorance that would disqualify a person from even a modest desk job at the State Department.”

US foreign policy is increasingly hostage to a mind that is, as NPR’s Car Talk guys used to say, “unencumbered by the thought process.” That’s embarrassing, but it could also be lethal. If we’re not going to use nuclear weapons, Trump once argued, “then why are we making them?”

Set aside the delegation of Ukraine relations to liegeman Rudi Giuliani and campaign contributor Gordon Sondland, and ignore for a moment whatever caprice inspired last week’s abandonment of Syria’s Kurds. There’s already something amiss when, at any G-20 summit, the most powerful person in the world is also the most ignorant person in the room, an inversion of competence and power that you don’t tend to see in corporate boardrooms or in other organizations that wield significant public influence.

There’s a reason society requires the credentialing of people who make highly consequential decisions — lawyers through bar exams, doctors through board certifications and state licensing procedures. It’s the same reason airlines don’t put untrained pilots in the cockpit and pray that they’re quick learners; pilots pass rigorous tests of competence long before they start moving passengers. And yet the most critical job on earth has no test for measuring what other professions call “job knowledge.”

Maybe it’s time to start imposing one, and the State Department itself provides a good model: the Foreign Service Officer Test, which measures literacy in areas like trade, political economy, and history, while assessing communications skills. Any US citizen over 19 and under 60 can take it, and about 20% of registrants pass.

The first objection here is obvious: Political power in a democracy is supposed to reside ultimately in popular consent, and subjecting political candidates to credentialing would simply move the locus of power to the folks who write the tests. Governance is not supposed to be the province of an elite professional clerisy.

But if we impose what amounts to a literacy test on aspiring immigrants, how is it we impose none on the people who run the show? When it’s barely an open question whether the president could even pass the US citizenship exam, something is wrong with this picture. Yes, a competency test would restrict the pool of candidates — indeed, that would be the objective. And it would not guarantee leadership excellence; it would merely weed out the egregiously unqualified, as every other job-screening process attempts to do.

Others might wonder if a competency test would promote a partisan bias among qualified candidates. But what reason is there to think one side possesses smarter people than the other? Conservatives have their William Buckleys and George Wills. Liberals have their Patrick Moynihans and Barack Obamas. You can disagree with these people but you can’t say they’re illiterate.

Donald Trump amply proves that voters cannot always distinguish between qualified and unqualified, something the Constitution anticipates; that’s one reason there’s an Electoral College. Even if there weren’t, it would still be a fair question whether a world of nuclear weapons and border-free terrorism can afford the risks implied by the populist spasms of a single country and the clueless leadership they sometimes produce.

American culture has global consequences, and they are not always benign. Donald Trump’s rise owes partly to an anti-intellectual disposition perfectly exemplified a decade ago by creationist Don McLeroy, who as a member of the Texas State Board of Education inveighed against the tyranny of science by declaring that “somebody’s got to stand up to experts.”

Science still has a place for experts, but Mr. McLeroy can take heart: In the realm of diplomacy, Donald Trump is cleaning house.