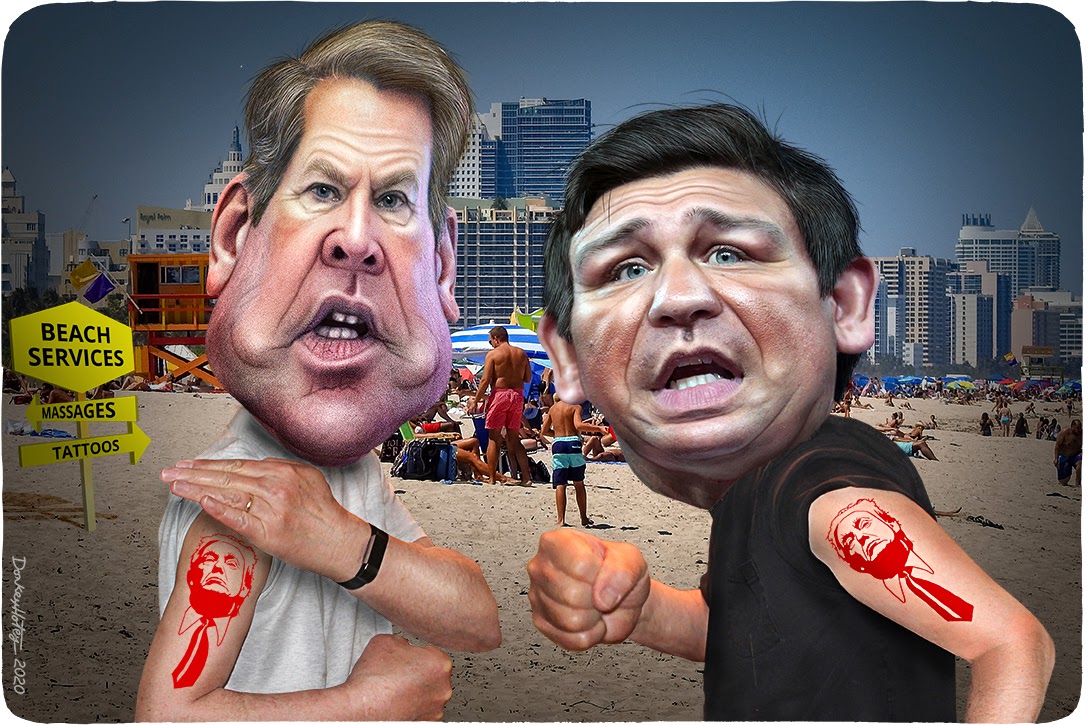 COVID-19 Casualties You Should Wish For

There’s a growing sense that the US after COVID-19 will be a far different place than it was before — just as it changed irreversibly after 9/11, the world wars, and other transformative calamities. But how different depends on whether the crisis puts a stake through the heart of certain faith-based certitudes that help explain why 4 percent of the world’s population accounts for 30 percent of diagnosed COVID-19 cases.

These include the notion that individual freedom is always the highest priority, that “experts” are villains, and that all government does is “get in the way” of infallible markets. Note that each of these is a cherished conviction of the populist right, which, if you’re in the hunt for idiot mythologies, is what military folks call a target-rich environment.

Let’s start with the notion of the marketplace as the faultless engine of all human progress. You might know this as the “invisible hand,” Adam Smith’s venerated term for the idea that the unimpeded pursuit of profit always aggregates to the public good. Though Smith himself heavily qualified this idea, laissez-faire purists treat it as an article of faith in the self-serving catechism of unfettered profit-seeking.

But it was precisely the profit motive that exacerbated a shortage of ventilators amid the pandemic that prudent people had long warned was inevitable.

Exhibit A: what happened when the Department of Health and Human Services tasked the private sector in 2010 with producing ventilators for the national stockpile through an initiative called Project Aura. According to accounts by the New York Times and ProPublica, Newport Medical Instruments, the small device maker contracted by HHS, was making progress toward the goal of mass-producing a class of cheap, portable ventilators that would cost per unit about a third of the prevailing $10,000 price.

There is a juvenile complexion to the determination of Republican Governors Ron DeSantis and Brian Kemp to reopen their states for business, damn the science.

Then the Gods of Profit stepped in. In 2012, a larger device manufacturer, Covidien, bought Newport and immediately put its ventilator project on the back burner. Government officials and industry executives told the Times that they suspected Covidien simply wanted to prevent Newport from building a product that would challenge Covidien’s. Covidien ultimately abandoned the project, even after the government topped up its funding, complaining that it was “not sufficiently profitable,” in the Times’s phrase.

Note that Covidien produced perverse social consequences not because it was evil but because it was rational, in an Adam Smith sort of way. It did exactly what free-market high priest Milton Friedman famously argued that large corporations are supposed to do: make profit-maximization its highest priority. You prefer market outcomes? The ventilator shortage is a market outcome. As the Times helpfully noted, a focus on “maximizing profits is not always consistent with the government’s goal of preparing for a future crisis.”

It’s not hard to find other ways in which profit incentives conflict with public-health goals. There is, for example, the whole realm of “orphan drugs” for treatment of diseases so rare that they don’t offer profitable markets, so government subsidizes their production. A good example is Revlimid, a treatment for multiple myeloma. Don’t subsidize them and a profit-maximizing private sector won’t produce them, for the same reason that for-profit insurers won’t cover the sickest people if they don’t have to. In either case, the unpleasant consequences would be rational, efficient outcomes by the logic of the marketplace.

It’s that same logic that incentivized “pharma bro” Martin Shkreli to buy the manufacturing license for the antiparasitic drug Daraprim and jack up the price 56-fold to $750 a pill. You can argue that poor regulation played a role in Shkreli’s scam, but it did so by accommodating the sort of feral greed that Gordon Gekko assured us is a social virtue. Shkreli went to prison, of course, but for securities fraud, not for trying to hold sick people hostage to his bottom line. That remains perfectly legal.

Abetting the cult of the marketplace is the idea that any constraint on personal freedom, no matter the reason, is a first step toward the Gulag. This is partly what explains protests in Minnesota, Michigan, and Virginia against state lockdowns ordered by Democratic governors. (Since no populist uprising is complete without the specter of a nanny-state anschluss, Lansing’s march reliably featured a “Heil Witmer” placard, presumably a reference to Gov. Gretchen Whitmer.)

There is a similarly juvenile complexion to the determination of Republican Governors Ron DeSantis (FL) and Brian Kemp (GA) to reopen for business, damn the science, and the petulant refusal by GOP champions of personal responsibility to wear face masks for a House vote. Let freedom ring.

Another staple of right-wing populism that ought to die in the pandemic, but probably won’t, is a reflexive vilification of “experts” — the quote marks are mandatory — that conservatives have exploited at least as far back as Joe McCarthy. Knowing stuff and discussing it in depth is as big a liability for Sen. Elizabeth Warren (D-MA) today as it was 65 years ago for Adlai Stevenson, the very symbol of eggheaded erudition.

COVID-19 provides the clearest contest of reason and Gut since maybe the Scopes trial.

That didn’t just happen by itself. It took hard work, as Fox News founder Rupert Murdoch could tell you. Murdoch and sidekick Roger Ailes astutely leveraged synergies between mass electronic media and the sort of people who think Glenn Beck is a sage philosopher. That allowed them to profit by moving the national conversation “southward from the brain to the Gut,” as Charles Pierce put it, deftly mining the cultural stratum that historian Richard Hofstadter explored in his 1963 tome Anti-Intellectualism in American Life. Hofstadter regarded contempt for expertise as more a feature than a bug, but that was before people like Donald Trump dialed it up to lethal amplitude.

As Trumpist know-nothings joust daily with science, COVID-19 provides the clearest contest of reason and Gut since maybe the Scopes trial. Trouble is, these battles are waged in a messaging marketplace where it’s not the strongest argument that wins but the loudest noise machine, and we all know who owns that. This should worry anyone not delirious with populist swamp fever, which, like COVID-19, may not confer its own immunity.

It should be clearer after November 3 whether COVID-19 will bolster regard for science, or whether the political culture will surrender more ground to the tyranny of the Gut. The question for Gut voters, as author Michael Lewis put it recently, is whether they have “backed themselves into such a corner that changing their mind is tantamount to changing their identity.”