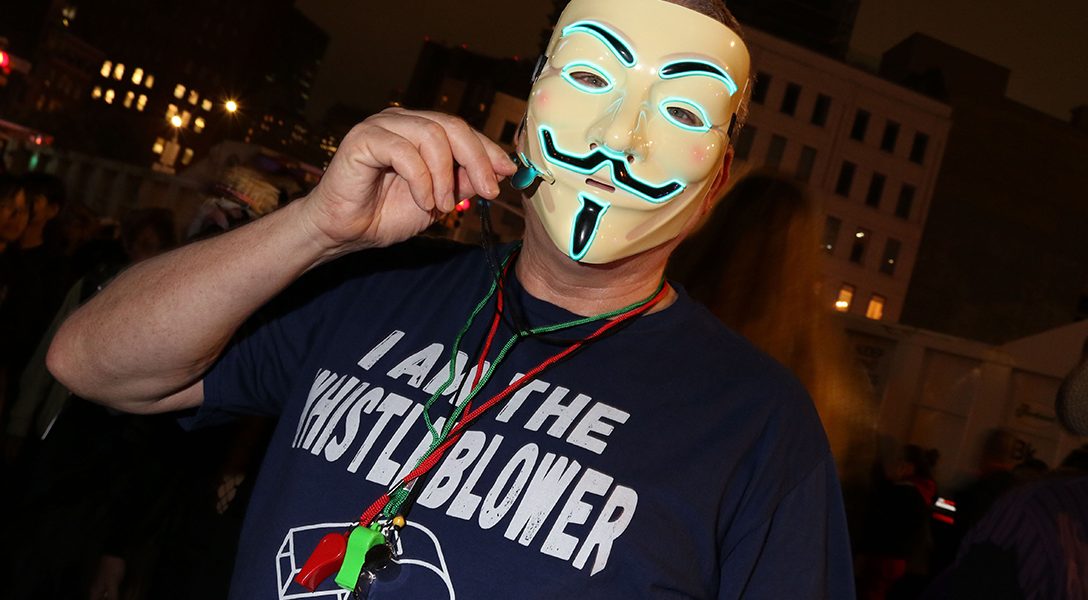 A Threat to a Whistleblower Is a Threat to Us All

The anonymity of the Ukraine whistleblower is hanging by a thread. Conservative media outlets have been reporting the name of the person they believe filed the complaint that triggered the impeachment process.

The person’s alleged identity has been circulated on Capitol Hill by House Republicans, and tweeted out by the president’s son Donald Trump Jr.

We already know what President Donald Trump thinks about the whistleblower. He considers him or her to be “almost a spy,” and a “never Trumper” who deserves to be unmasked. A few days ago, Trump opined: “The whistleblower should be revealed, because the whistleblower gave a false story.”

Meanwhile, tweets and emails to the whistleblower’s lawyers have been so savage that they fear for the individual’s life. Without the ability to reach their target directly, supporters of President Donald Trump threatened the attorneys with “a bullet to the head.”

One message says: “Die, you piece of filth!”

Things have gotten so bad that on Friday, attorney Andrew Bakaj sent White House counsel Pat Cipolllone a “cease and desist” letter, warning him that the president’s “dangerous and reckless” rhetoric placed the whistleblower and his or her family in “imminent danger.” Should the whistleblower suffer any harm, Bakaj warned, Trump could be in “legal and ethical peril.”

Federal law, we are told, protects the whistleblower’s confidentiality. But that protection is hardly bulletproof. Inspectors general are “required to keep confidentiality to the extent possible,” Elizabeth Hempowicz, director of public policy for the Project on Government Oversight (POGO) told WhoWhatWhy.

But, she adds, that requirement “doesn’t apply to the president. So there’s nothing legally stopping the president from making the whistleblower’s identity public.” To date, Trump has not circulated the alleged name of the whistleblower. His top advisers reportedly have told him that outing the whistleblower would not play well politically. Unmasking the whistleblower seems particularly punitive now, after scores of government officials, and a partial transcript of the Trump Ukraine call, have corroborated the essential facts of the complaint. And there might be greater advantage in questioning the motives of an unknown someone who cannot refute the charge of partisan bias.

Other federal laws — such as the Privacy Act — make it illegal to disclose the identity of certain intelligence agents, and might in theory also help protect the whistleblower. But they, too, aren’t  foolproof. They didn’t prevent a White House official from revealing that Valerie Plame was a covert CIA operative, Hempowicz observed.

Plame was outed because the George W. Bush White House was furious that her husband, Joseph Wilson, had accused the administration of having no evidence to support its claim that Iraq possessed weapons of mass destruction, which was its rationale for invading the country.

No one was charged with the Plame leak, although Lewis “Scooter” Libby, an aide to Vice President Dick Cheney, was convicted for lying to the FBI about it. Trump pardoned him in 2018.

In the Ukraine case, some Republican elected officials have offered measured support. But it’s been way too little. Sen. Chuck Grassley (R-IA), who has a long history of supporting whistleblower causes, had been pretty quiet until November 6, when Sen. Rand Paul (R-KY) chided reporters for not unmasking the whistleblower.

Sen. Grassley told reporters in a call Wednesday that it's important not to reveal the identity of intelligence agency whistleblowers because it could endanger them. https://t.co/cLRrvby2VZ

Speaking at a Trump rally, Paul scored points with the Trump base when he shouted: “I say tonight to the media, do your job and print his name. … And I say this to my fellow colleagues in Congress, to every Republican in Washington: Step up and subpoena Hunter Biden and subpoena the whistleblower!”

But even after Paul’s rant, the strongest Grassley could come up with was a request that members of Congress and the president “abide by the law” and protect the whistleblower.

“Bottom line answer: I expect the law to be followed,” he told reporters. “Most whistleblowers that come to me don’t mind their publicity, they aren’t seeking anonymity. If they did, I would probably try to protect that anonymity.”

No, if the whistleblower is to be protected, the responsibility falls to the American public and the news media.

News outlets must continue to keep the lid on, despite the Breitbarts of the world circulating his or her alleged name. Despite Trump’s taunts asking reporters to reveal the name, suggesting that their respect for confidentiality is itself proof that they’re in cahoots with Democrats.

The public must let their elected representatives know that they expect them to protect confidentiality, too.

A lot more is at stake than the life and sanity of one person. If whistleblowers become so frightened by this treatment that they fail to come forward, we all lose.

Think of a world without the Pentagon Papers; without journalists warning us that our government was embarking on warrantless surveillance of its citizens; without the assurance that, when agencies fail to protect our health or safety, someone will sound the alarm.

Or in the words of eight former federal inspectors general:

Not protecting whistleblower confidentiality would seriously inhibit future disclosures and cause serious harm to the role of oversight to ensure good government; would lead to greater illegitimate leaks of classified information that could compromise our national security; encourage unchecked misconduct, especially in classified environments; contradict the intent of constitutional checks and balances; and further erode the public’s trust in the institutions of government and the rule of law.