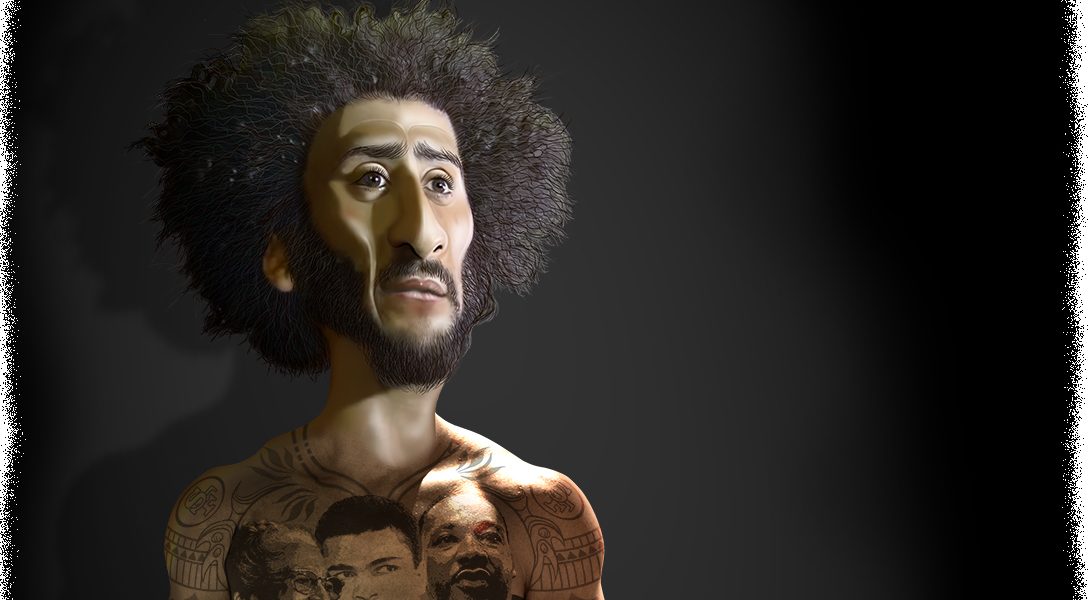 The Most Un-American Thing in the Kaepernick Saga

In a country that apparently has nothing more pressing to focus on right now, the hottest story last week was that of San Francisco 49ers quarterback Colin Kaepernick refusing to stand for the national anthem.

In explaining his small gesture of protest, Kaepernick said he would not “stand up to show pride in a flag for a country that oppresses black people and people of color.”

Predictably, some Americans lost their mind over this. Even Donald Trump weighed in on the “controversy.” The Republican nominee called Kaepernick’s protest “a terrible thing,” and added “maybe he should find a country that works better for him.”

It is particularly ironic that the people who want to “Make America Great Again” are using the tired “America, love it or leave it!” line. After all, the same could be said to anybody who wants to make any change to the status quo — such as, perhaps, building a wall along the entire US border with Mexico.

Kaepernick is using his status as professional athlete to highlight something that he perceives to be a problem in the US. The only “un-American” thing about his conduct is the fury of people who believe that Kaepernick should be punished for exercising his right to freedom of expression.

By the same logic, women would never have earned the right to vote. After all, if an American woman wanted to vote prior to ratification of the 19th Amendment, all she had to do was move to New Zealand or any of the other countries that already afforded women that right.

What about the civil rights movement? It wouldn’t have happened. Rosa Parks, you want to sit down on any seat you choose on a bus? Well, why don’t you hit the road and move to a country that isn’t segregated? And Martin Luther King and his famous speech? Dream on, buddy, not in 1960s America.

And let’s not forget the actions of perhaps the most revered athlete of them all: Muhammad Ali, whose life was recently celebrated by many of the same people now criticizing Kaepernick.

There is one thing that all people who take a stand (or, in the case of Kaepernick and Parks, those who do not stand) have in common: They are being vilified — and often threatened — for speaking out against injustice.

Make no mistake about it: Social change is not a comfortable process. But to progress as a society, America must recognize that protests are often necessary because they get people to confront an issue they would rather ignore.

Sadly, those who resist change always make it about the person… and not the issue. For them, it is much easier to attack somebody like Kaepernick and tell him to leave rather than to look at the underlying problem. Or in the mirror.

The poorest community in America is not in Boston, New York, Chicago, Dallas, Houston or LA. It’s Pine Ridge Reservation of the Oglala Lakota Sioux in South Dakota.

He isn’t only Protesting for Black Americans. If you listened to what he said you would know he stated; for the injustice to Black and other minorities in America. I would think that it also meant Native American Indian unless you believe that they aren’t part of the minorities in America. I’m a Baby Boomer who also a Disabled Black Vietnam veteran who understands exactly what he’s protesting against. Why don’t you join him instead of chastising?

If he wants to protest not being able to get a McRib year round and sit during the anthem, he has every right to do so. The purpose of the 1st Amendment (yes that is the only issue this is truly about) is to protect his God given right to protest or say whatever he want (including being an ignorant idiot if he chooses), and anybody who says he shouldn’t do what he is doing, or who thinks he should be murdered or deported (can’t deport natural born citizens) or whatever the fascist echo chamber is chattering about, they are the ones who are un-American (whatever that really means). You either believe in the 1st Amendment whole heartedly (it was put in there to protect unpopular speech, think KKK), as well as the rest of the Constitution or you do not. You do not get to pick and choose who gets to exercise their God given rights. FYI, I say this, not as a football fan (I am not, haven’t watched a game by choice in over a decade) but a an ardent supporter of unfettered liberty, even the things that I despise (like femi-nazis). Plus if the reports are correct, he was put up to this by his agent (handler) or something, so he is just a pawn in a major psy-op distraction. And to be honest, actually more than a 1st Amend issue, this is ultimately just a distraction from Hitlery’s health, eveything illegal Obama does (ie everything he does short of breathing) and the fact that we are in de facto WW3 (think about all the conflicts and wars going on WORLDWIDE, ie WW3). And the fact that so many alleged adults, many of whom claim to be intelligent, are even concerned with this non-story shows the truly sad state of the American populace.

“The superpatriots tell us that in many countries people do not have the right to criticize their governments. Presumably, we should show gratitude for our freedom to dissent by refraining from dissenting, and if we speak freely and critically, we are proving ourselves ungrateful
and therefore unworthy of the right to speak. It seems we “abuse” our rights by simply using them. To repeat, the only thing to match the superpatriots’ celebration of our freedom in the abstract is their intolerance toward anyone who actually puts that freedom into practice.

“Some superpatriots think that we must not criticize the wonderful country that has given us so much. In fact, we were not given anything, certainly not by those who have ruled over our society. The American people, including all the immigrant groups and minorities, have had to
fight long and hard for whatever rights they now enjoy….

“Why should we feel indebted to the ruling moneyed interests for “giving” us the good life, when in fact they furiously resisted every democratic and egalitarian gain that the American people have won over two centuries of struggle, every advance in labor relations, popular electoral participation, public education, environmental and consumer protections, retirement benefits, human services, and other worthwhile measures. Like the good reactionaries they are, the plutocrats continue to oppose most of these things. And in recent decades they have enjoyed increasing success in bringing us back to the old days of Big Money and small democracy.”

When one understands the motivation behind the War of 1812 (the invasion and “liberation” of Canada from Britain – sad that we still pull that kind of garbage), the fact that this war almost caused the New England states to exercise their legal and constitutional right of secession over their opposition to this unconstitutional action, the fact that Britain gave refuge to any slaves that could escape to their ships off the coast and was going to free the slaves if they won, and that one of the verses of the song celebrates the deaths of the slaves who escaped and helped the British wage their war to protect their Canadian colony (“No refuge could save the hireling and slave From the terror of flight, or the gloom of the grave”) it is hard to appreciate why ANYONE would want to sing this song as their “national anthem.”

It was an entirely different country back then. Look at it today. You don’t see progress? Most of the black people who fought with the British back then all fought better than the Royal Marines. Today is a very different story. People have to stop living in the past. My bet is that Kaepernick could not even hold a conversation about the War of 1812. I am not even sure he understands what or who is influencing his decision to protest.

The saddest part is that his protest has NOTHING to do with how horrible the anthem is or what it represents. It is appropriate that he is upset with the out of control police state, but he should begin by recognizing that NO GOVERNMENT CAN EVER BE TRUSTED and to withdraw his support for government in general. The police state is little more than a symptom of the big-government policies that blacks have generally been supporting since at least the 1960s.

Do you know Colin personally? Why do you presume to know anything about what he understands and what influences his decision to protest ? That would be like me assuming you have never experienced racism, been profiled or harassed by police.

Actually I do know the General.

The day that the entire lower class ( i.e., all of us 99% peons ) starts refusing to stand for the national anthem is the day we start making progress towards fixing what ails this society.

Well said…I am frustrated with the level of racism and bigotry in the alt media…this guy put his career and reputation on the line to make a statement against tyranny and people attack him for it…they have bought into the globalist divide and rule agenda and are too stupid with hatred to realize it.

I do believe we are the greatest country in the world, but we are nothing close to what we say we are. Second amendment good, first amendment bad?

We are a hypocritical nation, not all, but many. The ones who don’t like protest say, ‘love it or leave it’. How many of them are white supremacists? Let’s all wake up and smell the hatred and the racism. If people did not protest, even more people of color would be oppressed.

Instead of booing protesters, talk with them, work with them. Let’s be the country we say we are. Otherwise, we’re just another country with privileges for some, not all.

Adults don’t say things like “we are the greatest country in the world.”

Racism, like Islamophobia, is a strategy, a tool, of the ruling class and the capitalist-imperialist system.

Kaepernick mentioned more than just oppression of black people. He also said Trump was openly racist, Hillary essentially was too (calling black teens “super predators”) and that what Hillary did would get any other person thrown in jail.

Openly racist? I am not a Trump supporter and I rather see Hillary in convicted of perjury at least if not one or two counts of the espionage Act. Saying that Trump maybe many things but racist is not one of them. Building a wall to stop the illegal flow of immigrats is not being racist. Matter of fact building a wall has been talked about before. Temporarily stopping visas from Iraq, Syria and Afghanistan as well as other ME countries until our security services can come to grips with this crushing refugee crisis, of which we caused, thank you Mr. President and Secretary Clinton, is not racist. Matter of fact it has the support but of both the D/FBI -CIA and even DNI. Additional the last six presidents have done such things in executive orders this to include President Obama.

Clinton and her remarks? She was talking about the gangs in the inner cities.

Hey. You want the cops to do something? Well then it’s your community you know who pulled the trigger? Make the call….