“HEY YOU UGLY ASS PSYCHOTIC BITCH. YOU BELONG IN PRISON,” said the message sent to Lacie Wooten-Holway at 7:25 p.m. on Sunday, May 9. “HOW THE FUCK ARE YOU A TEACHER????? YOURE IN FOR A RUDE AWAKENING YOU STUPID BITCH.”

It wasn’t the first such message she received, and it wouldn’t be the last. The barrage of threats continued for days.

What she had done wrong, in the eyes of her harassers, was organize peaceful protests outside of the homes of Supreme Court justices. These had begun in October of 2021 but garnered more attention after a draft opinion was leaked indicating that the court’s conservatives were planning to overturn Roe v. Wade, the decision that grants women in the US abortion rights.

“Your ‘protest’ is going to end poorly for you,” wrote another stranger, and he was not wrong. Over the following weeks, Wooten-Holway received dozens of threats, was forced to quit her job, and is, at least temporarily, relocating her family from DC.

“I feel unsafe basically all the time now,” she told WhoWhatWhy.

Wooten-Holway’s ordeal began when The Washington Post profiled her as the organizer of the protests in the Chevy Chase, MD, neighborhood she shares with Justices Brett Kavanaugh and John Roberts.

Every Wednesday evening, Wooten-Holway and her fellow advocates — whom she refers to as the “good trouble patrol” — would march, chant, and hold their signs up high.

While these protests were lawful and nonviolent, right-wing commentators were quick to suggest that they posed a threat to the safety of the justices and their families. Conservative figures such as Tucker Carlson characterized the peaceful protesters as a “mob” and their actions as “intimidating.”

The Fox News host repeatedly mentioned Wooten-Holway by name, and other right-wing commentators published her home address and information about her workplace.

“This is the woman that organized the protests to terrorize Justice Kavanaugh & Justice Roberts tonight,” tweeted Amy Kremer, the co-founder of Women for Trump, along with screenshots of Wooten-Holway’s picture, address, and occupation.

“She’s a deeply unhappy individual,” Carlson said during a May 9 broadcast. She “brought the mob to Kavanaugh’s house,” he said.

For all the discussion among conservatives about the risk protests pose to the justices, the person who has suffered the most thus far appears to be Wooten-Holway herself — and experts say those same conservative commentators, who expressed concern for the justices while repeatedly sharing Wooten-Holway’s name and personal information with their followers, are responsible.

OF COURSE, she's a teacher. https://t.co/ROMelj2glM

“When Tucker Carlson makes those comments about her, when he uses her name and then connects her not only to this very defined issue of Justice Kavanaugh and his role on the Supreme Court, he connects her to the entire attack on Christianity,” said Chris Demaske, associate professor of communication at the University of Washington and author of Free Speech and Hate Speech in the United States: The Limits of Toleration. “So he’s opened up basically the floodgates and called for his audience to act.”

And act they did.

The threats against Wooten-Holway began almost immediately after Kremer and Ann Coulter tweeted about her. So did her fear.

One woman all the way in Michigan called the Montgomery County Police to check on the Wooten-Holway family because she was so concerned by the threatening social media messages she saw. The police visited the family and told them this woman was worried they were all going to be shot.

On May 10, a gray truck pulled up in front of Wooten-Holway’s house, and a man dressed in khakis and a white button-up shirt got out. He walked up to her house, pulled out his phone, and started snapping pictures of her home. She was standing on her front porch and immediately yelled for her husband.

“I instantly got chills,” Wooten-Holway said. “I was so scared.” 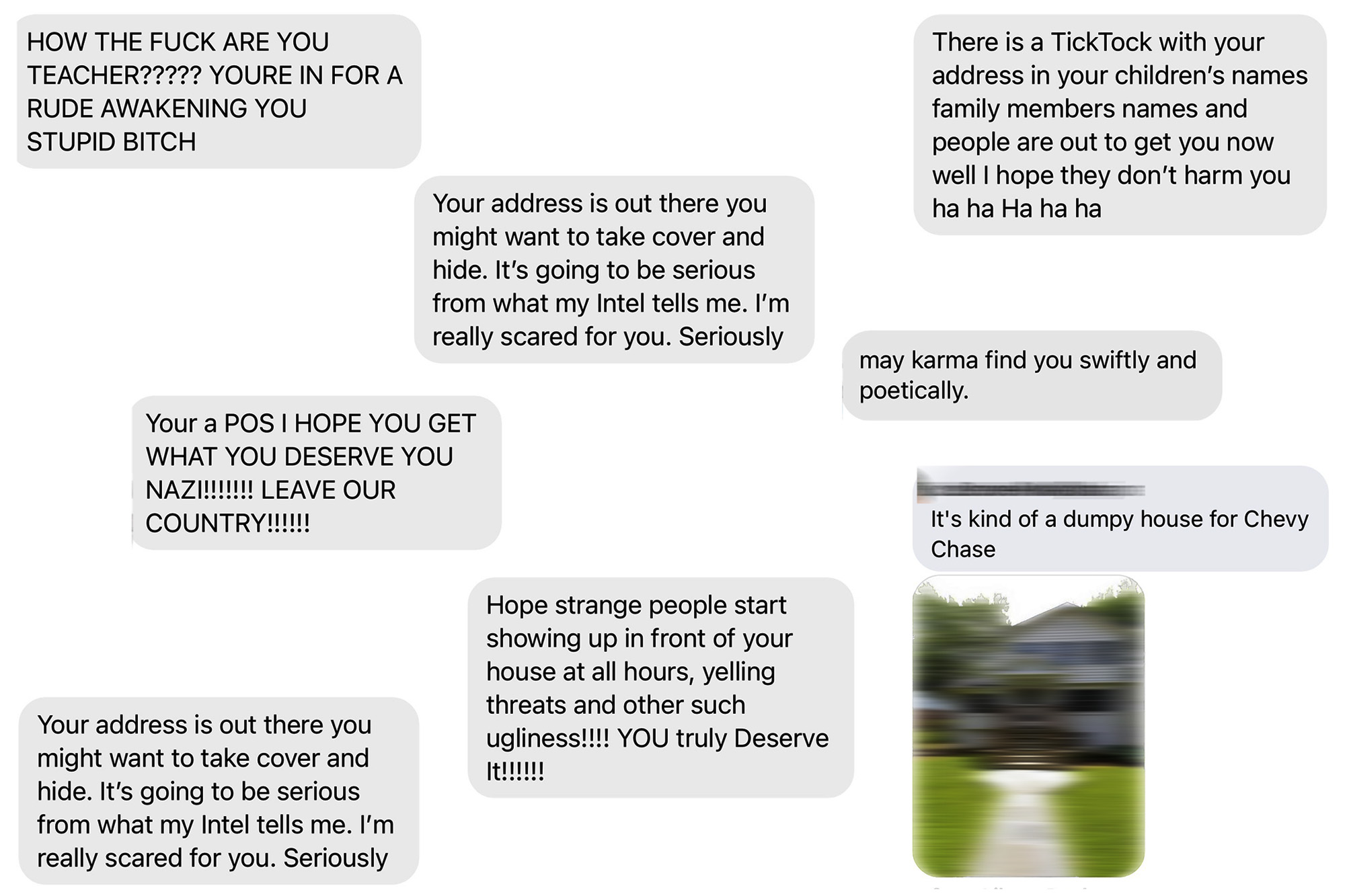 For the first few weeks they received threats, her husband walked around the house with a bat. They have also been forced to take multiple measures at their own cost to increase safety, including changing the locks, implementing a new security alarm system, and hiring private security.

Wooten-Holway does not let her children leave the house unaccompanied.

The harassment went beyond Wooten-Holway’s family. According to a document obtained by WhoWhatWhy, the school where she worked also received many threats via phone calls, emails, and social media comments.

Wooten-Holway described the messages as threats to show up at teachers’ homes, board members’ homes, and the school.

In response, the school recruited law enforcement and asked Wooten-Holway to temporarily stay home. School officials removed staff directory pages from the website and limited the students’ time outside.

“They had to bring police protection on, and that was really frightening for the kids,” she said. 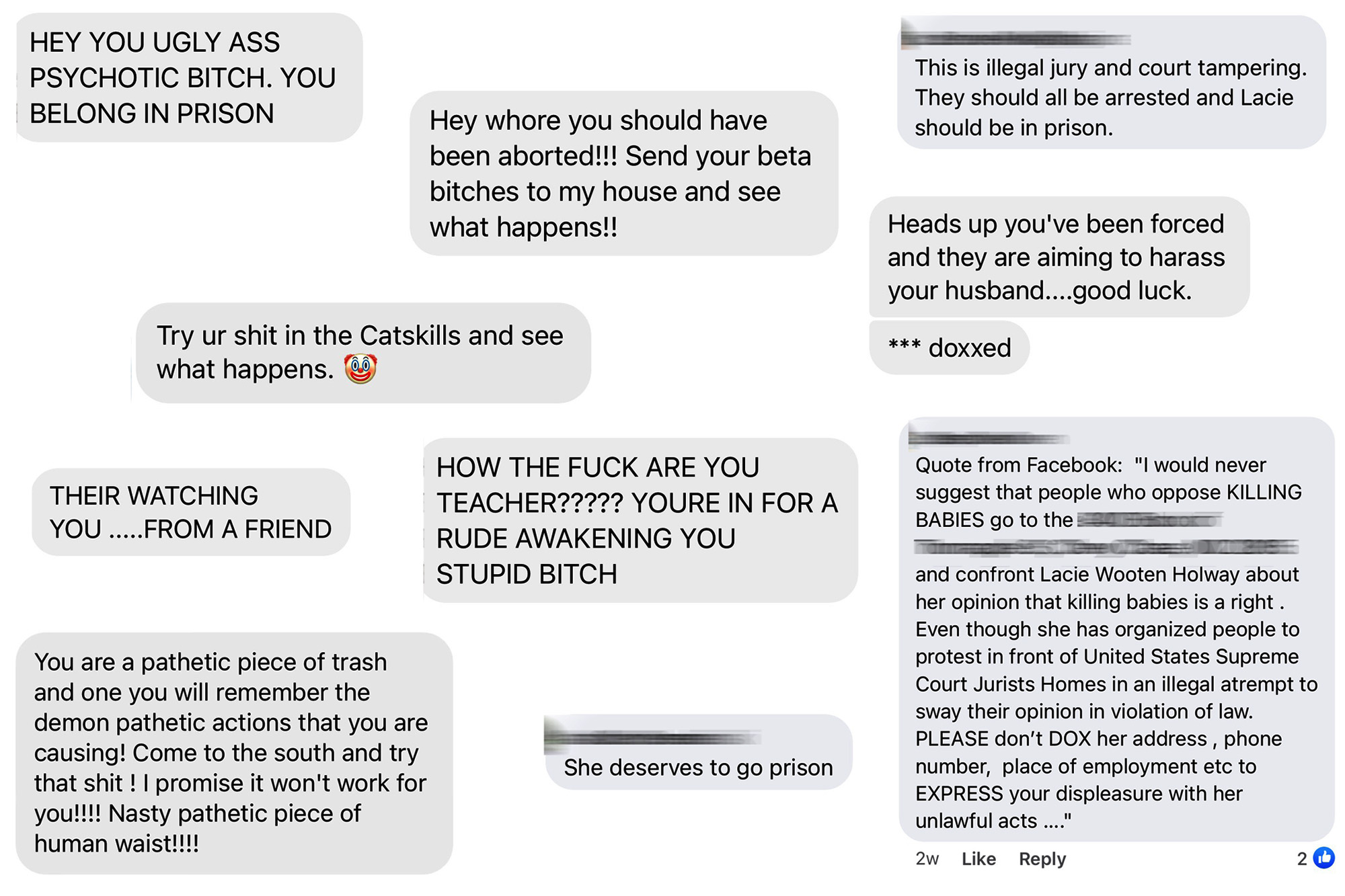 On May 17, Montgomery County police officers responded to the school’s description of an email threat and an incident report was filed, a spokesperson stated in an email to WhoWhatWhy.

Wooten-Holway had a lot of anxiety about returning to teaching, not just for her own safety but for the students’ as well.

This is one of the reasons why Wooten-Holway ultimately decided to resign from the teaching position that she held for five years. 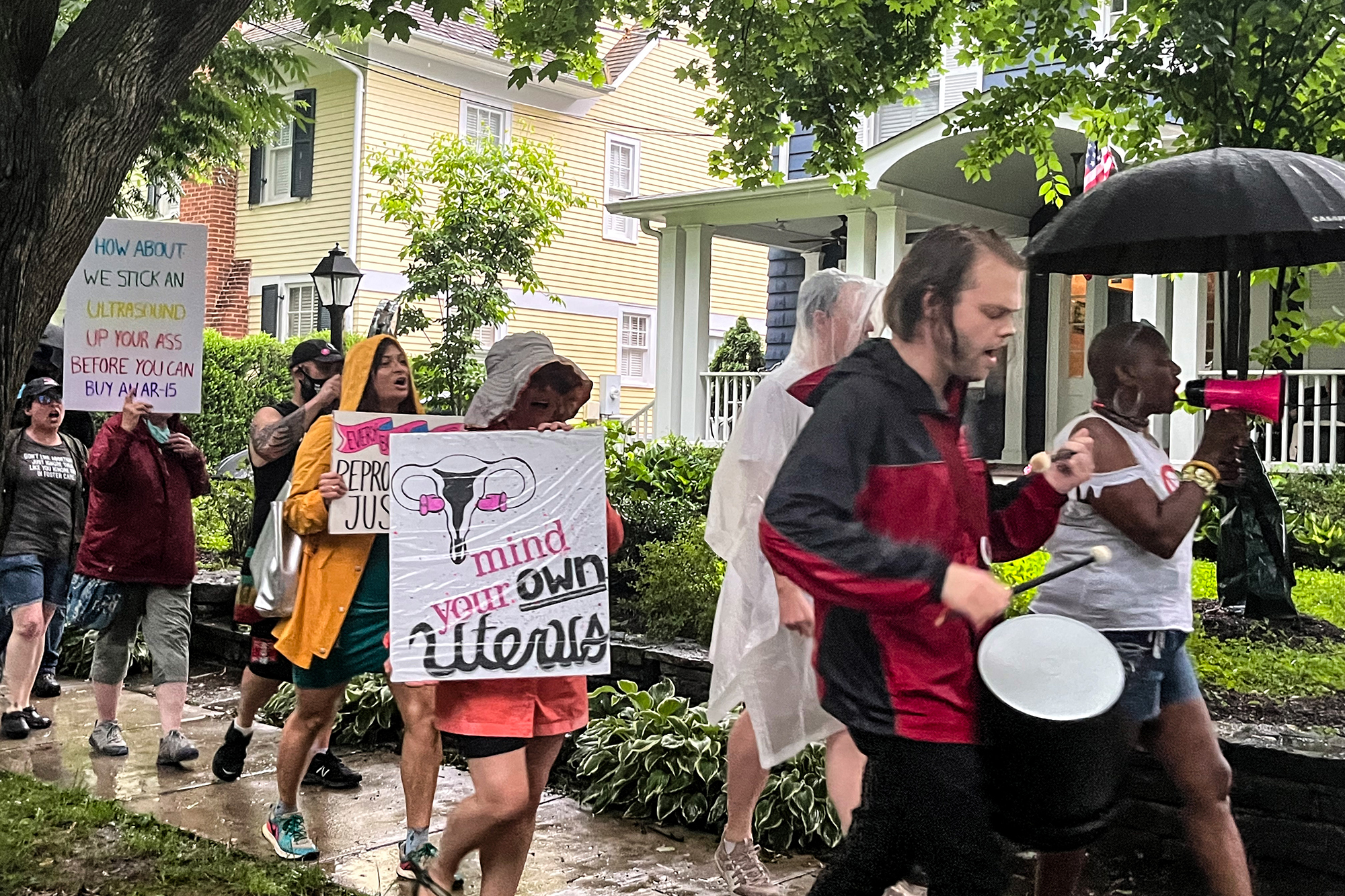 When private citizens are harassed online, they have little to no recourse. One reason for this, Demaske said, is that laws have not caught up with social media.

To secure legal protection, Wooten-Holway would have to make a claim against every person who threatened her via social media. Demaske said that if she were to make a claim, it would be difficult to prove there is an immediate danger because of their online nature.

Nevertheless, “She has every right to be terrified,” said Demaske. “It’s not just threatening messages online. It’s people showing up to schools, and grocery stores, and synagogues, and killing people. And so, the threats that she is feeling right now, those are very real.”

“In the case of Tucker Carlson and Ann Coulter, they clearly want people to act. There’s absolutely zero reason to publicize her name and her address, unless you are asking people to target her.” — Chris Demaske

Demaske argued that public figures like Carlson are responsible for the predictable effects of their words, especially when they use their platforms to weaponize radical hate groups.

“There’s absolutely zero reason to publicize her name and her address, unless you are asking people to target her, which is really problematic,” Demaske said.

WhoWhatWhy reached out to Carlson, Coulter, and Kremer but had received no response at press time.

Demaske noted that the level of protection available to private citizens is also vastly different from that available to public figures. When an armed man went to Kavanaugh’s home last week, for example, he was arrested and charged immediately.

“I’m not saying that it’s not uncomfortable to be in [the justices’] homes. I’m sure that it is, but it’s not threatening in the same way that it is going to be for a private citizen, who does not have that kind of ability,” Demaske said.

A case in point is Tuesday’s passage of legislation that would protect the families of Supreme Court justices. The measure cleared the House 396-27, and President Joe Biden is expected to sign it quickly.

Members of the public, however, “have very few options,” said Soraya Chemaly, director and co-founder of the Women’s Media Center Speech Project. “The onus is still on those individuals to keep themselves safe.”

Securing that protection can take resources which many individuals simply do not have. 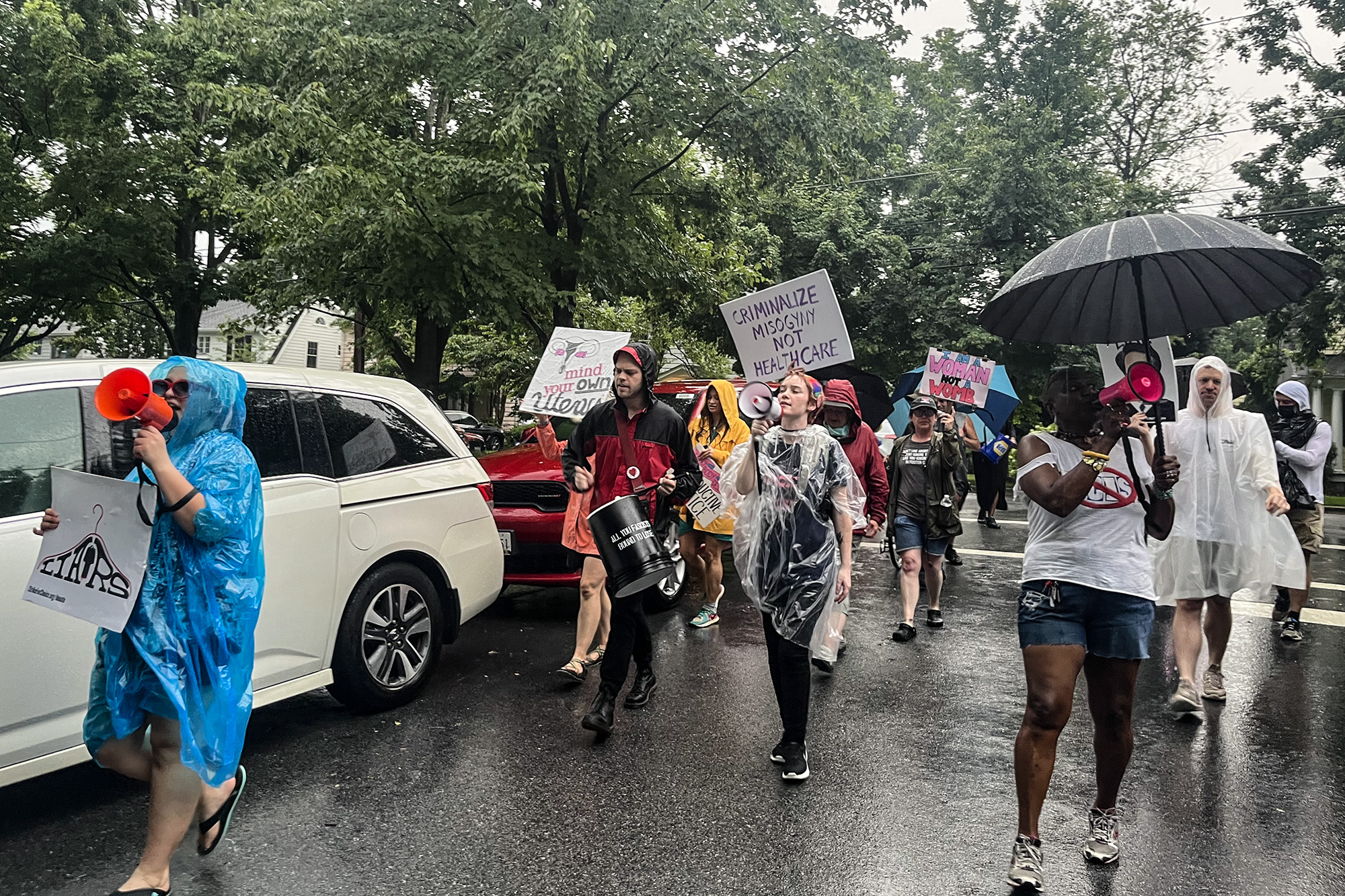 Wooten-Holway took a step back from the protests for a few weeks, but after seeing other women come together in her place to keep the advocacy efforts going, she decided to return. And she did for three weeks.

This previous Wednesday, she put on her yellow raincoat, held her sign, and braved a heavy storm to join the rally. As rain poured down on her, soaking her hair, she kept marching and chanting with her advocate friends, whom she said have become like family to her.

Though she said it felt good to return to her passion for abortion advocacy, this protest would be her last for a while. The Wooten-Holway family is temporarily moving away from the DC area to stay safe and sane.

“I think it’s best for our collective mental health,” she said. “It’s getting harder and harder to remain.”