Despite public demonstrations, lawsuits, and wall-to-wall media coverage, women in Texas, where almost all abortions have been de facto illegal since early September, are still visiting clinics, only to be surprised to discover what they’re seeking is now illegal.

“Many individuals are surprised when they get to the clinic and we let them know they can’t get an abortion,” said Bridget Schilling, a board member at the Houston-based Clinic Access Support Network.

In the month since the US Supreme Court declined to review a controversial state law passed in May, Texas women seeking abortions must travel out of state or seek risky alternatives, such as abortion pills not approved by the FDA ordered online from Europe or Asia, or other off-market drugs purchased at flea markets or other secondhand sources.

For women of color and the poor, for whom material conditions already made abortion access difficult or near-impossible, this state of affairs is not too far removed from the status quo before the law.

Certain areas of Texas, including the Rio Grande Valley, were already medical care “deserts.” One-quarter of abortion clinics closed in Texas between 2014 and 2017, according to the Guttmacher Institute. And 96 percent of Texas counties had no clinics that performed abortions, a 2017 survey found.

This means women were already forced to ponder driving long distances in the vast state — or seek riskier alternatives close to home, including self-induced or self-managed abortions.

Abortions obtained via these “non-official channels,” such as the illicit-market abortion drugs, will now only increase, according to Jessie Hill, a professor at Case Western University School of Law.

“This is now the most restrictive abortion law not only in the United States but in the developing world.”

The only alternative for women who “don’t have the freedom or resources to travel” is “having to carry to term in Texas,” said Texas attorney Michelle Simpson Tuegel, who sued to block the abortion law.

But exactly what women are doing in Texas, which averaged more than 55,000 recorded abortions annually, is still unclear.

“Women call us, and then sometimes I don’t hear from them on what they decide to do and when,” said Tuegel, who indicated that calls for help are decreasing, since women are worried they may be penalized simply for asking about reproductive services.

Considered the most regressive restrictions on abortion in the US and the biggest threat to rights afforded under Roe v. Wade, Texas’s new law, SB8, bans almost all abortions after six weeks gestation and makes no exception for extreme circumstances including incest and rape.

Last year, Texas recorded 13,509 rapes, the highest in the country.

In a cynical and devious twist, the state leaves enforcement up to private citizens, who can file a civil lawsuit against anyone assisting a woman to have an abortion — including an Uber driver. Rewards of up to $10,000 are promised.

SB8 has drawn a slew of challenges, including lawsuits filed in both state and federal courts by abortion advocates as well as the Department of Justice.

While advocates say there are doctors willing to perform the procedures in defiance of the new ban and the “vigilante” citizen lawsuits that promise cash rewards to anyone identifying an abortion provider — such as Alan Braid, the San Antonio physician who declared in a Washington Post op-ed that he’s already done so — major reproductive services providers like Planned Parenthood are so far complying with the law, as experts and advocates told WhoWhatWhy, and as witnesses told Congress last week.

“Abortion care has almost completely stopped in our state,” Dr. Ghazaleh Moayedi, a Texas physician who formerly provided abortions, told the US House Oversight and Reform Committee during a Thursday hearing.

“This is now the most restrictive abortion law not only in the United States but in the developing world,” said Swapna Reddy, an associate professor at Arizona State University. “I think it is important to recognize and to put this in perspective.”

From Bad to Worse

While creating a “vigilante” justice system straight out of the Wild West, Texas’s law also means women have just two weeks after their first missed period to realize they are pregnant, make a decision to have an abortion, find a provider or clinic that offers abortions, and raise the money to pay the service — an impossible timeline.

“Six weeks pregnant — and it’s shameful that this education needs to happen, because this conversation shouldn’t even be held in a legislative body — six weeks pregnant is two weeks late for one’s period,” Rep. Alexandria Ocasio-Cortez (NY) said at Thursday’s hearing.  “When you are raped, you don’t always know what happened to you. And I speak about this as a survivor. You are in so much shock.”

“I’m 115 pounds, you look at me funny, I’m two weeks late for my period,” she added. “And you’re expecting me to know that I’m pregnant? Or the stress of a sexual assault. That makes you two weeks late for your period, whether you’re pregnant or not.”

For women in lower economic classes, paying for an abortion — which can cost up to $1,500 in Texas — was difficult even before SB8. Cost is “one of the biggest reasons why people delay abortions,” according to Hill.

Instead of a daylong drive to the nearest Texas clinic, reaching a clinic out of state or in Mexico means Texas women must now travel up to 14 times farther, experts estimate. Some employers won’t allow for two to three days off, and arranging the logistics of child care, travel, and lost wages will lead many women to carry a baby to term.

But “most are unable to get the procedure because of money,” Schilling said.

On September 14, the Department of Justice sued, alleging the law “has gravely and irreparably impaired women’s ability to exercise their constitutional right to an abortion across the state.”

Attorneys for Texas argued the DOJ hasn’t demonstrated the legislation is unconstitutional — citing the fact that the $10,000 bounty isn’t being enforced by the state, but falls in the hands of private citizens.

Judge Robert Pitman of the US District Court for the Western District of Texas heard oral arguments on Friday. He gave no indication of when he would have a decision on the case.

There are several other cases that may reach the Supreme Court. One particular case, Hill noted, is a Mississippi case involving a ban on abortions at 15 weeks. Just this month the Supreme Court decided it will hear oral arguments on this matter on December 1. That may be the decision that, once and for all, decides the fate of Roe v. Wade.

“It is widely expected that the Supreme Court will use this opportunity to revisit Roe,” Hill said.

Some lawsuits brought by Planned Parenthood may also go up to the Supreme Court. But advocates say that the organization, possibly the most prominent abortion services provider in the country, could be doing more to challenge the law right now. 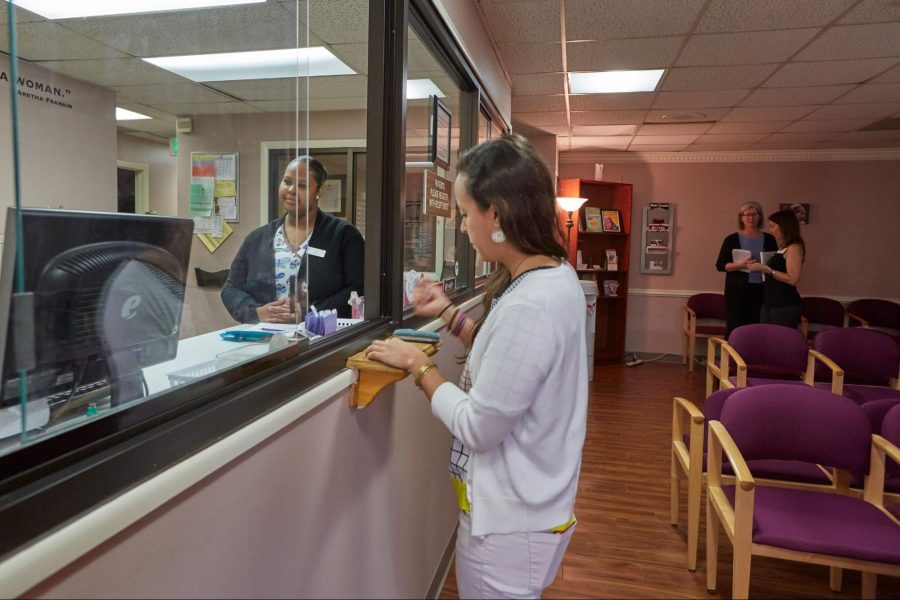 Whole Women’s Health clinic of Fort Worth, TX, is displaying this notice on their website, “ABORTION IS STILL LEGAL IN TEXAS, OUR CLINIC IS OPEN, AND WE ARE IN COMPLIANCE WITH SB 8.” Photo credit: Whole Women’s Health / New Voices / Flickr (CC BY 2.0)

Payouts Unlikely, but Law Paid Off

Although the law is written broadly to allow lawsuits and potential payouts related to anyone who breaks the law or aids anyone breaking the law, Hill thinks the possibility of payouts is relatively low.

“The law isn’t designed to result in these payouts,” she said. “It was designed to deter providers from violating the law.”

Planned Parenthood did not respond to a request for comment.

Tuegel said the organization should put Texas to the test and defy the law.

“I don’t want to be critical of Planned Parenthood because they’re so integral to women having access to other health care resources in Texas and other states,” she said, “but I wish they would open some clinics and just say, ‘Screw y’all, we’re going to keep providing for Texas women.’”