If You Want To Die Young — Take the Red Pill

If dying young appeals to you, here’s a simple bit of advice: Move to a state or county controlled by Republicans.

At first glance, the images below appear to be political maps. And in the most real sense of the word they are. The county-by-county differences shown by the map from Jeremy Ney’s brilliant American Inequality substack newsletter, and the state-by-state screen shot from the Centers for Disease Control’s National Center for Health Statistics below it, both reflect, in large part, decades of regional policy differences.

Long-lived parts of America have generally embraced progressive policies dating back to FDR’s New Deal. The early-death parts of our country most often reflect conservative opposition to everything from the working-class wealth that unionization and higher minimum wages bring, to the availability of health care through Medicaid expansion. 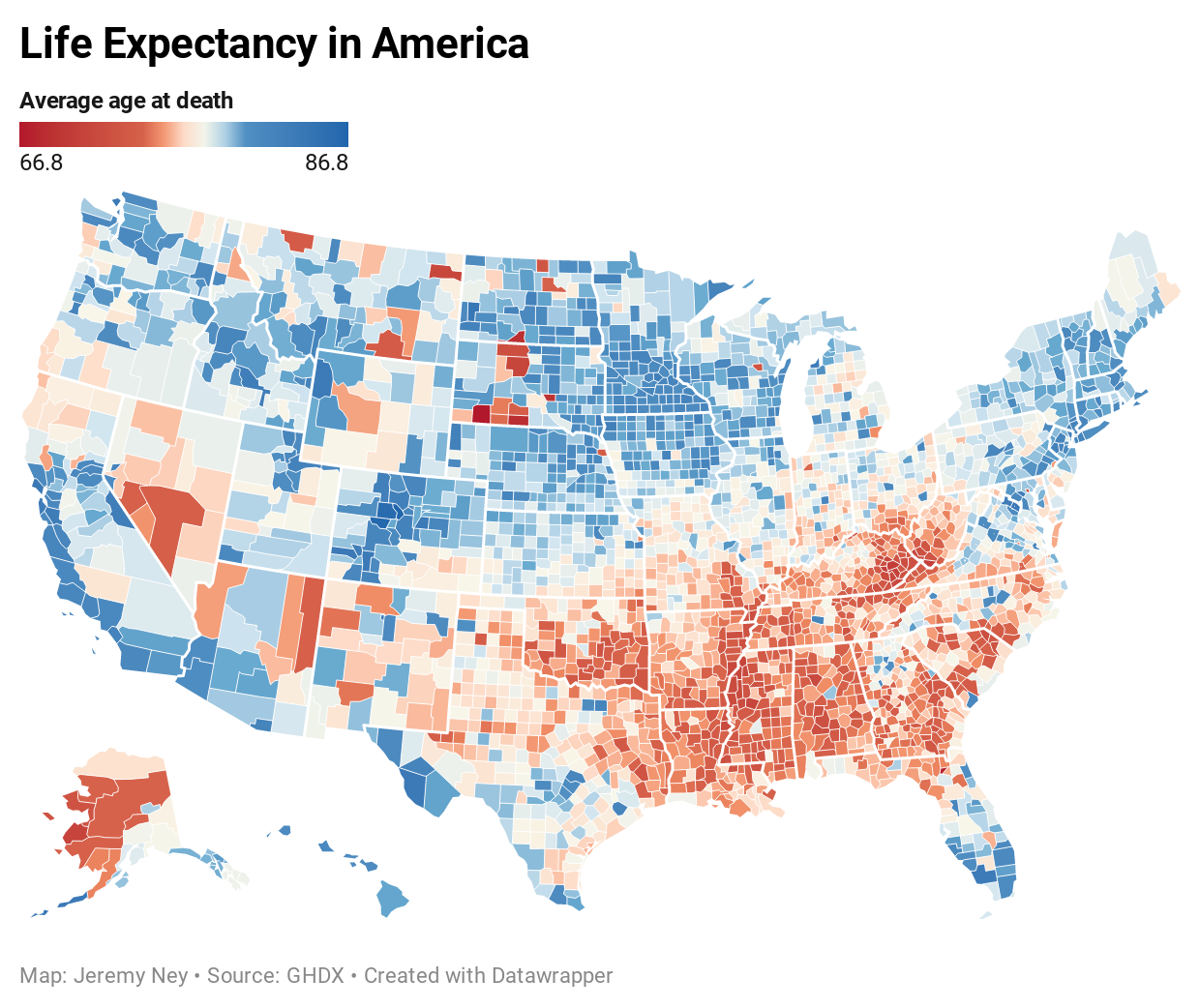 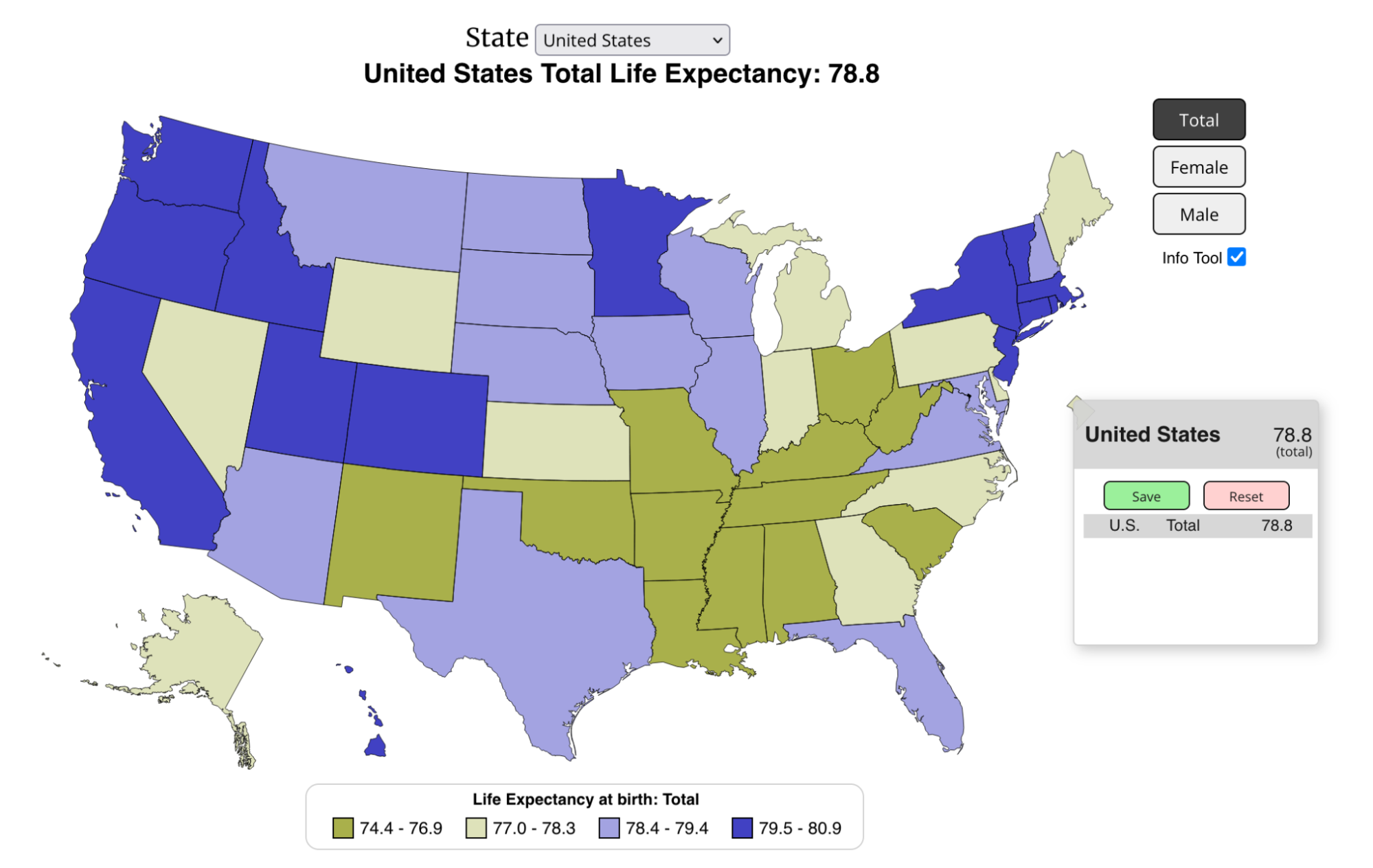 To zoom out ever farther, since many conservative policies affect the entire country, consider what happened to the health of our nation in the 1980s with the Reagan Revolution. It’s particularly visible when you compare the outcomes of our health care system with those in other developed countries.

Our World In Data lays it out starkly, as you will see below. One of the proudest accomplishments of the neoliberal Reagan Revolution — following a bill Nixon signed in 1973 that opened the door — was overturning laws in state after state that required both hospitals and health insurance companies to be run as nonprofits.

Reagan also, in 1983, ordered the DOJ, FTC, and SEC to essentially stop enforcing antitrust laws dating back to the 1891 Sherman Act, resulting in the “Mergers & Acquisitions Mania” that characterized the 1980s and inspired the “greed is good” movie Wall Street starring Michael Douglas.

Health insurance companies, hospitals, and pharmaceutical manufacturers all morphed from regional and competitive organizations into giant, monopolistic predators. Their profits exploded and our lifespans collapsed. Every year now, they spread hundreds of millions of dollars around Washington and state capitols to prevent regulation and maintain the status quo.

We are, quite literally, the only country in the world with a corrupt Supreme Court that has legalized this kind of a vicious attack on its citizens by a bought-off political party and their morbidly rich donors. The Republicans on the Supreme Court call it “free speech” but every other nation in the world knows it’s simply naked, criminal, political bribery. 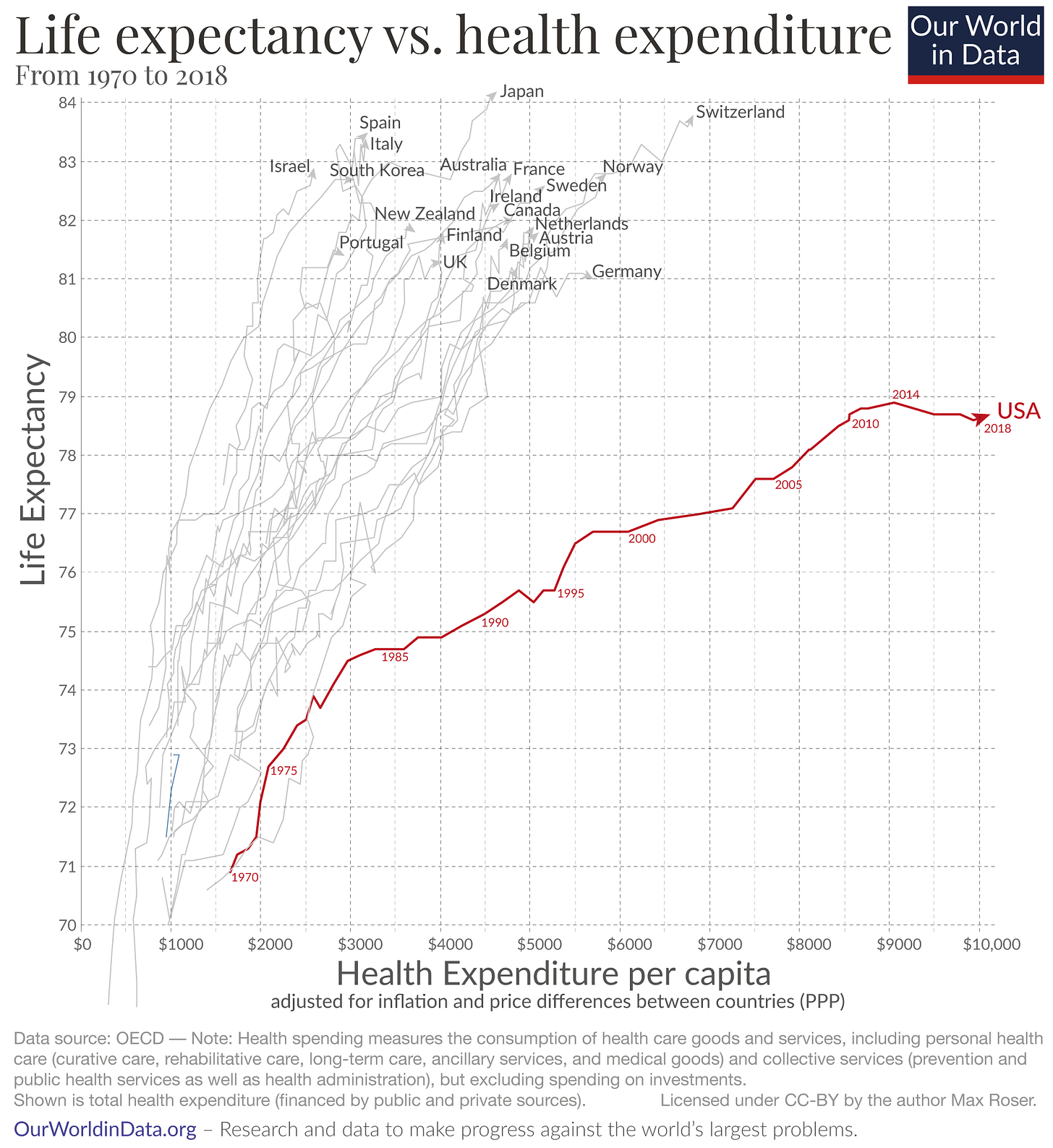 Photo credit: Our World in Data

As you can see above, the average American spends more than twice as much on health care every year than do the citizens of virtually every other developed country in the world. And, as the Reagan Revolution really bit hard in the 1980s and 1990s, our average lifespans collapsed while corporate health care profits exploded.

And it’s not just death by lack of health care that skews these statistics: If you’re concerned about being murdered, it’s also a good idea to avoid states run by conservatives.  As the centrist Third Way think tank noted last month:

In 2020, per capita murder rates were 40 percent higher in states won by Donald Trump than in those won by Joe Biden.

Eight of the 10 states with the highest murder rates in 2020 voted for the Republican presidential nominee in every election this century.

Jacksonville, a city with a Republican mayor, had 128 more murders in 2020 than San Francisco, a city with a Democrat [sic] mayor, despite their comparable populations.

In fact, the homicide rate in Speaker Nancy Pelosi’s San Francisco was half that of House Republican Leader Kevin McCarthy’s Bakersfield, a city with a Republican mayor that overwhelmingly voted for Trump.

And don’t even think about having sex in red states: They generally lead America in sexually transmitted diseases, presumably because most have outlawed teaching sex education in their public schools.

Speaking of schools, the states with the lowest educational attainment in the nation are all red. Ranked from terrible to absolute worst, they are: Idaho, Indiana, Oklahoma, Alabama, Nevada, Louisiana, Kentucky, Arkansas, Mississippi, and West Virginia.

As giddy as Republicans are about “owning the libs,” the citizens they govern pay a tragic price for the sport. They are literally dying as conservative politicians revel in their ability to cut taxes for the rich and suppress wages and health care for everybody else.

Republicans are about to take over the House of Representatives and begin their “investigations” into, well, anything that will distract from these terrible statistics. In the meantime, Americans, particularly those in red states and counties, will continue to die at rates considered obscene by the standards of every other developed nation in the world.

Our next chance to put America back on track will be in two years, and we damn well better get ready.

Reprinted from The Hartmann Report with the author’s permission.

Thom Hartmann is a four-time Project Censored-award-winning, New York Times best-selling author of 34 books in print and the #1 progressive talk show host in America for more than a decade.