Katy White of Washington, DC, attends a rally at the Supreme Court on May 3, 2022, after learning that the court may overturn Roe v. Wade. Photo credit: © Allison Bailey/NurPhoto via ZUMA Press
Apprentice Stories Rights & Liberties

A Friendship Born at an Abortion Rights Rally

As teenagers, Kellee Southern and Amy Beumer had very different experiences with the issue of abortion. Southern had to make the difficult decision to terminate a pregnancy when she was 16. At the same age, Beumer marched in Washington, DC, to deny young women the right to make that decision. On Tuesday, the two became friends at a rally for abortion rights in front of the Supreme Court.

Earlier in the day, Southern and Beumer had attended a breast cancer event right next to where the protest was held. Southern is a local DC resident, while Beumer had traveled from Ohio to attend the breast cancer summit. The two women said they crossed paths a few times and then bumped into each other on the way out. They found themselves walking toward the protest and, after acknowledging they were both going, decided to sit together in the shade under a tree while Southern waited for a ride home.

Southern and Beumer ended up chatting for almost two hours and soon discovered that they shared a common bond on a lot of topics, including abortion.

Beumer said she feels differently about abortion today than she did at the age of 16 when she protested against it.

“We need to make our choices for ourselves,” said Beumer, who was raised Catholic and feels she lived a very sheltered life as a child. “Nobody should make that choice. Nobody should be trying to take that away.” 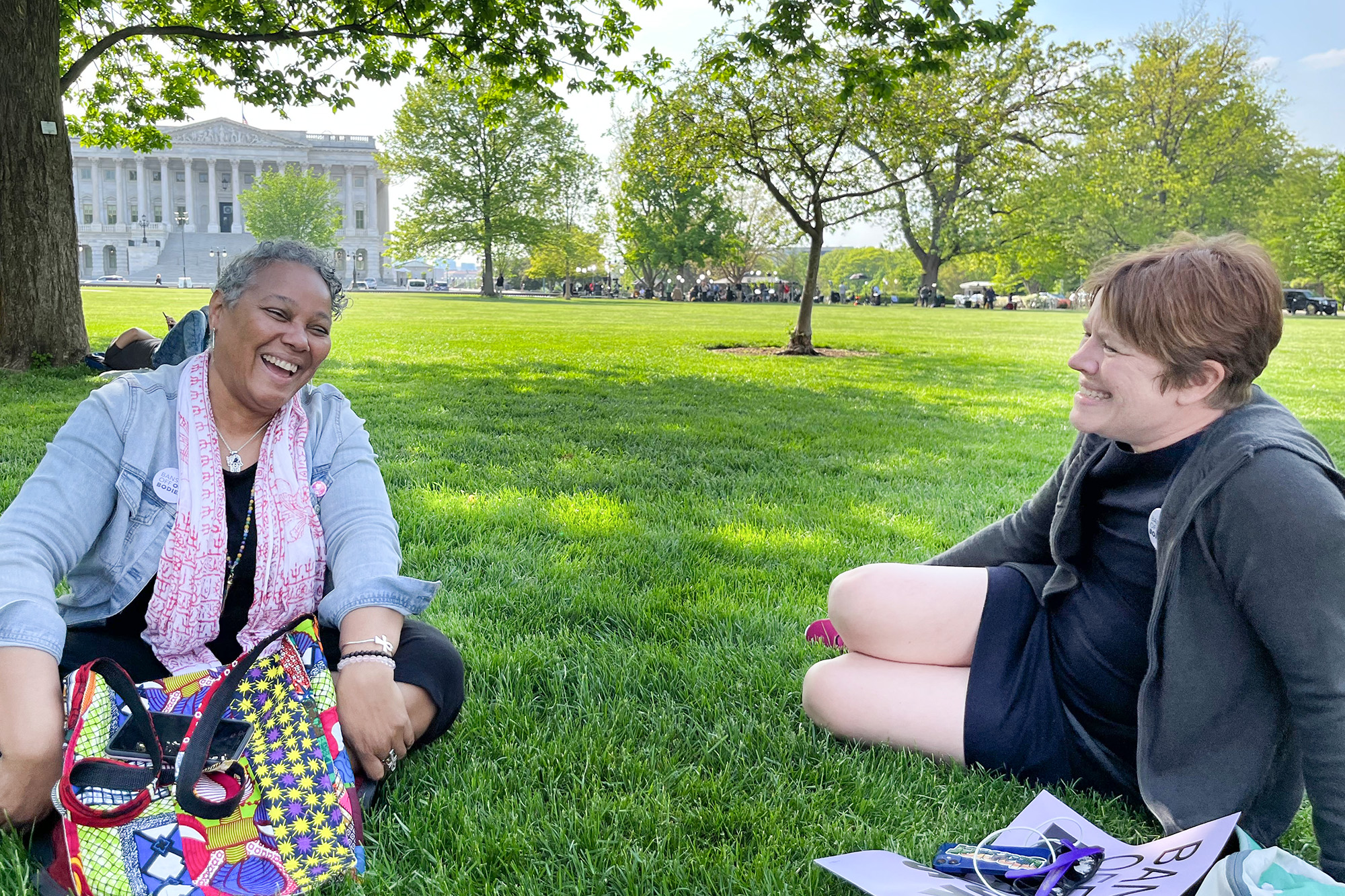 Kellee Southern and Amy Beumer, who are both breast cancer survivors and abortion rights protesters, said they became friends at a Tuesday afternoon rally in Washington, DC, on May 3, 2022. Photo credit: Elise Kline / WhoWhatWhy

Southern’s experience was completely different. At 16, she found out she was pregnant and had to make the incredibly difficult and very emotional decision to have an abortion. She said she still remembers how it felt sitting in the hospital with her mother making that decision.

“We’re talking about something that happened to me over 40 years ago; there’s still an emotional piece even in me just saying it. Like I really haven’t actually talked about it with most people,” Southern said. “But I knew that for me, it was the best decision for me at that point in my life.”

It is a choice she still thinks about.

“Some of my questions with my breast cancer diagnosis, I often wonder if that’s my punishment,” she said.

Hearing Southern say she wonders if her cancer was punishment for having an abortion struck an emotional response in Beumer, who went over to comfort Southern. The two women shared a moment hugging and supporting one another.

Even though it was difficult and painful, Southern said she would not have wanted anyone else to make that decision for her.

On Tuesday, she was one of many women at the protest who had had an abortion.

Afeni Evans, 25, teared up talking about her experience. She said she chose to terminate her pregnancy when she was 22. At that time, she was in a relationship with a man who told her she would be a single parent if she went through with it. Evans said she knew she couldn’t afford to do that, adding that she was also questioning her sexuality at the time.

“I had to make a choice that was right for me, and it was not easy,” she said. 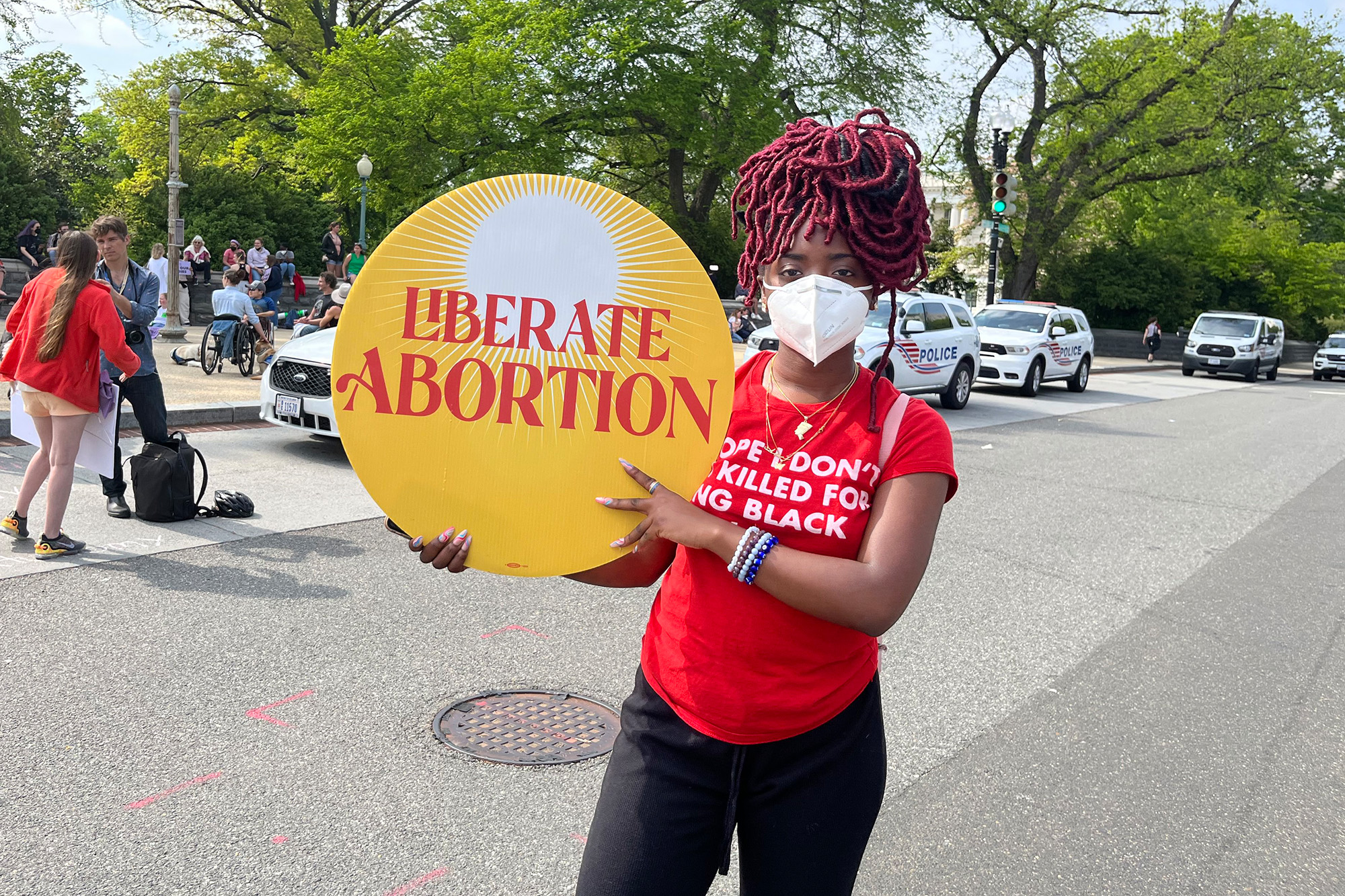 Afeni Evans holding her sign at her second protest in support of Roe v. Wade in 24 hours in Washington, DC, on May 2, 2022. Photo credit: Elise Kline / WhoWhatWhy

Evans explained she had a medical abortion, which induces a miscarriage.

“It was one of the most painful experiences of my entire life,” Evans said.

Evans believes other women face similar anguish when deciding to have an abortion.

“I don’t think there are any women in America that have decided to make these decisions, put their bodies through this trauma, put their minds in this trauma without really thinking about what it means,” Evans said.

If the court ends up overturning Roe v. Wade, it would have an immediate impact on millions of women. According to the Guttmacher Institute, 22 states have laws and constitutional amendments on the books that would allow them to ban, or attempt to ban, abortion as quickly as possible.

The protests first began Monday night after a draft decision that was leaked to Politico indicated there was now a majority for overturning the landmark ruling granting women the right to abortions.

Some protesters stayed all night, and others joined them on Tuesday. However, the atmosphere was very different between the two phases of the protest. Monday, at midnight, some protesters formed an arc standing and sitting on the steps of the Supreme Court. Surrounded by candles placed on the ground, some held hands and others wept while the crowd chanted and sang. Off the right side of the Supreme Court steps, a group of protesters engaged in a scuffle. Anti-abortion protesters said they were hit, that their signs were taken away from them, and one person was tackled to the ground.

Come Tuesday sunrise, the heat and humidity increased, and so did the number of demonstrators. The crowd swelled from hundreds at nightfall to thousands by midmorning. Throughout the day, police continued to put up barricades as more people gathered.

As the temperature rose and protesters sweated in the sweltering heat, they continued to chant, yell, and hold up their signs.

Some demonstrators brought their kids and sought to keep them occupied with fun activities. Amanda Kloer, 39, went to the protest Tuesday with her two daughters, ages four and six. Her little ones drew on the sidewalk with chalk and blew bubbles in the air as Kloer explained to them the importance of the protest.

“I try to teach my girls that they are the boss of their own bodies,” Kloer said. 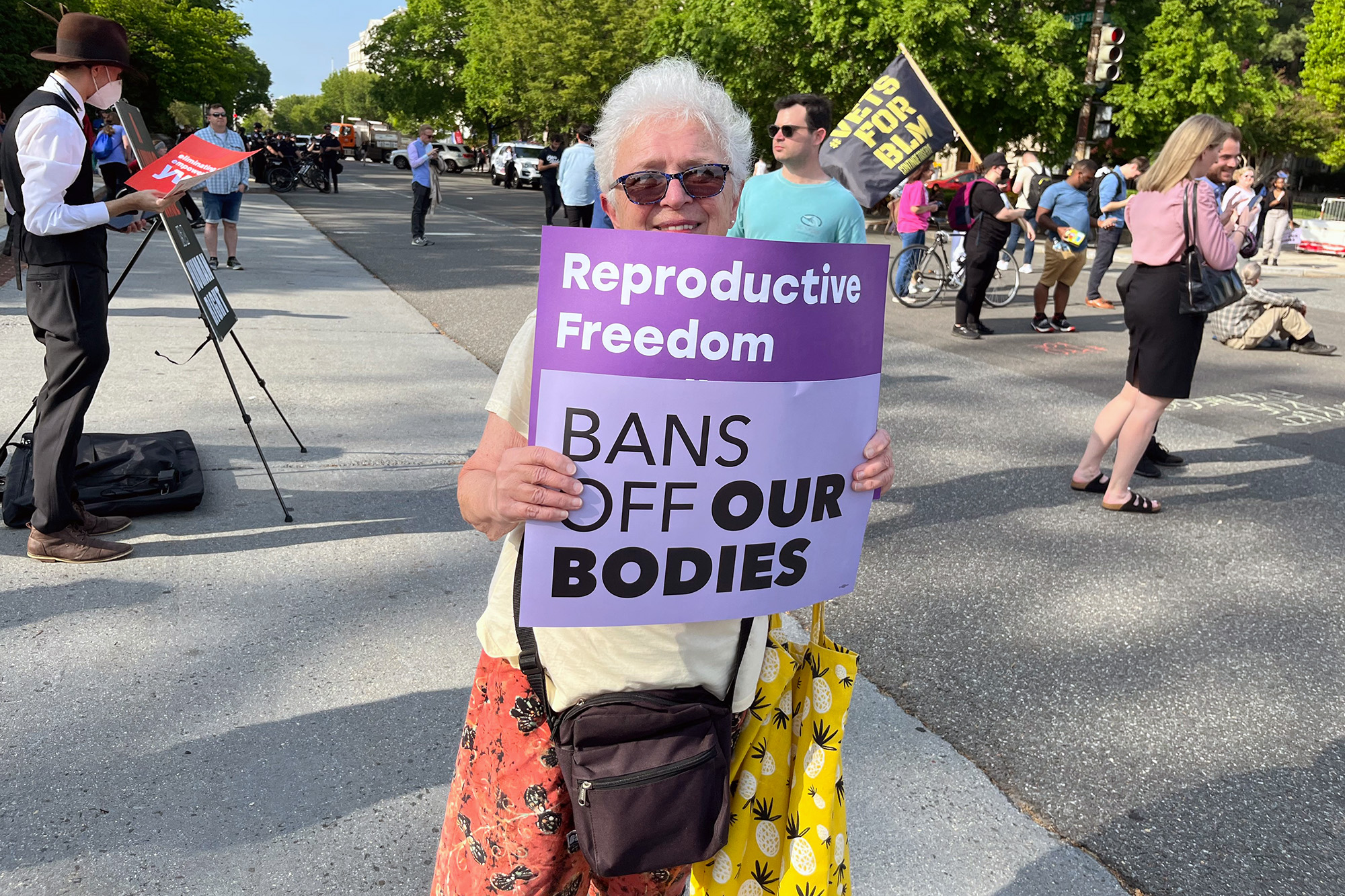 Ingrid Jensen holding her sign in protest in front of the Supreme Court in Washington, DC, on May 3, 2022. Photo credit: Elise Kline / WhoWhatWhy

Other protesters were much older; Ingrid Jensen, 77, said she still remembers how it felt when the ruling for Roe v. Wade was issued in 1973.

“When it first passed, it was a great relief because I felt that women were no longer having to resort to unsafe methods of obtaining an abortion,” Jensen said.

Today, she is shocked and dismayed.

“Women are not going to have freedom without having reproductive freedom,” Jensen added.

Southern and Beumer stayed at the protest until early evening, talking and doing their part to fight for the reproductive rights of a younger generation. They then exchanged phone numbers and went their separate ways, but not before agreeing to stay in touch.

Beumer said she feels lucky to have met Southern, adding that they talked about things at the protest they might not have shared in a different setting, and it was a bonding experience. They live states apart, but Beumer hopes to return to DC someday.

“I know if I get here again, I will be seeing her.”