Police in America: An Awkward Truth

It’s very difficult to talk about this in polite company, or in any company really in most of the nation, but there’s an awkward truth about cops that most people kinda sorta know, but still won’t take to its obvious conclusion.

Generally speaking, the police are a right-wing force in this country. They support right-wing causes individually, they act on behalf of right-wing elements of the society, and frequently stand down when right-wing forces are engaged against left-wing (or merely populist) forces in street battles.

Yes, they solve crimes. Even relatively nonpropagandistic, cop-focused shows like The Wire (which was produced by a police reporter and a veteran detective) show that aspect of their work. (Merely propagandistic shows, on the other hand, like Law & Order, Miami Vice, Hawaii Five-0 and myriad others, exist to only glorify that aspect of the job.)

But police departments were formed not to solve crimes, but to “maintain order” in the immigrant-unrest and labor-resistance world of the 19th and early 20th centuries — a role they inherited from the infamous Pinkertons, thugs-for-hire from an earlier day.

And they have remained a force of social repression — repression of unrest — ever since. (If you click the Pinkertons link above, skip the History Channel’s glorification and read point 8: Pinkertons as “the paramilitary wing of big business”).

Most people fall somewhere on this spectrum in their thinking about cops — that they’re either our crime-solving friends from CSI or they’re somewhat problematic, but still a force for order in a troubled and violent world (The Wire, Hill Street Blues, True Detective).

But what if they’re a force for disorder? What if they’re too closely allied with the right-wing-terror problem the nation is trying, though not hard enough, to fix? What if our police are creating the problem we also want them to solve?

At least four “secret cliques or gangs” of sheriff’s deputies — with names like the Banditos and the Executioners — continue to operate and recruit within the L.A. County Sheriff’s Department, despite recent reforms intended to ban them. The persistence of illicit factions is described in a new report commissioned by L.A. County that rebukes a department that “either can’t or won’t” manage a problem that is undermining the legitimacy of the law enforcement agency, and has cost local taxpayers tens of millions of dollars to settle claims of recklessness, violence, and harassment.

Conducted by the RAND Corporation on behalf of the county government, the report draws on an unprecedented survey of the department’s roughly 10,000 sworn personnel, and reveals that nearly one-in-six deputies have been invited to join a “subgroup” — a quarter of those within the past five years. (The report opts for the neutral language of “subgroups” and “cliques,” but recognizes that critics have long decried these factions as “gangs,” pointing to pervasive initiation rituals, tattoos, hand signs, and the groups’ often violent behavior.)

Entry into these gangs often requires murder. Names like “Executioners” and “Reapers” give the game away.

In Hidden in Plain Sight, [author Michael] German, a Bren­nan Center Fellow and former FBI agent, shows that federal, state, and local governments are doing far too little even when the problem of racist officers within law enforcement — police and sher­iffs’ departments and federal agencies — is well-known. He points to a 2006 intelligence assessment based on FBI investigations and open sources that warned of “white supremacist infiltration of law enforcement … by organized groups and by self-initiated infiltration by law enforcement personnel sympathetic to white supremacist causes.”

What the agent found was lots of cops in the KKK, one of them part a group that was planning a murder:

The FBI first asked Moore to infiltrate a klan group called the United Northern and Southern Knights of the KKK in rural north Florida in 2007. At klan gatherings, Moore noted license plate numbers and other identifying information of suspected law enforcement officers who were members.

Moore said he noted connections between the hate group and law enforcement in Florida and Georgia. He said he came across dozens of police officers, prison guards, sheriff deputies and other law enforcement officers who were involved with the klan and outlaw motorcycle clubs.

While operating inside this first klan group, Moore alerted the feds to a plot to murder a Hispanic truck driver. Then, he says, he pointed the FBI toward a deputy with the Alachua County Sheriff’s Office, Wayne Kerschner, who was a member of the same group. [emphasis added] 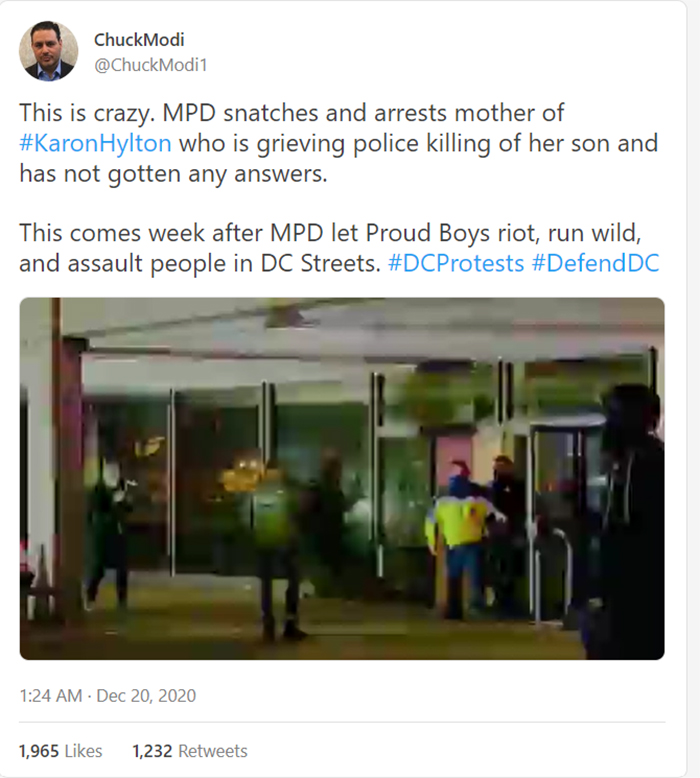 Don’t focus on the first part — “Cops arrest grieving parent” isn’t news. Focus on the second part — “MPD let Proud Boys run wild.” I know many people who personally saw the same in Portland, OR, during that city’s recent “troubles” — cops standing around letting right-wing gangs attack “leftie” protesters. Yet cops have no qualms about laying into the “left” when it pleases them.

That comes from the Cold War-friendly Center for Strategic and International Studies — no doves they. And yet they fear police participation in right-wing terror:

The data indicate that U.S. military personnel have been involved in a growing number of domestic terrorist plots and attacks. The percentage of attacks and plots committed by active-duty and reserve personnel rose in 2020 to 6.4 percent of all attacks and plots (7 of 110 total), up from 1.5 percent in 2019 (1 of 65 total) and none in 2018. Active-duty personnel perpetrated 4.5 percent of the attacks in 2020 (five incidents), and reservists conducted 1.8 percent (two incidents). While these individuals represent a tiny percentage of all current active-duty and reserve personnel, the increased number of incidents is still concerning.[11]  The data also indicate a rise in law enforcement involvement in attacks. The growth is notable since individuals with a military or law enforcement background have skills that extremists want — such as proficiency in firing weapons, building explosive devices, conducting surveillance and reconnaissance, training personnel, practicing operational security, and performing other types of activities. The data should serve as a cautionary tale. While the numbers are relatively low, they are growing — and the military and law enforcement agencies need to take preventive action now. [emphasis added]

And finally, something almost no one will talk about — police participation in the Jan 6 “event”:

Rocky Mount, which is predominantly white and staunchly Republican, was thrust into the national spotlight on Jan. 6 after two of its active police officers were spotted among the crowd rampaging through the halls of Congress.

Jacob Fracker and Thomas Robertson, both military veterans, are among the 17 current or former law enforcement officers charged by federal authorities for alleged participation in the riot, according to an ABC News tally.

As reporter Chuck Modi has written: “The #january6thcommitteehearing can not stop at Trump & neo-Nazis. It must also indict all the complicit cops that enabled it to happen.” Obviously true, if uncovering truth is the goal. Yet given the (sometimes nervous) glorification of police in this country, aided and abetted by the entertainment industry, that’s unlikely to occur.

It’s impossible to determine the degree of police (and ex-military) support with the Jan 6 mob.

One of the few who have tried is the excellent reporter Adele Stan, writing at Right Wing Watch:

In the cases resulting from the Jan. 6 insurrection, some members of law enforcement communities may have escaped scrutiny if they took part in the insurrection, while the scrutiny visited upon others may never be known to the public. For instance, in the wake of the siege, 12 members of the Capitol Police force were put on desk duty while the department investigated whether any had aided the insurrectionists. However, because the Capitol Police are not subject to the Freedom of Information Act, the American people may never know the answer to that question.

Among the more than 500 people charged with federal crimes by the Department of Justice for their participation in the Capitol breach, Right Wing Watch has been able to identify 15 law enforcement officers — some actively employed by law enforcement entities, and some retired — based on local and national news reports and corresponding charging documents. (Table below has been updated to include an additional two since identified by the Washington Post.) They hail from a total of 12 states, and departments as small as the police force of Rocky Mount, Va. (population 4,700) and as large as New York City’s (population 8.2 million). Their crimes range from conspiracy to trespassing, with a number of felonies and misdemeanors in between. [emphasis added]

The article provides a handy table: 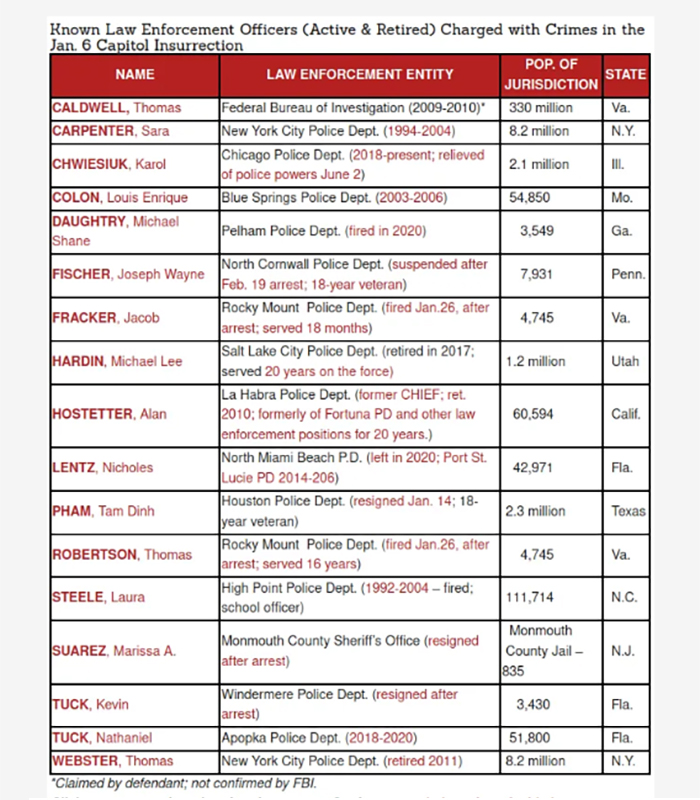 Predictably, the nation’s problematic and often racist police unions are silent on police participation in the riot.

A Nation in Trouble

Where does this leave us? I personally don’t know. What I do know is that most Americans are living in a Happy Days dream, formed in white neighborhoods in the prosperous ’50s, that police do indeed “serve and protect.”

They may do that, but that’s not all they do. To the extent cops enable or join in right-wing violence, to that extent the nation’s in very deep trouble. I frankly don’t know what’s worse — a nation where cops are honored for acts of terror, or one where cops are widely hated for them.