How Effective Are Police?

In a recent piece examining the role of police (“Police in America: An Awkward Truth”), I wrote:

Generally speaking, the police are a right-wing force in this country. They support right-wing causes individually, they act on behalf of right-wing elements of the society, and frequently stand down when right-wing forces are engaged against left-wing (or merely populist) forces in street battles.

Most Americans are living in a Happy Days dream, formed in white neighborhoods in the prosperous ’50s, that police do indeed “serve and protect.”

They may do that, but that’s not all they do.

The assumption was that solving crimes — the police mission that most people would recognize, the one for which they’re defended most by most (unbrutalized) citizens — is itself a positive and mitigating contribution to the health of our society.

Turns out even that mission goes unfulfilled.

A 2020 paper published in the Alabama Law Review and written by Shima Baughman, professor of law at the University of Utah, puts paid to the illusion that cops solve crimes.

TV cops solve crimes. Real cops, not so much.

From the Abstract (emphasis added):

In recent years, the national conversation in criminal justice has centered on police. Are police using excessive force? Should they be monitored more closely? … The implied core question across these national debates is whether police are effective at their jobs. Yet we have not explored how effective police are or determined how best to measure police effectiveness.

This article endeavors to measure how effectively police perform at their core function — solving crime. The metric most commonly used to measure police effectiveness at crime solving is a “clearance rate”: the proportion of reported crimes for which police arrest a person and refer them for prosecution. But clearance rates are inadequate for many reasons, including the fact that they are highly manipulable.

This Article therefore provides a set of new metrics that have never been used systematically to study police effectiveness — referred to as “criminal accountability” metrics. Criminal accountability examines the full course of a crime to determine whether police detect and ultimately resolve committed crime. Taking into account the prevalence and the number of crimes police solve, the proportion of crimes solved in America is dramatically lower than we realize. Only with a clearer conversation, rooted in accurate data about the effectiveness of the American police system, can we attempt a path toward increased criminal accountability and public safety.

She goes on to note that “the scholarly discussion has focused on how police are doing crime solving: With too much force? With the right monitoring? With proper technology? These discussions assume that police are solving crimes. The prior scholarship has also tackled police performance in specific arenas but has not examined how to measure whether police are effective at their jobs.”

The goal of the paper, then, is to answer the question, “What is the best way to determine police effectiveness?”

As the Abstract notes, using “clearance rates” is misleading. Clearance rate is defined as “the proportion of reported crime for which police arrest a person and refer them for prosecution.” Part of the problem with this metric is the amount of data it misses. For example:

How many individuals are victims of a crime but failed to report it to police? How often do police arrest the right people? Which crimes are police most likely to make arrests for? How many police clearances result in a conviction? How many crimes did police not make arrests for but resolved in other ways? None of this information is tracked [by the “clearance rate” metric].

The paper concludes that police, indeed, are remarkably ineffective at solving crime, their supposed primary function.

The Problem with ‘Clearance Rates’

The author notes that a case can be “cleared” even if a suspect is identified and later released as innocent (thus the case is no longer “on the books” even though no further arrest is made), or a suspect is arrested and released due to faulty evidence.

“Clearance rates,” in other words, are a cosmetic metric designed to make police look better than they are, just as today’s employment data is a cosmetic metric designed to make the current administration (whoever that is at that moment) look better than it is. (For example, today’s employment rate excludes from the denominator people who are so discouraged they’ve stopped looking for work.)

Note that clearance rates are also swollen due to another flaw — the percentage of times police arrest the wrong person (because that arrest is easy) and the criminal justice system miscarries and convicts them anyway. In addition, how much criminal activity is missed even in the “known crimes” data?

A police department focused on keeping clearance rates high may not focus on digital crimes that are not tracked nationally.

The database that the author uses includes 50 years of national crime data from a variety of sources, and the statistical challenge was considerable, as a read of the report will show.

The results, however, are worth the effort.

How Effective Are Police Really?

The part of the report dealing with true police effectiveness contains some startling statistics. For example, just on arrest rate:

The image below shows that data in a table: 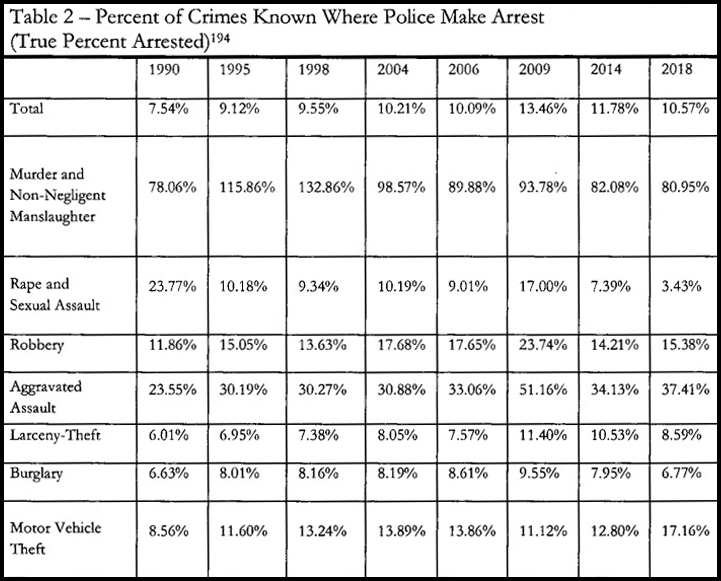 True conviction rates are even worse (these are sample years, not the full data): 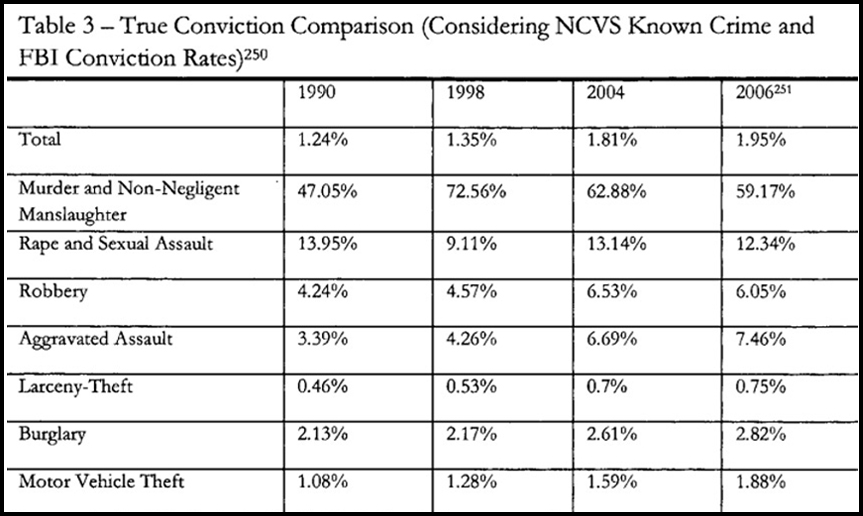 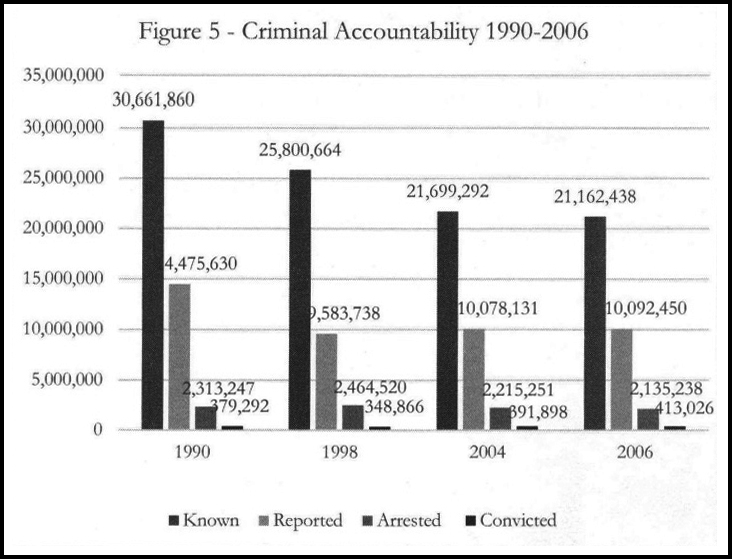 The author acknowledges the problem of including “known” but unreported crimes in these statistics. The causes are, obviously, “a lack of trust [in the police] in their neighborhood” and “an individual’s perception of how police will respond to their report” — rape victims, for example, who fear everything about the way their case will be handled, including by the police.

But that’s the problem, isn’t it? The fact is, the primary mission of the police is not to solve crime — it’s to keep the disorderly, including society’s victims and social enemies, in line or in jail. At that, the police are successful.

How Stable Is the Current Status Quo?

The question is, will that success endure? After all, there’s a point when even the complacent rebel. Our own founding document, the Declaration of Independence, says as much:

Prudence, indeed, will dictate that Governments long established should not be changed for light and transient causes; and accordingly all experience hath shewn, that mankind are more disposed to suffer, while evils are sufferable, than to right themselves by abolishing the forms to which they are accustomed.

Yet “when a long train of abuses and usurpations, pursuing invariably the same Object evinces a design to reduce them under absolute Despotism,” people will rebel.

And when they do, the outcomes are just two: a long period of chaos in which order cannot be maintained, or a crushing response that sees the boots of the state grow heavier still. Or both.

We’re clearly not near that point yet — the George Floyd protests, like others, came and went, with little that counts as improvement in their wake. But just as no empire permanently endures, no system of oppression lasts forever, and these are uncertain times, to say the least.