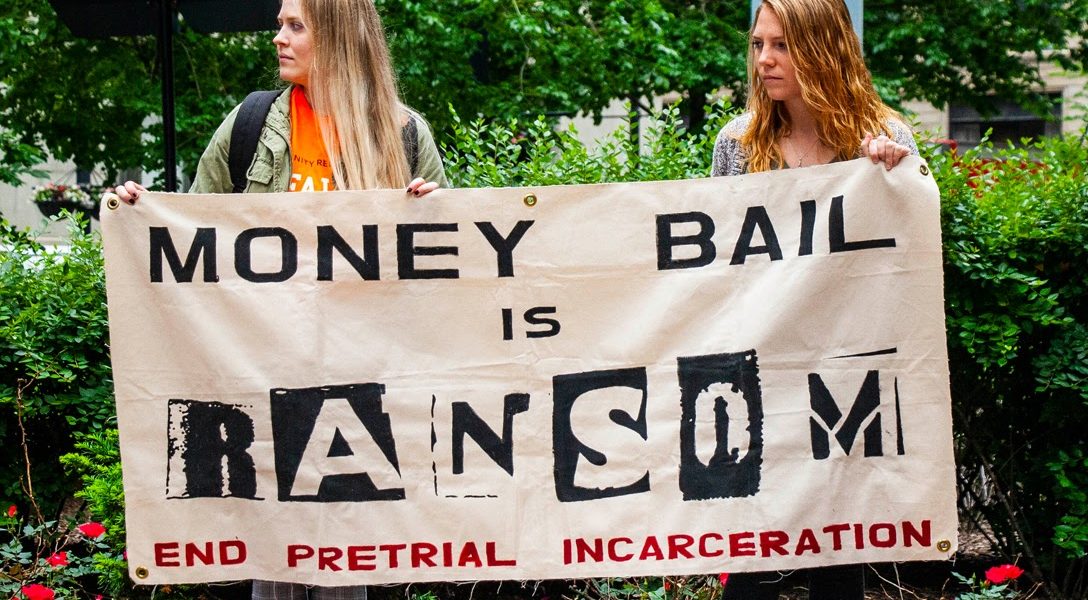 Brock Turner, a 20-year-old white college student, was accused of raping an unconscious woman on the campus of Stanford University.

Kenneth Humphrey, a 64-year-old Black man, was accused of stealing $5 and a bottle of cologne from a neighbor at a San Francisco residential hotel.

Turner, subsequently convicted of three felony charges of sexual assault, was released after paying a $150,000 bail bond. Humphrey, who could not afford his $350,000 bail, had a nearly one-year jail stay.

But in a landmark ruling in January 2018, the California Appeals Court found it was unconstitutional for judges to set bail without considering a person’s ability to pay. At a new bail hearing in May 2018, the court ordered Humphrey’s release on detention at a residential treatment center with a tracking device on his ankle while he awaited trial.

For many, these two cases summarize what is wrong with the cash bail system, a system designed to keep criminal suspects from skipping out. On November 3, California voters will decide whether to keep traditional bail — which dates back to medieval England — or replace it with a “risk assessment” to decide whether suspects can be released before trial.

According to the latest statistics, the median bail in California is $50,000, more than ten times the national average. Even if they hire a bond company to free them, criminal suspects have to pay those firms 10 percent of the bail amount, or an average of $5,000. Either way, if the suspect fails to show up for trial, the money is forfeited and the bail bondsman starts looking for the suspect.

“The wealthy can afford to pay their bail and walk free no matter how serious the crime they are accused of is. On the other hand, you have lower-income people, poor individuals, who have been accused of lower level, non-violent offenses, languishing behind bars for days, months or years,” Jonathan Underland, spokesperson for Yes on Prop 25, told WhoWhatWhy. Yes on Prop 25 is a nonprofit organization sponsoring the California ballot measure to abolish cash bail.

Three out of five people sitting in US jails have been accused but not convicted of a crime, according to estimates, and are awaiting trial. That adds up to roughly half a million people. In California alone, that number is likely near 50,000 people sitting in jail, despite not being convicted, on any given day.

Critics of cash bail cite other examples of the real-life consequences of the system. One person described how his father had to put a lien on his house and his wife depleted her life savings account to come up with the 10 percent for his bail. According to him, it held back his dad’s retirement plan by four years.

Bad credit records, loss of livelihoods, and innocent people pleading guilty to crimes they did not commit because they could not afford bail, are just some of the collateral damage cash bail detractors mention.

The original boost for cash bail repeal came from the California Legislature. After a strong lobbying effort by a broad spectrum of liberal and Democratic groups, the Legislature passed Senate Bill 10, repealing cash bail. Then-Gov. Jerry Brown (D) signed it into law in August 2018.

The heart of the legislation replaced the cash bail system with risk assessment. It would require judges to determine a person’s eligibility for pretrial release based on the individual’s flight risk or threat to public safety, instead of the ability to pay.

Risk assessment involves gathering facts about a person and then creating a profile. Then that individual’s profile is compared to others with similar profiles. An estimate is made based on the likelihood that the individual will miss a court date or be rearrested.

The system would rate detained suspects as either low, medium, or high risks. Suspects rated as both “low risk” of failing to appear and “low risk” to public safety would be released from jail. Those rated a “medium risk” could be released or detained, depending on the local court’s rules. Suspects rated as a “high risk” would be kept in jail with a chance to appeal their case to a judge.

Through the referendum process, California gives voters an opportunity to approve, or overturn, legislation. After the bail reform measure was approved by the Legislature, a broad-based coalition of bail companies, police unions, the NAACP, the Crime Victims of California, and the California Small Business Association formed in opposition. They gathered more than 575,000 signatures of registered voters — well above the 365,880 names required by law — to put the referendum on the ballot this year.

A “yes” vote on Proposition 25 would end cash bail. A “no” vote would uphold the present cash bail system.

Although there is another criminal justice initiative on the ballot this year — adding crimes to the list of violent felonies for which early parole is restricted — so far Proposition 25 has gotten the most media attention.

“You don’t eliminate an industry and expect those people to go down quietly,” David Quintana, a lobbyist for the California Bail Agents Association, said. “Every single weapon in our arsenal will be fired.”

Many opponents of Proposition 25 argue that bail is the most effective tool our criminal justice system has to make sure that people who are accused of a crime show up for court.

“Whether you are a sexual assault survivor or domestic violence survivor, or someone seeking justice from the government, you want your perpetrator to show up in court and can’t get justice unless they do,” a spokesperson for the opposing committee, who refused to be identified by name, told WhoWhatWhy.

Another point of contention between the two sides is the effectiveness of the risk management system.

“Algorithms (data calculations) might be good to recommend books or TV shows to stream, but they have no place in ‘predicting’ criminal behavior and whether someone should go free or stay in jail,” said the No on Prop 25 spokesperson.

But supporters of Proposition 25 point to the 2017 recommendations made by a bail system work group to California’s chief justice. Based on what they saw as successful risk assessment programs in Santa Clara, San Francisco, Ventura, Humboldt, Riverside, Imperial, and Santa Cruz counties, they recommended its expansion statewide.

Opponents counter with their own statistics and studies. The Pretrial Justice Institute, a nonprofit group dedicated towards advancing fair pretrial policies, urged the state of New Jersey to adopt risk assessment in 2014. But after it was implemented, the group reversed itself, stating that while jail populations decreased, risk assessment did not decrease the overall racial disparities for those remaining in prison. They concluded that in some cases, racial disparities increased.

Other policy analysts, while conceding the latter point, note that while thousands of inmates were released from prison, these defendants were no less likely to show up for their court dates than before the state abolished cash bail. In August 2019, California earmarked $75 million to fund 16 pretrial projects in trial courts throughout the state. The projects would expand the use of risk assessment tools in determining the release of pretrial suspects. The success or failure of these pilot projects may have a big impact on the public policy debate.

Several reform groups such as the ACLU and the Human Rights Watch (HRW) after initially favoring Senate Bill 10, came out against it, stating that the risk assessment system had its own shortcomings. HRW endorsed an alternative approach — namely a law setting strict limits on who is eligible to be jailed before they are convicted, mandating release for lower level felonies and misdemeanors.

“People who are accused of low-level felonies and misdemeanor charges, with some exceptions, would not be eligible for pretrial incarceration. Why should someone be placed in jail when they haven’t even been convicted of a crime?” John Raphling, senior researcher at HRW told WhoWhatWhy.

Raphling noted that HRW was part of a broad criminal justice reform coalition that was drafting these proposals into a framework that could be turned into legislation.

Other Points of Contention

Many supporters of Proposition 25 come from the progressive wing of the Democratic Party and that is reflected in the social justice rhetoric of many backers.

“We know that the money bail system does not work mainly because it is powered by a billion-dollar industry with a singular interest in protecting their bottom line,” said Underland.

Opponents dispute the notion that their side is largely a cat’s-paw for the bail industry.

Campaign finance reports filed with the California secretary of state show Yes on Prop 25 raising over $850,000, with $250,000 of that coming from the Service Employees Union. No on Prop 25 raised over $1.1 million, with virtually all of the money raised from bail companies, their employees, or insurance firms that insured bail bonds.

Both sides are similarly poles apart on the impact of abolishing cash bail.

While supporters claim taxpayers could save $5 million a day from warehousing fewer people in jail awaiting trial, opponents come to an entirely different conclusion. They claim it will cost taxpayers hundreds of million of dollars a year to administer a new bureaucracy in addition to clogging up already backlogged courts.

At the national level, the Democratic Party Platform has gone on record supporting the elimination of cash bail. In 2017, Senators Kamala Harris (D-CA) and Rand Paul (R-KY) sponsored legislation providing grant money to states to come up with ways to replace cash bail.

However, opponents of bail reform feel vindicated by events in New York state. In 2019, after bail reform laws passed abolishing cash bail for many misdemeanors and nonviolent crimes, the crime rate spiked. The public blamed these laws for this increase. In 2020, many of the earlier reforms were rolled back.

“Prop 25 is unsafe and is opposed by law enforcement around the state and nearly all statewide crime victims’ groups in California,” said the spokesperson for No on Prop 25.

Nonetheless, the pandemic’s potentially deadly impact on prison crowding has helped renew momentum at the local level for bail reform. A recent study shows that major reforms have been enacted across the country in response to COVID-19.

“What we saw were really unprecedented levels of reform,” said Jim Sawyer, director of the National Association of Pretrial Service Agencies (NAPSA), which conducted the survey.

In 1978, California’s passage of the ballot initiative Proposition 13 jump started the tax-cutting movement at both the federal and state levels. If Proposition 25 is approved, supporters hope that reforming bail in California will launch another national trend.