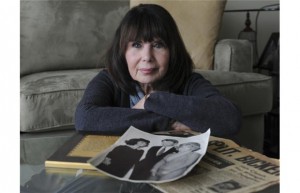 Recently, we wrote about the wrongheaded but endlessly repeated notion that not a single shooting of a major American political figure could have been the result of an organized plot…. because “someone would have talked.” Supposedly, no one credible ever talks.

That is total hogwash, as despite the risks, there has been a steady stream of credible witnesses to conspiracy. But don’t take our word for it.

Meet Nina Rhodes-Hughes. Tell us if she seems like a wacko. Her story is of being just feet away from Bobby Kennedy right as a second shooter pumped the candidate full of lead—from the opposite direction of where Sirhan Sirhan was, and after Sirhan had already been tackled.

It is no coincidence that this “someone who did talk” is living in Canada, and that her account is being provided by a Canadian paper. Imagine the Washington Post or New York Times treating her seriously.

Read all about it here.  To watch an interview with her, click on the image below. Then please come back here afterwards and use the SHARE buttons to tell your friends.