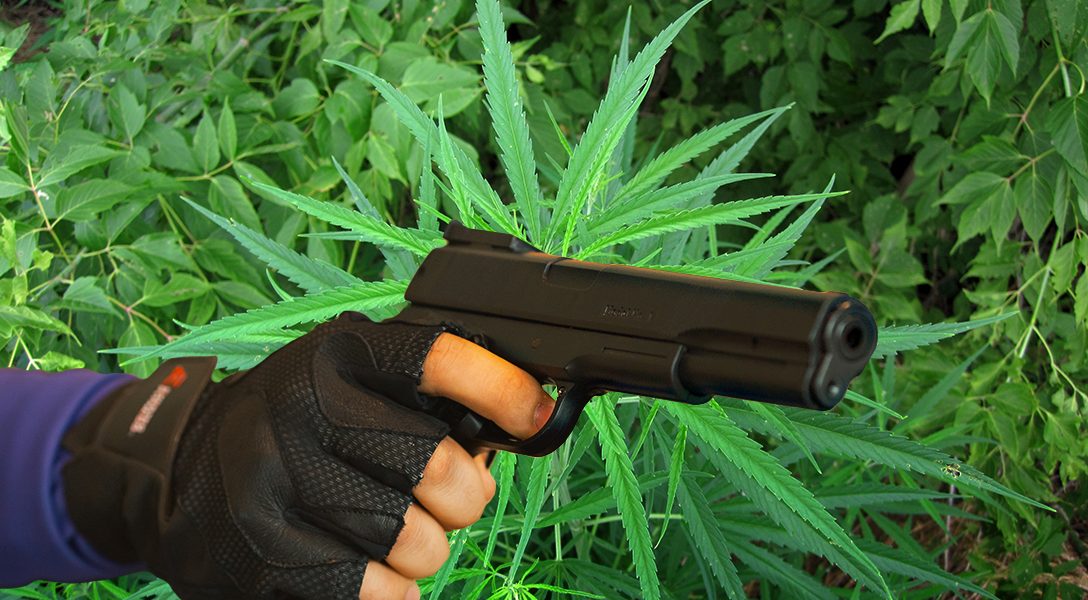 As more states pass laws allowing the use of cannabis for medical and recreational purposes, the potential for legal conflict with the federal government increases as well. Direct conflict between state laws legalizing cannabis and federal law — which puts cannabis in the same category as heroin, cocaine, and amphetamines — is obvious enough. But other possible legal conflicts have also cropped up.

Let’s say you live in a state where cannabis is legal. (These days, that’s a lot of states, since medical cannabis is now legal in 33 states, 10 of which have also legalized it for recreational use.) Let’s say you take advantage of this law and make use of cannabis, whether recreationally or for medical reasons. Then let’s say you decide to buy a gun.

Now you’re facing a dilemma. Because, in order to buy that gun, first you need to fill out Form 4473, the federal background check document issued by the Bureau of Alcohol, Tobacco, Firearms, and Explosives (ATF).

And question 11e on that form asks you to affirm that you are not “an unlawful user of, or addicted to, cannabis or any depressant, stimulant, narcotic drug, or any other controlled substance.”

If the meaning of question 11e isn’t apparent to you, in 2017 the ATF added this explicit clarification: “The use or possession of cannabis remains unlawful under Federal law regardless of whether it has been legalized or decriminalized for medicinal or recreational purposes in the state where you reside.”

Thus, as far as the federal government is concerned, gun ownership and drug use, including state-legal cannabis use, are mutually exclusive.

Cannabis users who choose to ignore the federal stance do so at their peril, because lying on Form 4473 can lead to five years in federal prison.

And because of increasing public support for universal background checks, the likelihood of gun buyers being prosecuted for lying on Form 4473 is increasing. While the probability may be small, it still exists, and not only as an abstraction: Two men in Maine have already been jailed on this charge. One of these men, 50-year-old Richard Quattrone of Augusta, ME, was sentenced on March 25 to an eight-month term in federal prison. ATF agents said that Quattrone, a cannabis user, lied on a federal background check form regarding his cannabis use.

The other man, Donald Henderson, 33, pleaded guilty last year to the same charge, in addition to charges related to his purchase of guns for other people.

Philly Doctor Sues to Have Both Medical Weed and a Gun

One of the most interesting recent cases involves a Philadelphia doctor and medical-cannabis-card holder who last year filed suit against the federal government for his right to purchase a gun while also admitting to cannabis use.

That doctor, 34-year-old Matthew Roman, tried to purchase a five-shot Smith & Wesson 638 revolver. But when the gun dealer asked Roman if he used marijuana, Roman told him the truth: He said yes, and the dealer turned him down.

Roman then decided to sue the federal government, making this case the most direct challenge so far to the underlying federal law, the Gun Control Act of 1968, which prohibits cannabis users from owning guns.

Hawaii: A Call for Confiscation Rescinded

Prior to these cases, Hawaii provided another example of this conflict between gun control and cannabis laws.

In November 2017, just three months after the opening of the state’s first medical cannabis dispensary in Maui, medical-cannabis-card holders in Honolulu began receiving letters from the Honolulu Police Department demanding that they turn over their firearms for confiscation within 30 days. The letters explained that “medical cannabis use disqualifies you from ownership of firearms and ammunition,” and, for legal justification, pointed to a state statute which forbids those who are prohibited from owning guns under federal law from possessing guns in Hawaii.

Confiscation, however, never happened. Public outcry was immediate and loud, and by December 7, 2017, Honolulu police reversed course and publicly announced that the issue would not be pursued further.

An earlier case Oregon ended in victory for legal cannabis users. In this case, four medical-cannabis-card holders were denied concealed-carry permits by local sheriffs. The sheriffs cited the federal Gun Control Act of 1968 for justification — the same law that the ATF had referenced when it formulated the gun background-check question regarding drug use. The case went to the state supreme court in 2011, and the sheriffs lost.

But that court decision does not address the conflict between federal background checks and state cannabis laws. So while it’s now possible for an existing gun owner to obtain a concealed-carry permit in Oregon, it may still be impossible for that same cannabis user to buy a new gun from a federally licensed dealer in that or any other state (assuming, of course, that this person tells the truth on Form 4473).

Another case, in Nevada, went all the way to the Ninth US Circuit Court of Appeals in 2016. In this case, a woman, S. Rowan Wilson, was blocked from purchasing a firearm by a gun dealer who knew she had a medical marijuana card. Wilson argued that while she possessed the card, she did not actually use marijuana.

The appeals courts agreed with a lower court’s decision to throw out Wilson’s lawsuit. The court, while acknowledging that Wilson’s rights may have been infringed, asserted that the federal government was justified in preventing drug users, including marijuana users, from owning guns, because they “are likely … to experience altered or impaired mental states that affect their judgment and that can lead to irrational or unpredictable behavior.”

This ruling, however, was blasted by legal cannabis advocates.

“There is no credible justification for a ‘marijuana exception’ to the US Constitution,” said Paul Armentano, deputy director of the National Organization for the Reform of Marijuana Laws (NORML), in response.

“Responsible adults who use cannabis in a manner that is compliant with the laws of their states ought to receive the same legal rights and protections as do other citizens. It is incumbent that members of Congress act swiftly to amend cannabis’s criminal status in a way that comports with both public and scientific opinion, as well as its rapidly changing legal status under state laws.”

Armentano told WhoWhatWhy that, while cannabis advocates were quite vocal about this issue, gun rights groups were noticeably absent.

“Ironically, ‘guns rights’ advocacy groups like the NRA never seem to go on record commenting about this particular topic,” he said.

The National Rifle Association did not respond to questions seeking comment on this issue.

The Future of Gun Ownership for Legal Cannabis Users

As long as cannabis remains illegal at the federal level, state-legal cannabis users who desire to buy guns will tread shaky legal ground.

Karen O’Keefe, director of state policies for the Marijuana Policy Project (MPP), told WhoWhatWhy that such measures would include amending federal law such that marijuana use would no longer preclude a person from owning a gun, and furthermore that all mention of marijuana on Form 4473 be eliminated. “Marijuana use should of course be legal at the state and federal level for adults, so that a person would not be an unlawful user,” she said. “But in the interim, certainly I think that a person shouldn’t have to give up their gun rights because they use cannabis instead of alcohol or more dangerous prescription drugs.”

Some state and federal legislation has been discussed and advanced, but so far no specific law has been passed at either level that addresses this issue.

The most recent attempt comes from US Rep. Alex Mooney (R-WV), who recently introduced a bill in the House that would create an exception in federal gun laws for legal medical cannabis users.

Another Republican congressman, Thomas Massie of Kentucky, suggested a similar idea last year, but it has not yet been put forward as a bill. His proposal, though, would go further than Mooney’s bill, and cover state-legal recreational use, while also eliminating the entire question regarding drug use on Form 4473.

One other attempt at the federal level went nowhere: In 2016, Sen. Lisa Murkowski (R-AK) made a fuss about the subject, and she sent a letter to then–Attorney General Loretta Lynch citing her concerns.

Lynch, however, took no action. And neither has Jeff Sessions, nor Matthew Whitaker, nor William Barr, who succeeded her as attorney general.

The cause has also been taken up at the state level in Maryland, where state Sen. Michael Hough (R) introduced a bill in 2018 that would prohibit state police from denying gun permits “solely on the basis that the person is authorized to use medical cannabis.” That bill, however, has gone nowhere.