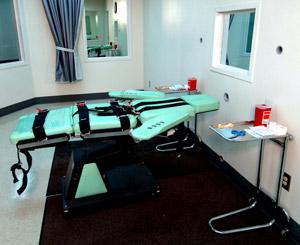 The prosecution is aggressively seeking the death penalty for Tsarnaev. Why?
Photo cred: CA Corrections / Wikimedia

US Attorney Carmen Ortiz has called in reinforcements in an apparent bid to deal a final knockout blow to convicted Boston Marathon bomber Dzhokhar Tsarnaev—and help her execute him. That help comes in the form of a prosecutor who successfully persuaded a Federal jury to impose the death penalty, for the first time in Connecticut in more than 125 years.

Assistant US Attorney Tracy Lee Dayton of Bridgeport, Connecticut, filed a notice of appearance on April 1, 2015—a full week before Tsarnaev was found guilty of all 30 charges in connection with the marathon bombing.

He now faces a sentencing trial beginning April 21, 2015. During those proceedings, the same jury that convicted Tsarnaev will decide whether he will spend the rest of his life in prison, or die by lethal injection.

But the date of Dayton’s appointment shows that prosecutors were merely going through the motions with the Tsarnaev jury, while behind closed doors, they were bolstering their team to maximize the chances he would eventually die.

And the government couldn’t have picked a more formidable foe for Tsarnaev’s defense than Dayton. Her unsparing courtroom style secured the death penalty for Azibo “Dreddy” Aquart, the reputed head of a Connecticut crack ring, who participated in a savage drug-related triple homicide in 2005. Aquart’s three victims, said to be rival dealers, were hog-tied, covered in duct tape, then beaten to death with baseball bats in an apartment where one of the victims lived.

During the penalty phase of Aquart’s 2012 trial, Dayton made repeated graphic references to the brutality of the crimes and the pain suffered by his victims, reminding the jury the victims’ faces “were so pulverized the bones could no longer hold the flesh in place.”

In one telling turn of phrase, she described the scene as a “blood spattered slaughter-house.” Dayton closed her argument while she stood in front of large photos that revealed in exquisite detail the horrific wounds sustained by each of the victims.

The 12 member jury took just one day to determine Aquart should die for his actions and he became the first defendant to be sentenced to death by a Connecticut Federal jury in over a century.

Will Dayton try to pull off the same in Massachusetts, traditionally an anti-death penalty state?

Tsarnaev jurors have already been exposed to gruesome images of the marathon bombing victims, and heard, in imbrued detail, descriptions of the impact the bombs had on victims’ bodies. One wonders what Dayton’s rhetorical flourishes could actually add to a death penalty argument in his case.

By bringing in a ruthless prosecutor with a knack for exploiting gory details, the government is signaling its intention to go all-out for ‘justice,’ which, according to prosecutorial logic, can only result in another death.

But do prosecutors need Tracy Lee Dayton, or do they want her? Why is the Federal government so desperate to execute Dzhokhar Tsarnaev?