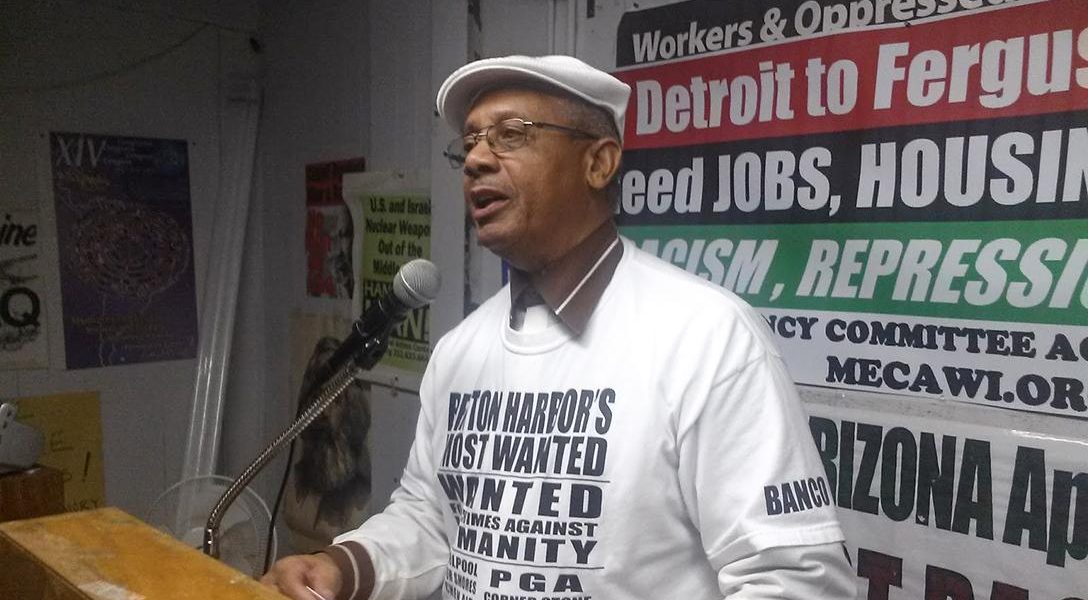 The birthday cards and letters for the Reverend Edward Pinkney’s 68th birthday this month will be opened and searched before reaching him. That is part of the price the political activist is paying for taking on a powerful corporation in Michigan.

Pinkney is currently serving a two-and-a-half to ten-year sentence — of which he has served 22 months already — after being found guilty of changing dates on a recall petition. Pinkney denies that he changed these dates.

He believes that his actual crime was to challenge the Whirlpool Corporation and its political allies in the city of Benton Harbor, Michigan.

Specifically, the activist sought to recall mayor James Hightower over the mayor’s support of a 12-year, $3,871,000 tax abatement for Whirlpool in 2010. Benton Harbor city commissioners used the abatement to induce Whirlpool to build a $68 million corporate campus in the city.

Whirlpool made a $3.8 million donation to Benton Harbor, essentially reducing the tax abatement to $71,000. But for activists like Pinkney, it is unacceptable to allow the Whirlpool Corporation — which recorded $20.9 billion in revenue in 2015 — to skip out on any taxes in one of the poorest cities in Michigan.

The recall petition backfired. Pinkney was charged with election forgery for allegedly changing the dates of signatures to render them valid under state law.

Although the required number of signatures for the recall petition was gathered and a recall date set, Mayor Hightower had the signatures sent to the Michigan State Police Crime Lab, which determined that the dates of some signatures had been surreptitiously changed.

As a result, the recall election was never held, and Pinkney was found guilty of five counts of election forgery.

The activist-minister has been caught up in legal tangles before. Whether calling for the recall of political figures he deems to have racist motivations, or penning inflammatory bible passages that were taken as threats, the 67-year-old has a reputation for contesting what he calls institutionalized racism and unchecked corporate power in Berrien County, Michigan.

What’s new this time is the severity of sentence imposed.

Up until September 7, Pinkney was serving his time in Michigan’s Marquette Branch Prison. However, in an email exchange with WhoWhatWhy, he claimed that he has been unfairly targeted by the prison guards and prison officials due to his status as a political prisoner. (Please see our story on how Chelsea Manning, another political prisoner, is being treated.)

“I have [experienced] numerous attacks by the prison guards. I believe the Director [of the Michigan Department of Corrections], Heidi Washington, who ordered me to Marquette Branch Prison…, was responsible for the attacks on me,” he said.

Pinkney was moved from the Marquette Branch Prison to the West Shoreline Correctional Facility in Muskegon in early September.

Throughout, he has maintained his innocence of the election forgery charge, and is continuing to appeal  his sentence; his most recent petition to overturn the verdict was denied by the Michigan Court of Appeals on July 26.

“I was 100% sure the Court of Appeals would provide justice for me,” Pinkney told WhoWhatWhy. “There was constitutionally insufficient evidence to support a verdict of guilty.

“The criminal justice system is rigged and corrupt from the top to the bottom, the hypocrisy of the system has no limits,” he added. Pinkney’s efforts to secure a presidential pardon suffered a setback recently when the person working on the request fell ill, forcing his supporters to postpone the application indefinitely.

As for local and state elected officials, Pinkney and his supporters have tried without success to enlist the help of of US Representative John Conyers, State Representative Dave Pagel and eight other lawmakers.

While Pinkney does not really expect any support from Michigan elected officials, he noted that Green Party presidential candidate Jill Stein, the American Civil Liberties Union and the National Lawyers Guild have been his vocal supporters.

The ACLU of Michigan filed an amicus brief in November of 2015 stating that Pinkney’s First Amendment rights were violated and that the court allowed testimony which may have distracted the jury.

“I have become the face of resistance to the notion that the working class has no rights that the corporation is bound to respect,”Pinkney said. “I will continue to fight for justice for all at all costs.”