Some names in this story, including that of the author, have been changed.

I found out I was pregnant a matter of weeks before our first lockdown in Britain in March last year. I had tried for a baby for years and, after a divorce and years of fertility treatment, I had given up hope of ever having a child.

That all changed the night I met Ben. Charismatic and good-looking, he told me that he was going through a hard time because his long-term partner had left him, taking their five-year-old son. Like all skilled abusers, Ben was very good at playing the victim and making me feel sorry for him. I fell madly in love with him and became pregnant with our baby daughter within a matter of days.

Although my pregnancy was a shock, I was confident that things would work out for the best. Ben moved in with me in the days before lockdown, and we started to prepare for the birth of our baby.

News of the coronavirus came in steadily at first. At the beginning of March 2020, Prime Minister Boris Johnson had been visiting a hospital shaking hands with coronavirus patients. Just one month later, we watched in horror as he was admitted to an intensive care unit, having caught the dreaded virus.

When writing this article, I was shocked to learn that over the past year, the UK has faced not one but two pandemics. The first, of course, was COVID-19. The second, like the virus, was unrelenting and oftentimes invisible. During the first three months of lockdown in the UK, calls to the National Domestic Abuse Helpline skyrocketed, with a 60 percent increase in inquiries.

As the UK faced the strictest measures Britons had experienced since World War II, those of us living in abusive relationships were not only forced to protect ourselves and our families during a deadly pandemic, we also had to face the horrific realization that we would be imprisoned 24/7 with a violent partner during not one but three national lockdowns.

I also was stunned to learn that violence in the household can escalate during pregnancy. One in four women experience some form of physical, psychological, financial, emotional, or sexual abuse at the hands of their partner while pregnant. This is sometimes due to the abusive partner’s jealousy of the baby or a reaction to the enormous, life-changing experiences that having a child can bring.

“You know, all it would take is one blow to your belly and I could knock that baby right out of your stomach.”

In my case, the abuse started slowly, but it eventually escalated into a torturous experience that left me and my baby daughter fighting for our lives. The guilt I carry with me even now makes me worry that I put my baby in harm’s way, no matter how many times I repeat to myself it wasn’t my fault and that I can’t be responsible for another person’s actions.

Lockdown certainly wasn’t easy for Ben. As a musician, not only had he lost his job, but his industry and income disappeared overnight. Turned away from hospital appointments and banned from the baby scans because of pandemic restrictions, Ben wanted to be part of our birthing journey but felt excluded from any involvement.

Ben’s behavior, however, became increasingly erratic. He would sleep all day and spend the night pacing the house. He would hear voices or think that I was speaking to people who weren’t there. Ben was convinced that people were plotting against him and talked for hours about receiving signals and secret messages through the internet.

While I am in no way trying to excuse or justify his abusive behavior, I am convinced that Ben was facing a mental health crisis. This developed into some seriously controlling behavior. He wouldn’t let me speak to my family and kept me very isolated. He would listen in on my Zoom calls and get angry if I said anything he didn’t agree with. On the rare occasions I was able to go out on my own, Ben would confiscate my phone. When I was six months pregnant, he would accuse me of flirting with other men and would fly into a rage if I took longer than a few minutes to get home.

At this point, the violence escalated. What began as a kick or a push out of nowhere quickly descended into regular, daily bouts of systematic physical and psychological assaults. Ben would repeatedly accuse me of trying to poison or harm him. He would get aggressive if I crossed my legs a certain way, used words he didn’t like, or raised my head to look up at anyone in the street. He would scream at me for hours and hours and hours. Sometimes this would go on through the night and stop me from sleeping, leaving me exhausted and struggling to think straight. 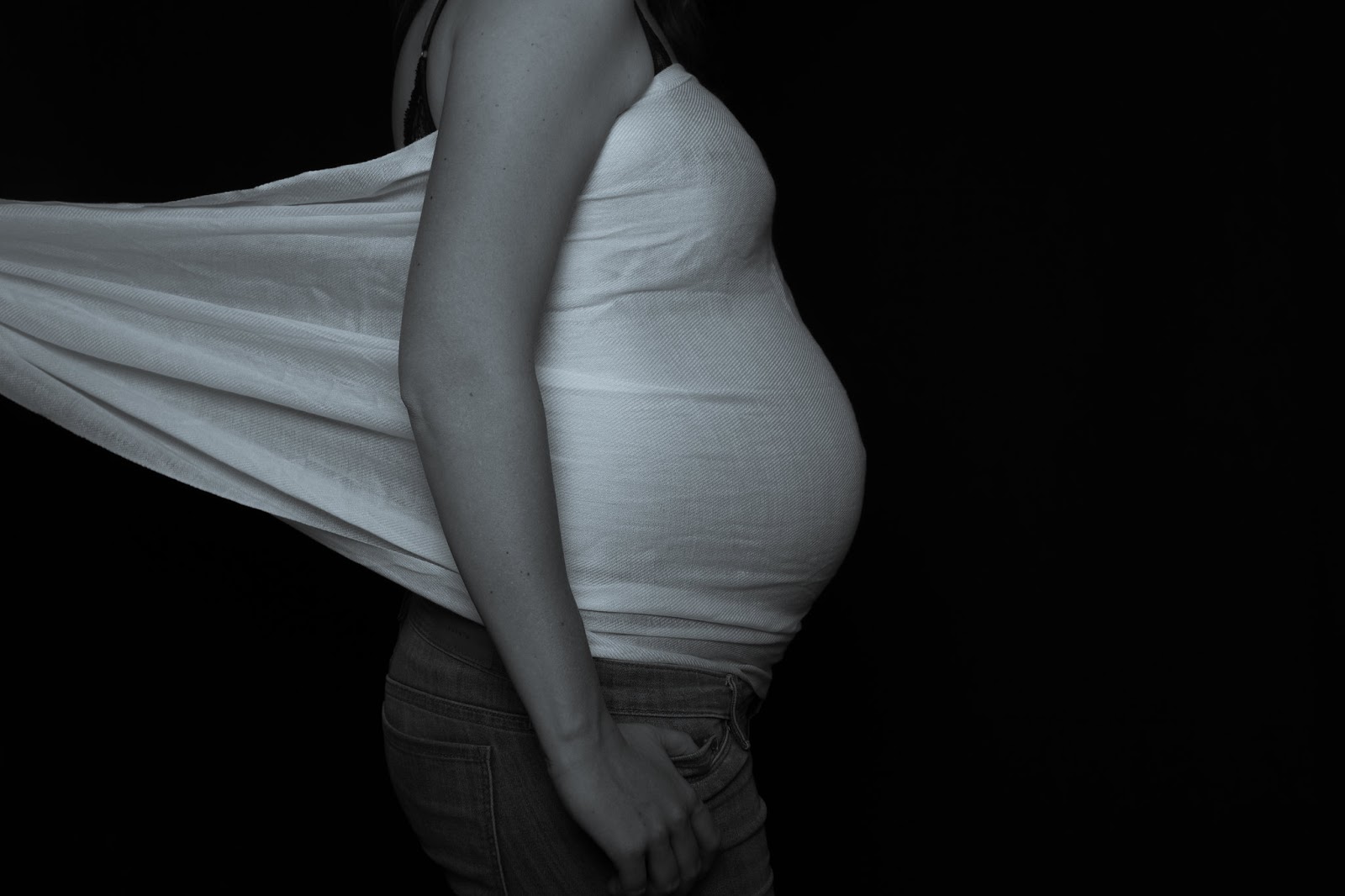 The only times of respite I would get was at my appointments with the midwife. I remember that on three separate occasions she asked me the routine questions of whether there was any domestic violence at home and if I felt safe there. The first two times, I lied. I walked away with a sinking feeling in my stomach knowing that things were seriously not right. The third time she asked, I broke down. I told my midwife how my partner regularly pushed me, kicked me, strangled me, had threatened me with a knife, and hurled objects at my person causing bruising, cuts, and other injuries.

That quickly set in motion a series of events that led me to escape. I knew I wasn’t safe. The morning I left Ben, I was seven months pregnant and woke up to find him looking at me with a smile on his face. He looked at me, then looked down at my belly and said, “You know, all it would take is one blow to your belly and I could knock that baby right out of your stomach.”

Terrified is not the word. The very day that lockdown ended on July 4, I packed my bags and literally ran to the train station. I hadn’t seen my family since Christmas. I arrived on my mother’s doorstep seven months pregnant, hysterical, and covered in bruises. The first thing I did was call Ben’s ex-partner and mother to his son. She confirmed immediately that he had been lying to me. She had escaped, just as I had, with their young son. She had subsequently severed all contact with her ex as he had been making threats to hurt her and the young boy.

Despite the months of abuse, this revelation blindsided me, and I felt my world shatter into a thousand pieces. My mum took me straight to the police where they took photos of the bruises. The police called Ben in for questioning twice. The policeman working on the case admitted that they had been inundated with reports of domestic assault throughout the lockdown, and their caseloads had become unmanageable. Overwhelmed, the police dropped the charges against my ex-partner. I honestly didn’t have any energy left in me to fight their decision.

I gave birth at full term, after having been induced twice and spending three days in labor. I have no idea if what happened next was related to the physical and emotional distress I experienced, but I subsequently suffered a postpartum hemorrhage and was rushed to intensive care with severe sepsis. I spent the next 10 days in the hospital alone, with my beautiful baby daughter to care for. My mother, who had stepped in as my birthing partner, was sent home and wasn’t allowed back into the hospital to see us. On my ward, the patients were told to distance from one another, and the midwives were so overworked that we saw them crying from exhaustion during their shifts.

I remember the sense of rage I felt at seeing Boris Johnson at the birth of his baby son Wilfred. He had only been discharged from the hospital with COVID-19 two weeks beforehand, yet he, unlike so many others, was allowed to be by his wife’s side after she gave birth. In the meantime, women across the UK were forced to either give birth alone or were stopped from sharing in the joy of the first few hours of parenthood with their partners.

The UK has lived through a time of unprecedented crisis during three national lockdowns. Domestic abuse during pregnancy presents a clear risk to both mother and baby and can lead to premature birth, injury, and death. The number of domestic abuse-related prosecutions in England and Wales fell 22 percent last year while reported incidents of violence escalated.

Ben still calls me asking to see our baby daughter. He has yet to be assessed by a doctor as he still doesn’t believe there is anything wrong with him. As a university teacher, I recognize that I am in a privileged position and was able to access the necessary resources and support networks to get myself out of a horrifyingly dangerous situation. While my lockdown experience was a nightmare, I know that sadly there are many women in far, far worse situations than I was with no way out.

Having a lockdown baby was a special but tremendously challenging experience. I was blessed with a beautiful baby daughter whom I cared for and bonded with over the course of six very special months. I did this entirely alone. My daughter is, quite simply, the best gift I could ever have asked for. When she is older, I will remind her that she was born during the Great Global Pandemic of 2020. She was a very special lockdown miracle who, despite all the odds, is growing up to be one hell of an amazing little lady.