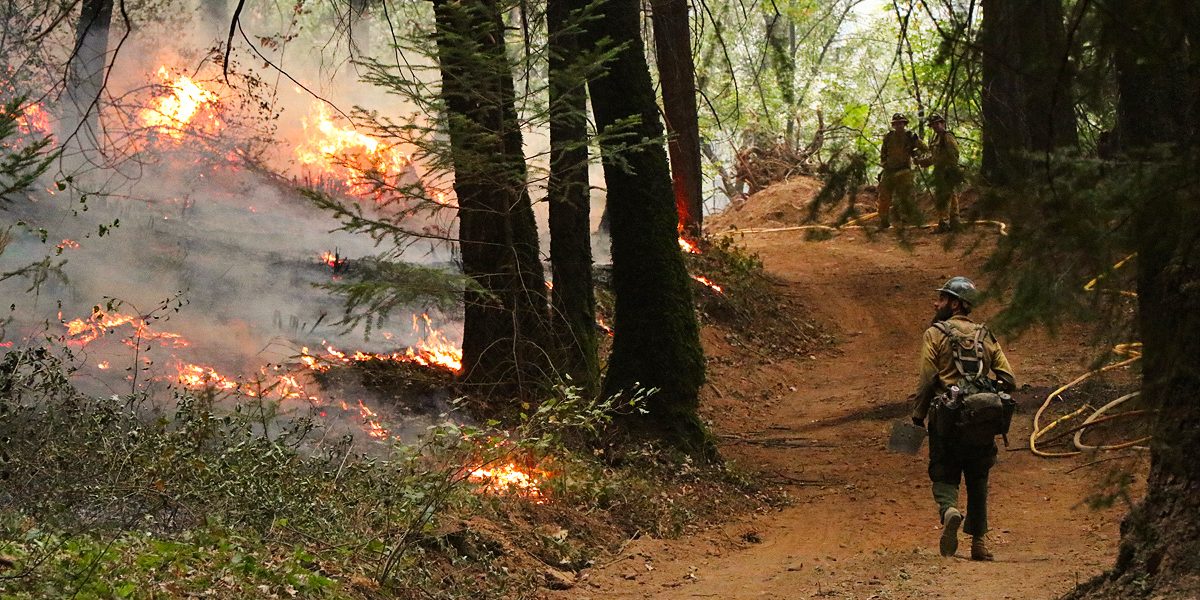 The author writes, ”Zombie forest fires are on the rise. According to a study published Wednesday in the journal Nature, fires in far northern forests that smolder throughout the wet, cold winters and pop up again in the spring could become more common because of climate change. That presents challenges — but also opportunities — for fire management and minimizing the release of greenhouse gases, researchers say.” Photo credit: Pacific Southwest Forest Service, USDA / Flickr (CC BY 2.0)
Editors' Picks

A Prosecutor Says No to a Rape Charge, so a College Student Calls Her Own Grand Jury (Dan)

The author writes, “Madison Smith will be just a few months out of college when her story is heard this fall by a most unusual Kansas grand jury — one she convened. For three years, the local prosecutor has resolutely refused to make her case: that what began as consensual sex in a college dorm room became a rape, and that she was unable to say ‘stop’ because her classmate was strangling her. But Smith invoked a vestige of frontier justice that allows citizens in Kansas to summon a grand jury when they think prosecutors are neglecting to bring charges in a crime. The law, dating to the 1800s, was originally used to go after saloonkeepers when authorities ignored violations of statewide prohibition. The 22-year-old graduate is believed to be the first to convene a citizen grand jury after a prosecutor declined to pursue a sex-crime charge.”

From Modern Farmer: “President Joe Biden has made it a priority to reverse many of the controversial moves made by his predecessor, including at the US Department of Agriculture. But at least one unpopular change at the USDA will remain: the relocation of two of the department’s research agencies from Washington, D.C. to Kansas City, Mo. ‘What we’re trying to do is limit the level of disruption,’ Secretary Tom Vilsack … at an agricultural journalism conference, by way of explaining why the Economic Research Service (ERS) and the National Institute of Food and Agriculture (NIFA) — both of which research threats to the food system, among other pressing topics — will remain headquartered in the Midwest.”

The author writes, “The dusty compound is cluttered with rusted school buses and wooden shacks. Cacti stud the grounds and Christmas lights drape dried tree stumps. When the wind blows over the nearby Salton Sea, wind chimes serenade as Slab City slumbers. This Shangri-La of desert weirdness has for years drawn tourists from around the world. Some would stay in one of the dilapidated RV’s rented out by Rodney ‘Spyder’ Wild. It cost only $30, and guests got breakfast and running water. But even the ‘last free place in America,’ as locals call it, didn’t stand a chance against COVID-19.”

The author writes, “Washington Gov. Jay Inslee [signed a law] mandating that a broad swath of industries essentially eliminate greenhouse gas emissions by 2050. The new standards, the most aggressive in the nation, will go into effect in 2023. The Climate Commitment Act sets a cap on greenhouse gas and creates a market where polluting industries buy and sell credits from the state for every ton of greenhouse gas they emit. Over time the state will reduce the numbers of credits it sells, forcing polluters to adapt or compete for a dwindling number of allowances. Businesses that have to buy and sell in the new marketplace include refineries, manufacturers, and power companies. Agriculture is exempted.”

Israel and the Palestinians: A History of Conflict in 8 Key Episodes (Sean)

From History Extra: “As violence between Israelis and Palestinians escalates, the prospect of lasting peace between Israel and the Palestinians seems as remote now as ever. Writing in 2018, 70 years after the founding of the modern state of Israel, Matthew Hughes charted eight key moments in the history of the hostilities.”

From Eater: “Sometimes a meteorite will reach a velocity fast enough to traverse the vacuum of space, piercing Earth’s atmosphere and giving us a small glimpse of the unfathomably large and chaotic universe just beyond our own world. Similarly but in a virtual world, viral videos of white women making extremely questionable food continue to escape the confines of Facebook and end up on our Twitter, TikTok, and Instagram feeds. These videos all tend to have a similar aesthetic. A beautiful woman in her 30s stands at a counter or a sink or a stove doing something unholy with eggs or a waffle maker or McDonalds hamburgers or, sometimes, a power drill.”