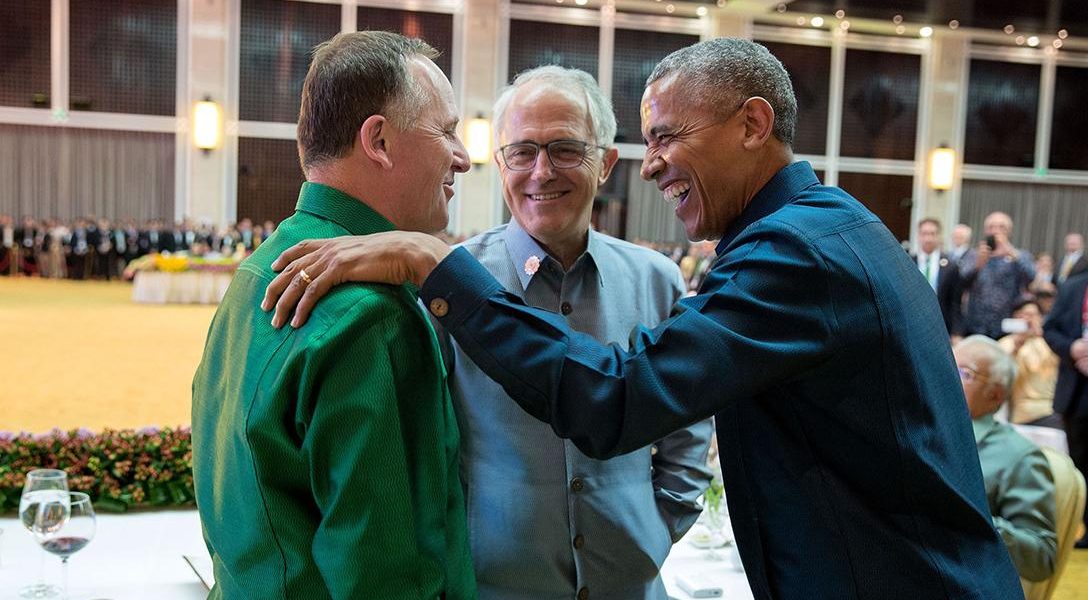 In the News: Barack Obama’s official White House photographer, Pete Souza, has been posting photos to Instagram of the 44th US president that contrast activities with those of his successor, Donald Trump. About this photo: Obama with Prime Minister John Key of New Zealand and Prime Minister Malcolm Turnbull of Australia at the ASEAN gala dinner in September, 2016. Photo credit: Pete Souza / White House
Editors' Picks

Greece: the Low-Noise Collapse of an Entire Country (Jeff C.)

European officials and the IMF have issued a new ultimatum to Prime Minister Alexis Tsipras. He has three weeks to present new austerity measures. Now, officials in the economically exhausted country are openly talking about an inevitable exit from the European Union.

Crown Prince Muhammed bin Nayef was given the George Tenet medal by newly appointed CIA director Mike Pompeo for his work in counter-terrorism.

Peru, Colombia, Brazil and Venezuela are all ensnared in a scandal around Brazilian construction company Odebrecht. There are allegations of bribery, dirty money, and threats against journalists. Truth is more compelling than fiction in this mess.

When Genentech lobbyist Evan Morris shot himself in the head at an exclusive Virginia golf club, it sent shockwaves through Wall Street and K Street.

Vets Lobby for Voting Rights in US Territories (Russ)

Vets from Guam, Puerto Rico, and the Virgin Islands are crowdfunding a campaign to allow territory-based U.S. citizens to vote in Presidential elections.

Why Is the Media Ignoring Leaked US Government Documents About Syria? (Jimmy)

According to Professor Piers Robinson, Chair in Politics, Society and Political Journalism at the University of Sheffield, “We must now seriously entertain the possibility that the war in Syria has involved similar, if not greater, levels of manipulation and propaganda than that which occurred in the case of the 2003 Iraq War”.

Many are cheering the ousting of General Flynn after it was reported he had lied about conversation with Russian counterparts. Will this kill any hopes of better relations with Russia?

Switzerland’s second biggest bank cut 7,200 jobs in 2016 after getting caught misleading investors in the sale of residential mortgage-backed securities. This new wave of cuts for 2017 is just the latest evidence that European banking giants are desperate to “restructure” amid shrinking revenue and rampant investment fraud.