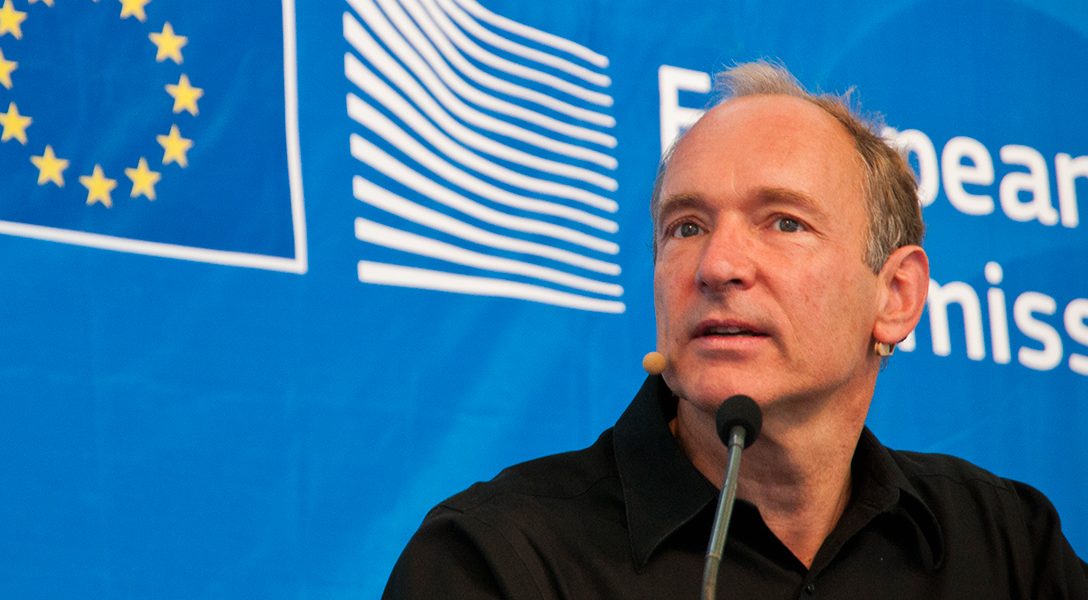 Tim Berners-Lee, the inventor of the World Wide Web, is launching a startup with the mission "to decentralize the web and take back power from the forces that have profited from centralizing it." The goal is to give individuals control of their own data. Developers will build services on the new Solid platform that has the potential to circumvent government spies and corporate overlords. Photo credit: Campus Party Europe in Berlin/ Flickr (CC BY 2.0)
Editors' Picks

Watch Out Facebook, Google, Amazon, and the NSA. Solid Is Coming.

The author writes, “California will attempt to go it alone in regulating internet access after Gov. Jerry Brown signed a bill Sunday to restore Obama-era regulations barring the telecommunications industry from favoring certain websites. First, however, the state will have to prevail in a legal fight with the Trump administration’s Justice Department, which sued to block California from installing its own rules minutes after Brown signed the bill.”

The author writes, “Last month, deep in a 500-page environmental impact statement, the Trump administration made a startling assumption: On its current course, the planet will warm a disastrous seven degrees by the end of this century.”

People everywhere need to pay close attention to this growing technology. “Phone” kiosks that are largely for advertising may even be able to monitor passing mobile phones and harvest their information.

More Democrats Sign On to Stop Yemen War, But Is Enough Being Done? (Jimmy)

From the Real News Network: “With 23 co-sponsors for a new measure that would withdraw US forces from the Saudi-led military campaign in Yemen, Rep. Ro Khanna says that ending the war is ‘now a mainstream position within the Democratic Party.’ Bill co-sponsor Rep. Adam Smith, the ranking Democrat on the House Armed Services committee discusses the measure and whether Democrats are using all levers at their disposal.”

The author writes, “Congress is taking the first steps toward setting national rules governing how companies use consumers data — although one of its goals might be to prevent states from enacting stronger privacy protections of their own.”

Hit Men and Power: South Africa’s Leaders Are Killing One Another (Russ)

The author writes, “Political assassinations are rising sharply in South Africa, threatening the stability of hard-hit parts of the country and imperiling Mr. Mandela’s dream of a unified, democratic nation.”

The author writes, “The Trump administration has completed its plan to roll back major offshore-drilling safety regulations that were put in place after the Deepwater Horizon oil rig disaster in 2010 that killed 11 people and caused the worst oil spill in American history.”