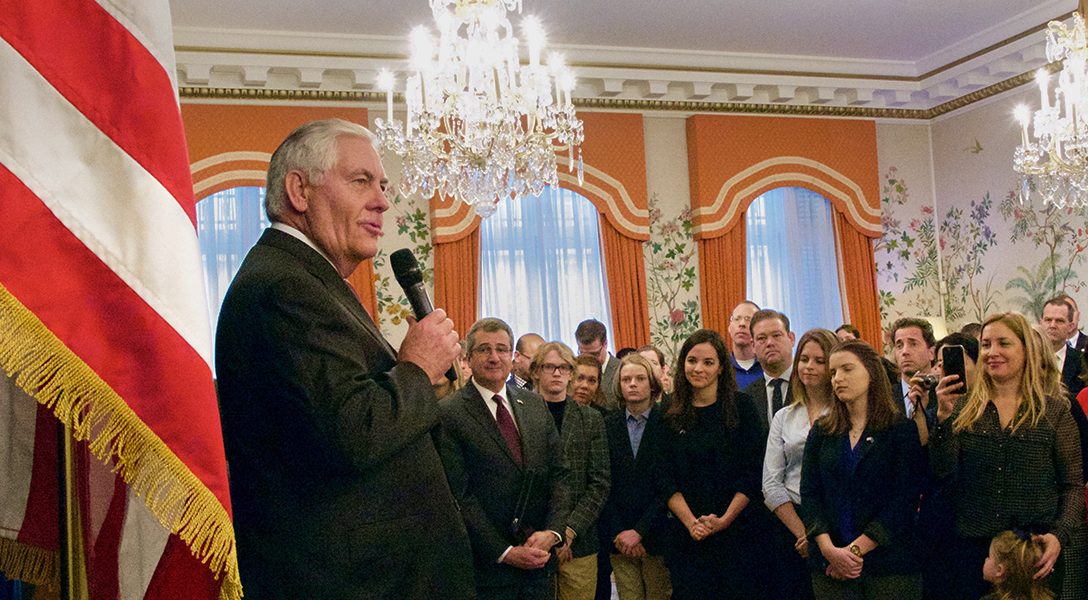 Attrition at State: The US State Department under Rex Tillerson cut foreign affairs specialists by 12% as of September 2017. Much of this reduction was accomplished by not filling vacancies. These are more modest cuts than Tillerson proposed when he took over the department. Photo credit: U.S. Department of State / Flickr
Editors' Picks

22-year-old Arab French singer Mennel Ibtissem left the show after coming under fire for old social media posts supporting Palestine, and criticizing the French government after the Nice and Paris attacks. In a video statement, she called her decision “the condition” of achieving her musical goals rather than the end of her career.

Slightly, anyway. Since his barring from office for a slew of charges, former prime minister Silvio Berlusconi is using various tactics to influence Italy’s upcoming elections. And it appears to be working.

The Deadly Rule of the Oligarchs (Jimmy)

The author writes, “Oligarchs, though they speak of deconstructing the administrative state, actually increase deficits and the size and power of law enforcement and the military to protect their global business interests and ensure domestic social control. The parts of the state that serve the common good wither in the name of deregulation and austerity. The parts that promote the oligarchs’ power expand in the name of national security, economic growth, and law and order.”

News broke yesterday that Israeli police are recommending arrest for the country’s Prime Minister, Benjamin Netanyahu, on fraud, bribery, and general corruption. Israel’s current attorney general, who will pursue the case against the prime minister, was promoted by Netanyahu from relative obscurity to this high post. Despite this connection, other actions by Israel’s AG show that Netanyahu might not have such an easy case.

The author writes, “It seems a pretty squirrely way of admitting that our current system, dominated by for-profit private insurance, does not represent the optimal means of delivering health care. The call to action also implies that the three executives have little faith that the magic of the market on its own will somehow manage to provide insurance so cheap that everyone will be able to afford it whatever their income and medical status.”