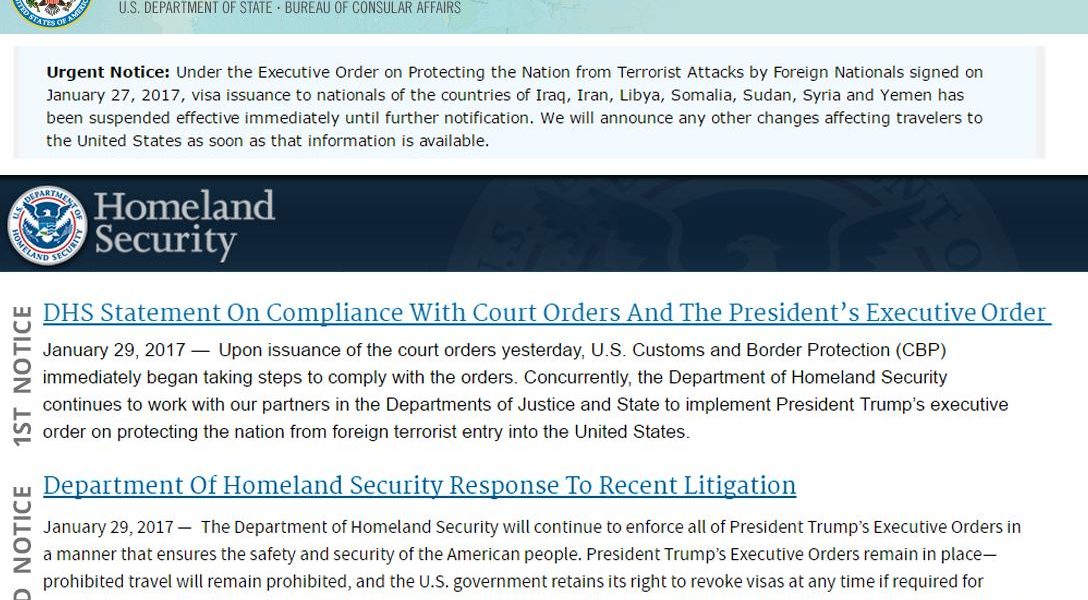 In the News: The Department of State (DoS) and the Department of Homeland Security (DHS) have both issued statements on President Trump's executive order on immigration. The DHS revised their statement after court filings attempting to block the action. Official compliance with court orders has been uneven. Photo credit: DoS, DHS
Editors' Picks

The death of former KGB chief, Oleg Erovinkin, is still fueling global chatter about his possible connections to a dossier about Donald Trump produced by British spy Christopher Steele. Erovinkin was found dead in the back of his car last month, but no cause of death has been released.

Record time to negative approval rating according to Gallup.

A 2011 Trump Hotels’ tweet asking for a favorite travel memory was met with hundreds of replies in response to Trump’s weekend executive order on refugees and immigrants.

The Wikileaks founder, besieged in the Ecuadorian embassy in London for over four years, pledged to be extradited if former President Barack Obama commuted the sentence of whistleblower Bradley Manning. With the condition met, Assange wants certain assurances.

Rex Tillerson’s ExxonMobil lost billions by not complying with Hugo Chavez’s demand in 2007 that foreign oil companies give a greater share of their profits to the government. Could Tillerson’s history and past written statements implying that Venezuela is not a democracy signal a new direction from the State Dept?

Netanyahu: US Embassy ‘Needs’ to Be in Jerusalem (Dan)

Israeli PM Netanyahu and Trump were bosom buddies even before the election. A move of the US embassy into the contested land of Jerusalem would sure please the Israeli PM and Trump, but could set off a firestorm in the Middle East.