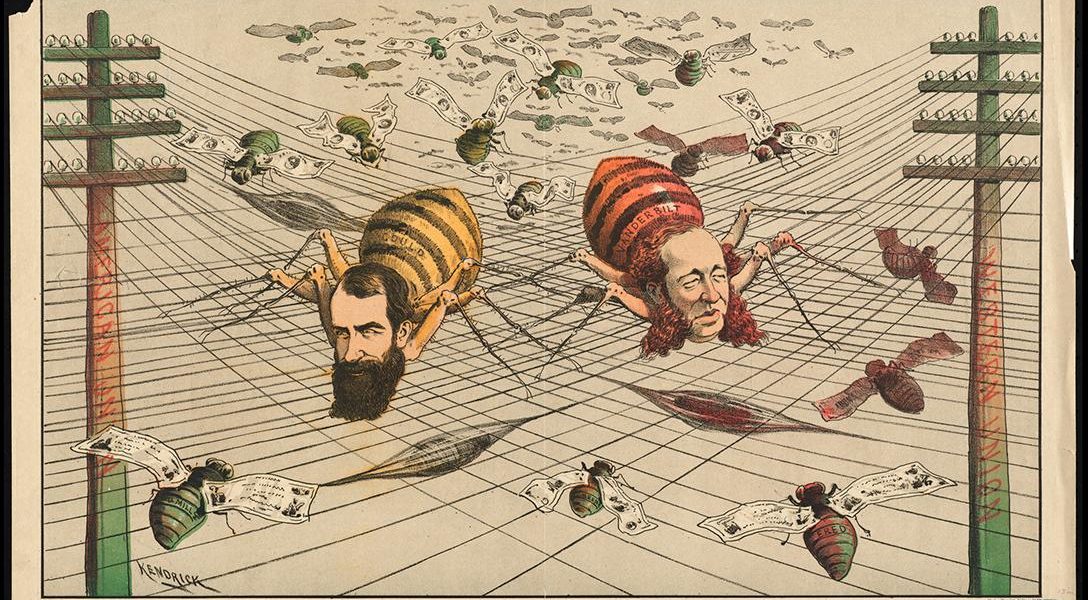 Jay Gould was born on May 27, 1836. Gould was one of the infamous robber barons of the Gilded Age. There have even been songs written about him. This cartoon is a reminder that powerful interests, like Time Warner Cable and Charter, have been trying to consolidate the communications industries since the invention of the telegraph. About this photo: Caricatures of Jay Gould and William Henry Vanderbilt satirizing activities of the American Union Telegraph Company and the Western Union Telegraph Company.  Photo credit: Boston Public Library / Flickr (CC BY 2.0)
Editors' Picks

Chronic pollution from many small oils spills can have a greater impact on seabirds than a single large spill, but offshore oil operators are failing to monitor these effects, despite repeated requests to do so by Environment Canada. Seabirds exposed to even a tiny amount of oil can die of hypothermia in cold water according to researchers.

While still shrinking, supporters of the President point to everything from ‘Congress to Moscow’.

Newly released flight logs show Clinton being on convicted pedophile Jeffrey Epstein’s infamous plane at least 26 times (earlier reports had the number at 11). Five of the flights were without Secret Service detail, yet there is none of the required paperwork for signing them off.

Shareholders Are Upping the Pressure on Oil Companies (Klaus)

Shareholders from small investors to pension funds worth tens of billions of dollars are increasing the pressure on oil companies to act more responsibly. While most of their efforts are expected to be rejected this year, there is an unmistakeable trend that these initiatives are picking up steam and could soon force the oil giants to change their ways.

Rubio Still Not ‘Feeling Pressure’ to Return to Senate (Dan)

Aides say he is seeking a job in the private sector.