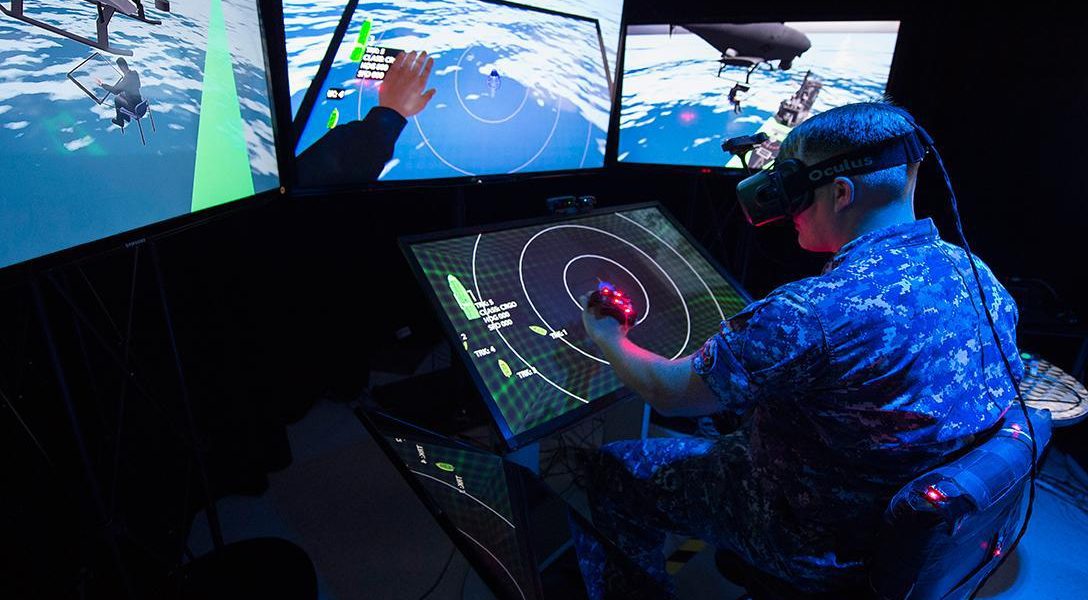 Virtual and augmented realities, swarming attack drones and robotic lifeguards were just a few of the technologies displayed at the 2016 Sea-Air-Space Exposition. This promotional video from DefenseWebTV captures the spirit of the event. Day 1: Distributed Lethality. About this photo: Lt. Jeff Kee explores the Battlespace Exploitation of Mixed Reality (BEMR) Lab. Photo credit: US Navy
Editors' Picks

European Union finance ministers will agree next week to draw up a common list of tax havens and subsequent sanctions against them, according to a draft EU document. The EU’s move follows the Panama Papers leaks in April, which revealed details of corporate and individual tax evasion involving tax havens.

Far Right on the Rise Throughout Europe (Russ)

It’s not just Austria. It’s Germany. And Sweden. And Norway. And Netherlands. And….

Obama has acknowledged the futility of simply killing heads of terrorist groups, referring to the process as ‘whack-a-mole’. So the recent drone strike in Pakistan killing the leader of the Afghan Taliban Mullah Akhtar Muhammad Mansour is meant to send a message to the country where the killing occurred. Namely: the US does not have to notify Pakistani authorities even if their airspaced is breached. This comes after US leaders privately believe that Pakistan was holding Bin Laden despite being a US ally.

Read an excerpt of Mark Hertsgaard’s new book revealing the speciousness of the argument that Snowden or other whistle-blowers can follow protocols without being destroyed professionally, personally, or financially. Hertsgaard highlights extended interviews with another NSA whistleblower, John Crane. For the first time publicly he reveals wrongdoing by the NSA’s and DoJ’s railroading of former NSA official and whistleblower Thomas Drake.

The Center for Medical Progress smear campaign is not the first time anti-abortion activists have teamed with Republicans to discredit fetal tissue research.

Scientists: 2016 Likely to be Hottest Year Ever (Jeff C.)

On the heels of two record-setting years for global heat, 2016 is likely to set a new high for the planet in modern times, US scientists said late last week. Experts revealed their predictions a day after the National Oceanic and Atmospheric Administration announced that a new global heat record had been set in April for the 12th consecutive month.

Anyone following this story knows that suspended (and likely-to-be impeached) Brazilian president Dilma Rousseff is not the only corrupt figure in the government. However now it has come to light that the revolt against her was to divert attention from another scandal.

She vetoed a bill from Oklahoma Republicans mandating jail time for anyone performing an abortion. Says it’s unconstitutional, and her usual allies call her a “Jezebel.”

Hospitals: Supposed Places of Safety during War, But Not in the Mideast (Trevin)

The symbol of the Red Cross has become a deadly target instead of the intended meaning of “protection and safety.” Syria, Russia, and even the US have been accused of attacking Middle East hospitals in recent years, despite the Geneva Conventions which state they are “off limits.”

A youth pastor from a Tennessee Baptist church was one of 32 individuals ensnared in a prostitution sting. A second pastor also offered to pay for sex with a minor, meaning that in this particular operation, 6% of the people soliciting an underage prostitutes were men of the cloth.