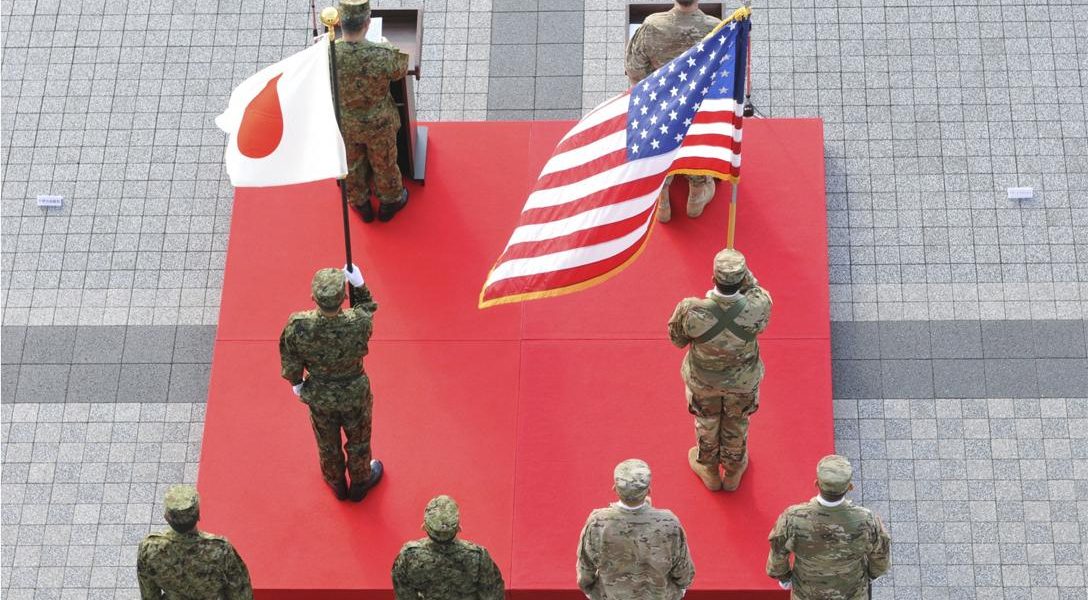 Japan has reasserted its option to use of force as means of settling international disputes. This is a reversal of WWII-area prohibitions on military force. Laws, taking effect today, permit the military forces of Japan to be deployed in the defense of close allies under attack. These security laws were opposed by the majority of Japanese.   About this photo: Lt. Gen. Junji Suzuki, left, commander of the Japan Ground Self Defense Force Middle Army, and Lt. Gen. Stephen Lanza, right, I Corps commanding general, give their opening statements at the Exercise Yama Sakura 69 opening ceremony at the Middle Army headquarters on Camp Itami, Japan, Dec. 5, 2015. Photo Credit: Sgt. 1st Class Sadie Routzahn / US Army
Editors' Picks

On March 28, the National Snow and Ice Data Center made a grim announcement: “The ice at the top of the world has set a new wintertime low for the second straight year.”  To help you picture the loss, the scientists say it is “1.12 million square kilometers smaller than the 1981 to 2010 average, a size difference that’s bigger than California and Texas combined.”

1M Gmail Accounts Might Have Been Targeted by Government Hackers (Trevin)

Google says it warns users who have been targeted by placing a pink warning tab at the top of Gmail, and in the future will provide instructions about how users can better protect themselves.

Sympathy for Stalin Among Russians is High, Poll Shows (Milicent)

According to a poll taken in March by the Levada-Center, 54% of Russians described their attitude toward Stalin as “positive,” while acknowledging that he ordered the death of millions of innocent people. In a December poll, 20% said “Stalin was a wise leader who made the Soviet Union a powerful and prosperous nation.”

Emails released from the Taxi and Limousine Commission (via a FOIA request) shed some light on New York City ‘Cop Cab’ rumors.

The Secret Service said guns will not be allowed at the Republican convention site in Cleveland. In order to highlight the ridiculousness of the assertion that “good guys with guns” would make places safer, gun control supporters had lobbied to allow delegates and visitors to open carry weapons in Cleveland.

At a gallery in Belgium, an artist’s “Jaywalking” installation displays, in real time, webcam footage of jaywalkers in places as far away as, for example, Seattle.  And the artist, Dries Depoorter, gives you the choice of doing something about it, or not. If you’re feeling mean, you can channel your inner cop: Just press a red button and a screenshot of the evil-doer will be quickly emailed to the local police. There’s much more to the exhibit, of course.