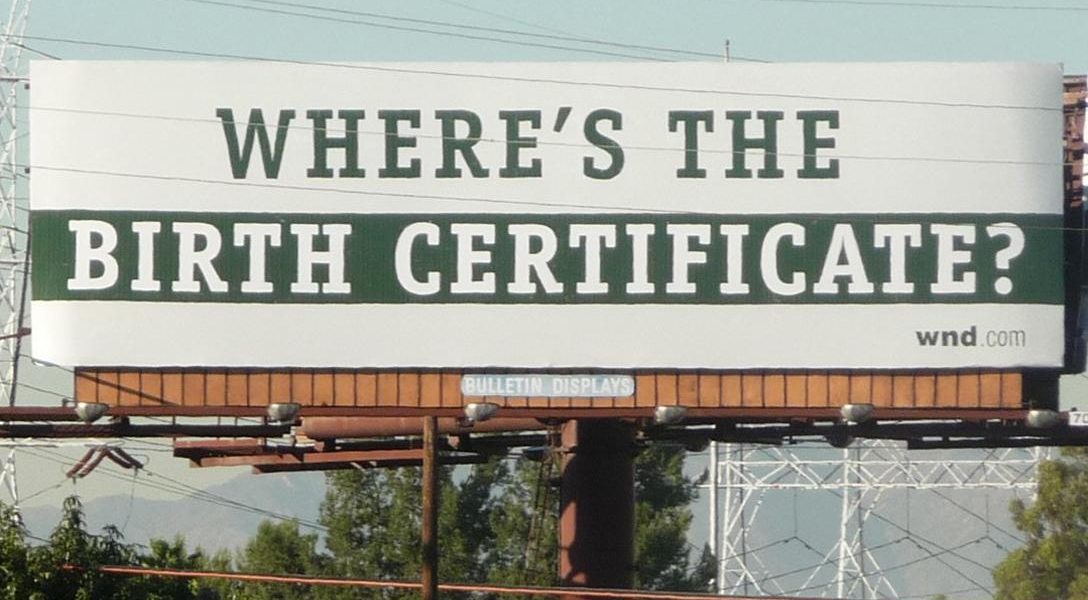 In March of 2011, Donald Trump was testing the waters for a possible presidential run. He was getting media attention by speculating on the authenticity of President Barack Obama's birth certificate. Watch this clip from ABC to hear what he had to say.  About this photo: Billboard Challenging the validity of Barack Obama's Birth Certificate   Photo Credit: Victor Victoria / Wikimedia
Editors' Picks

Apparently, a relatively successful and popular government is a problem for Republicans. Therefore, a group funded by the Koch brother network is trying to take down the VA.

Former NASA scientist, and expert on glaciers, warns that we need to wise up about the quickening pace of Climate Change and the consequences of a rising sea. We’ve been warned. Again and again.

The ruling, rejected as “ridiculous” by Iran, claims that the Islamic Republic failed to prove it wasn’t involved in the 9/11 attacks.

The Cost of 5 Years of Conflict in Syria (Trevin)

Much Emphasis on Hillary’s Libya Disaster, But Don’t Forget About Haiti (Dan)

While not teeming with terrorists like Libya, Haiti is definitely not on the upswing. This result comes despite billions of American aid poured into the country, a priority directive of then Secretary of State Hillary Clinton. Worse, US-backed president Michel Martelly recently left office without appointing a successor. Clinton’s complicity in Haiti’s political situation — ‘You do great elections’, Clinton aide Cheryl Mills mentioned to Clinton in an email after Martelly’s win — is poised to become a talking point if she wins the nomination.