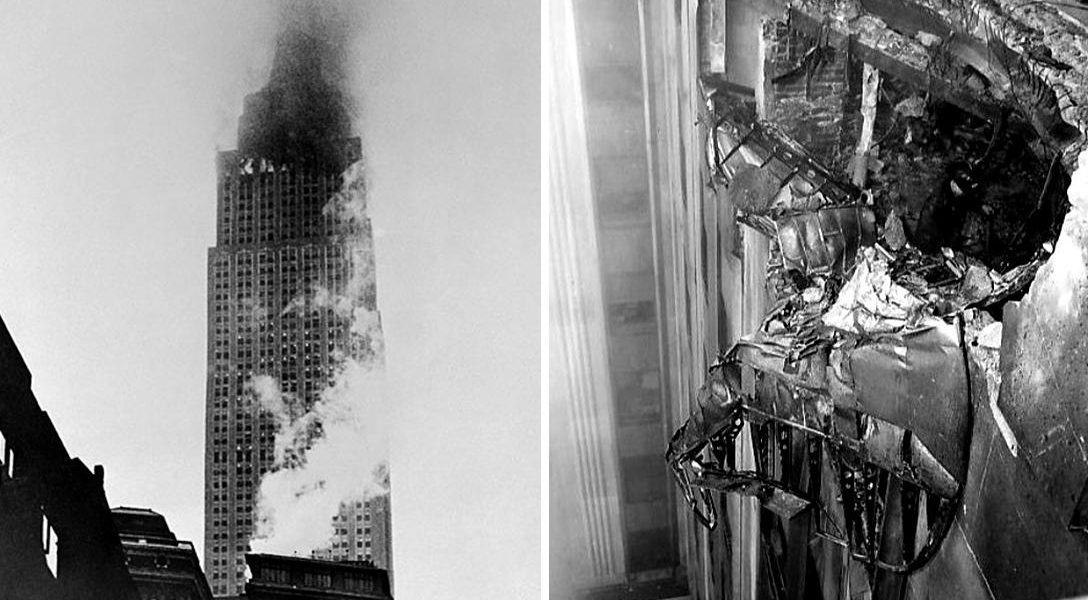 On Saturday July 28, 1945 a U.S. Army B-25 bomber crashes into the 79th floor of the Empire State Building killing 14 and injuring 26. Despite the damage and loss of life, the building was open for business on many floors on the following Monday. The B-25 crash served as motivation for the designers to consider accidental impact of larger planes (Boeing 707) into one of the twin towers at the WTC.   About this photo: The building after the crash (left), point where the B25 impact the building (right).  Photo credit: Bettman Archives / Wikimedia and Acme Newspictures / Wikimedia
Editors' Picks

How Bad Was Media Coverage of the GOP Convention? (Russ)

Very bad, says this essayist. He argues that media totally failed at its job to show skepticism, and avoided meaningful analysis in favor of letting partisan spinmeisters do their thing.

Study Shows 55,400 People Hospitalized or Killed by US Cops in a Single Year (Reader Pat)

New research shows that in 2012 alone an estimated 55,400 people were killed or fatally injured during traffic stops by police. An average of 1 in 291 stops or arrests led to hospital treated injuries or death. Police brutality? What police brutality?

Indonesia to Execute 14 Drug Convicts This Week, Most Are Foreign Citizens (Trevin)

Leon Panetta’s speech was interrupted twice by Oregon protesters yelling, ‘No More War.’ The protests, in turn, were interrupted by counter shouts of ‘USA’. The ‘USA’ chant was also used against anti-Trump voters at the RNC.

Here it comes — the gloves are off for Third Party candidates in what could be a close election.

Deaths due to red-light-running accidents up nearly a third in cities where the cameras are eliminated.

The map, perhaps most tellingly, lists ten predominantly East African countries as those which Jerusalem has “recently developed/upgraded” relations — making the map look strikingly like a return to Israel’s founding “Periphery Doctrine,” which supersedes peace with its Arab neighbors in favor of those on the periphery.