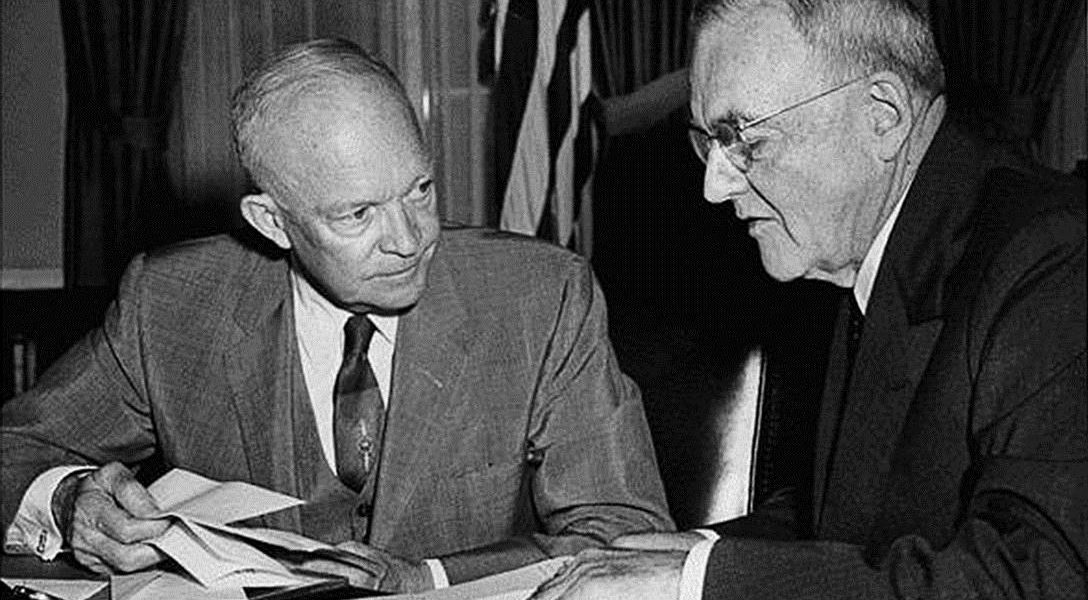 On July 26, 1957 Carlos Castillo Armas, a Guatemalan military officer who seized power in a United States-orchestrated coup in 1954, is assassinated. Eisenhower authorized the CIA to carry out Operation PBSUCCESS in August 1953. About this photo: US President Dwight D. Eisenhower meets with Secretary of State John Foster Dulles, an advocate of the 1954 Guatemalan coup d'état that installed the Armas dictatorship.  Photo credit: Public Domain / Wikimedia
Editors' Picks

Why Do People Hate Hillary So Much? (Russ)

According to this article, the reason people hated Hillary in the 90s (seen as too rigidly ideological) is almost the exact opposite of now (seen as too pragmatic and inclined to compromise.)

Why Terrorism Thrives — and What Could Actually Stop It (Gray)

This essayist reminds us of the human toll already inflicted before people turn to desperate measures, and that our society contributes to those abysmal conditions.

Silver’s “now-cast” forecasts that if the election were held today, Trump would take the swing states of Florida, Pennsylvania, Ohio, North Carolina, Iowa, Nevada, and New Hampshire — contributing to a total of 285 electoral votes to Clinton’s 252.6.

Nice Attacker Was No Muslim (Dan)

Mohamed Bouhlel “danced, smoked, and ate pork. It was almost as though he wasn’t even Muslim”, said his brother. And those are not the only diversions from his religion. This article detailing the Nice attacker’s life not only counters the mainstream narrative, it also illustrates how most ‘Islamic State soldiers’ are nothing but alienated and medicated people.

Simone Zimmerman, the Jewish outreach coordinator fired after 5 days by the Bernie Sanders campaign over her public criticism of Israeli prime minister Netanyahu, speaks to +972magazine about young diaspora Jews’ dramatic shifts on the issue of the Israeli occupation and an intensifying pushback from the US Israel lobby and establishment.