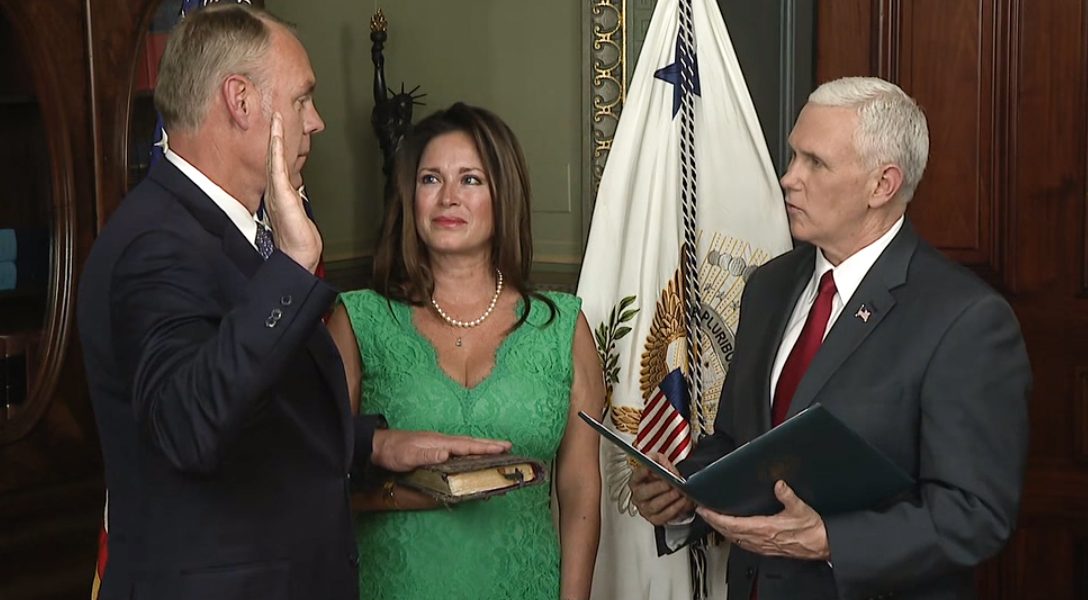 Appearance of Impropriety: This extensive investigative report explores the financial relationship between Interior Secretary Ryan Zinke, his wife Lola, and David Lesar, the chairman of energy-services giant Halliburton Services. It is the second ethics story originating in a nexus between the Trump administration and Whitefish, Montana. Photo credit: The White House / YouTube
Editors' Picks

This scathing investigative story tells a tale of abuse and harassment. But the immigrants in this story are not the perpetrators; they are the victims. Their children were trapped in a dysfunctional care system that funnels billions of dollars to contractors with a record of health and safety violations of the children in their care.

The author writes, “The AP first asked the Pentagon about grave rights abuses committed by the UAE one year ago. But despite well-documented reports of torture reported by the AP, human rights groups, and even the United Nations, Marine Maj. Adrian Rankine-Galloway, a Pentagon spokesman, said the US has seen no evidence of detainee abuse in Yemen.”

Separating Migrant Families Is Barbaric. It’s Also What the US Has Been Doing to People of Color for Hundreds of Years (Reader Luke)

The author writes, “What’s happening right now in our country is, without question, a human rights catastrophe. Yet every deeply entrenched mechanism used in these policies and the spirit fueling this catastrophe are as American as Facebook and Disneyland.”

Over the weekend, President Donald Trump nominated Kathy Kraninger to run the Consumer Financial Protection Bureau (CFPB). Consumer advocates already were wary of Kraninger because of her lack of financial regulatory experience and her endorsement by Mick Mulvaney, who has made clear his disdain for the CFPB. But it is Kraninger’s current job, and her role in the government’s decision to separate families seeking asylum, that is adding to the controversy.

Can You Think of Any Other Ways to Spend $716 Billion? (Jimmy)

The author writes, “Earlier this week, the Senate quietly passed the $716 billion ‘John S. McCain National Defense Authorization Act for Fiscal Year 2019.’ The bill, which passed 85-10 in a massive show of bipartisan support, represents a considerable boost in defense spending across the board — roughly $82 billion just for next year.”

The author writes, “Is it the first time in history Democrats have dropped below 50 percent? That’s hard to say. Voter registration statistics on the State Board of Elections’ website go back to 1982. Anything before that would require a lengthy exploration of paper records. But given Kentucky’s political history, it is most likely true.”