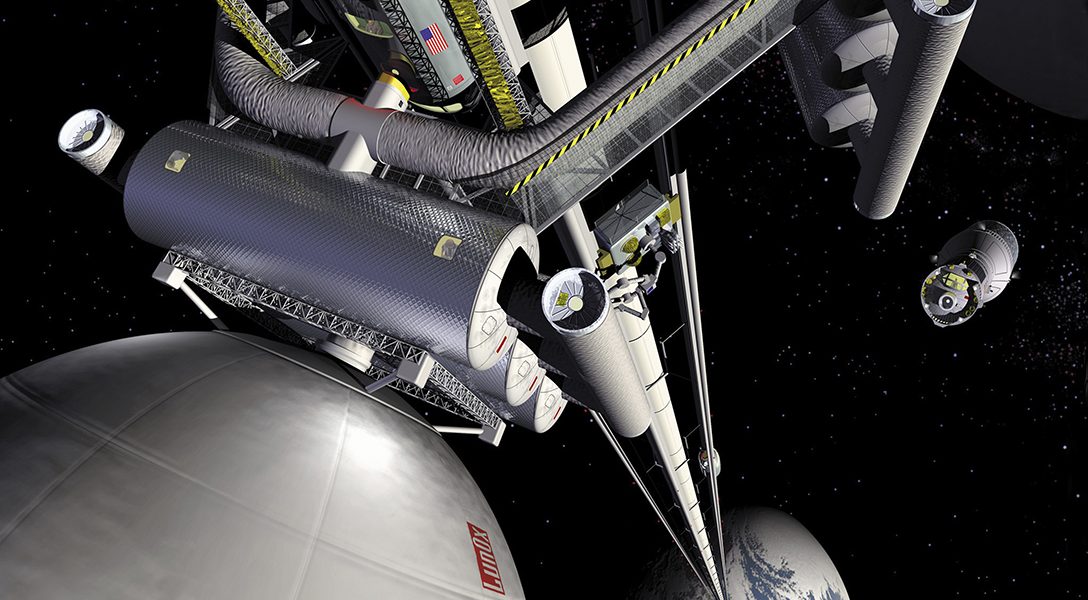 A space elevator could begin transporting people and things 22,000 miles into geosynchronous orbit by 2045. An experiment will soon be conducted on the International Space Station to test the concept. Space elevators could reduce that cost of moving freight into orbit "from roughly $3,500 per pound today to as little as $25 per pound." Photo credit: Pat Rawlings / NASA
Editors' Picks

The author writes, “California has long sought to lead the nation through what its legislators see as progressive regulations that curb corporate misbehavior. But pending challenges to two new laws show the limits of the state’s power, particularly when California’s measures seek to cross state lines.”

The author writes, “A luxury handbag designer in Palm Beach, Florida, has reportedly been chosen by Donald Trump as the next US ambassador to South Africa. The appointment of Lana Marks, whose products sell between $10,000 and $400,000, would be likely to cause some surprise: Marks was born in South Africa but has not lived there for more than 40 years.”

The author writes, “Danske Bank on Thursday said it was being investigated by the US Department of Justice over possible money laundering related to more than $200 billion transferred through the Danish lender’s Estonian branch.”

The author writes, “The designation of the half-mile roadway along Central Connecticut State University’s campus has become perhaps the most talked-about street name in the country. It was named Paul Manafort Drive in 1994 to honor a former mayor and business leader, Paul Manafort Sr. But the scandals of his son, Paul Manafort Jr., began making international headlines last year.”

The author writes, “The aggressiveness of the Trump administration’s policies toward migrant children has created a new term — ‘tender age shelters’ — language which ironically obfuscates the truth about the billion-dollar business of holding children in shelters run by some of the same private companies that operate prisons. As the Trump administration ramps up the construction of tent camps, what remains clear is that the big business of detention centers for migrant children will only continue to grow, and that few safeguards are in place to ensure the health and well-being of those children.”

From FAIR: “That these two US government creations, along with a NATO offshoot like the Atlantic Council, are used by Facebook to distinguish real from fake news is effectively state censorship.”

US Pulls Out of 1955 Treaty Normalizing Relations With Iran (Dan)

The treaty was established after the CIA overthrow of the Iranian government in 1953. Pulling out from the treaty is largely a symbolic gesture, as normal relations with Iran have not existed since the 1979 revolution. Yet the Trump administration’s decision seeks to further isolate Iran, as well as deter other countries — mainly signatories to the 2015 nuclear agreement — from doing business with Iran.