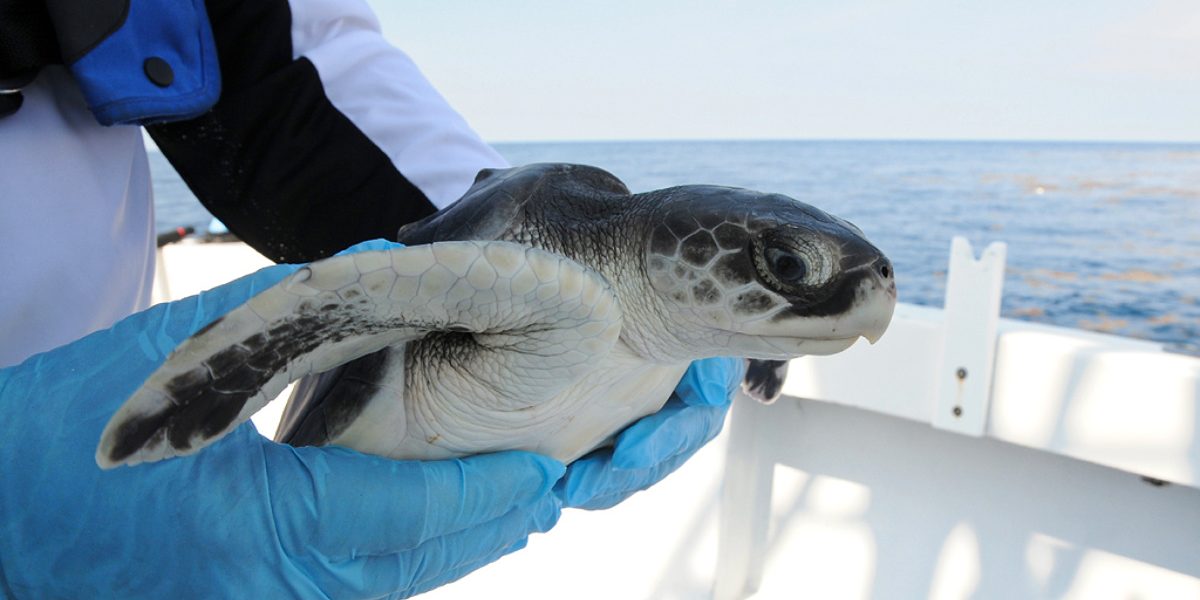 The author writes, “The rescue mission was supposed to be simple: fly 30 endangered turtles to their new home in New Orleans from Cape Cod, Mass. Instead, volunteers encountered weather and mechanical setbacks that made the pace of the journey more in keeping with the speed of the turtles they were rescuing. ... Kemp’s ridley sea turtles are the rarest and most endangered of the seven species of sea turtles. Each year, hundreds are rescued from beaches along Cape Cod, said Connie Merigo, rescue department manager at the New England Aquarium in Boston.” Photo credit: FWC Fish and Wildlife Research Institute / Flickr (CC BY-NC-ND 2.0)
Editors' Picks

From the Seattle Times: “The chants echoed off the glassy exteriors of Amazon’s South Lake Union corporate headquarters: ‘If we don’t get it, shut it down!’ ‘Tax! Bezos!’ Amazon, led by CEO Jeff Bezos, is projecting record-smashing holiday sales. Bezos has seen his personal wealth grow by nearly $67 billion this year. But that bounty has not found its way into the pockets of Amazon’s front-line workers, some employees say, including thousands who demonstrated globally Friday. Those workers say the company has not done enough to keep them safe and reward their labor during the COVID-19 pandemic, even though Amazon shares have nearly doubled in value since March as Americans do more of their shopping online.”

The author writes, “The Justice Department has created new regulations allowing for the use of more methods for federal executions, including firing squad and electrocution. The new rule … comes as the administration rushes to execute five more prisoners before the end of President Trump’s term. It is part of a spate of moves and rule-making processes before he leaves office.”

‘Nobody Can Block It’: How the Telegram App Fuels Global Protest (Dana)

The author writes, “Telegram, a messaging app created by the reclusive Russian exile Pavel Durov, is suited to running protests for a number of reasons. It allows huge encrypted chat groups, making it easier to organise people, like a slicker version of WhatsApp. And its ‘channels’ allow moderators to disseminate information quickly to large numbers of followers in a way that other messaging services do not; they combine the reach and immediacy of a Twitter feed, and the focus of an email newsletter. The combination of usability and privacy has made the app popular with protestors (it has been adopted by Extinction Rebellion) as well as people standing against authoritarian regimes (in Hong Kong and Iran, as well as Belarus); it is also used by terrorists and criminals.”

A German Man’s Nazi Grandfather Took Over a Jewish Man’s Store. He Tracked Down His Descendants to Apologize. (Russ)

The author writes, “Thomas Edelmann was born in Germany more than 25 years after the Allies defeated Hitler. Yet last year, following an unexpected marketing call, the 49-year-old businessman contacted a retired teacher in Israel to apologize for the actions of the grandfather he never met.”

The author writes, “To give you an eclectic auditory vacation, personal development website Unify Cosmos has created a soundboard with background noise from 50 travel destinations around the globe. The collection is meant to relax and rejuvenate you, so you won’t hear too many honking cars in chaotic metropolises or similarly cacophonous getaways. Instead, you’ll encounter some of the best tranquil tones that the world has to offer. If you always use your PTO to head to a sunny beach, you might like a virtual jaunt to Makena Beach in Maui, Hawaii, or the Corniche waterfront in Abu Dhabi. If you prefer your trips to have more trees—and the wildlife that inhabits them—you’ll probably enjoy the talkative birds of Kanha National Park in Madhya Pradesh, India, and the wind whistling through South Korea’s Juknokwon bamboo forest.”