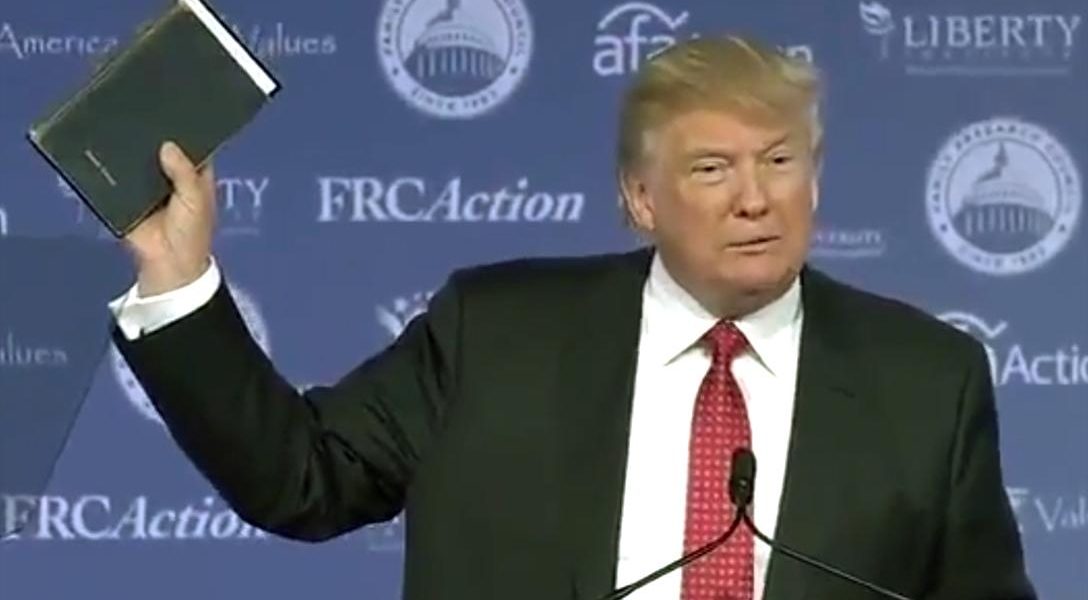 September 30 is unofficially Blasphemy Day. To observe this occasion WhoWhatWhy is reflecting on this image of Donald Trump holding up his bible at the Values Voter Summit in Washington, DC on September 9, 2015.
Editors' Picks

Army documents provide insights into how officials interact with the Freedom of Information Act to get favorable coverage and sidestep The New York Times’s inquiries. Sure, it’s a good step for the Times to be addressing disinformation and information-blocking. Next, maybe the newspaper will cover how the Times itself seeks to ridicule and marginalize the important work of others.

Hoo boy, will our very good Libertarian friends hate this one. But worth reading the whole thing, not just this excerpt, which is from an essay by Mike Konczal in The Boston Review:

“But a new wave of legal history is overturning the narrative of paradise lost. In Jerry Mashaw’s Creating The Administrative Constitution: The Lost One Hundred Years of American Administrative Law (2012), we see that the early U.S. government was both far more bureaucratic and expansive than partisans of deregulation assert. And Daniel Ernst, in Tocqueville’s Nightmare: The Administrative State Emerges in America, 1900–1940 (2014), attacks the alien-import thesis, arguing that modern American regulatory agencies were justified by domestic legal norms.

“Indeed, this scholarship does more than just show how far back the administrative state goes in American history. It shows that the practices and institutions of bureaucrats have not assaulted our Constitutional liberties but rather have helped define and expand our very notion of liberty. This emergent school of thought, known as ‘administrative constitutionalism,’ documents how our institutions, in their everyday dealings with the public, provide the basis for the liberties courts end up adopting and ratifying….”

NASA scientists this week announced that there is evidence for the existence of liquid water on Mars. Even though the space agency has a fully functioning robotic car that it can drive around on the Red Planet, the Curiosity rover is not allowed to go near that water.

The reason is that scientists are worried about contaminating Mars water with Earth cooties.

“Because liquid water appears to be present, these regions are considered special regions where we have to take extra precautions to prevent contamination by earth life,” Rich Zurek, chief scientist of NASA’s Mars Program, wrote on Reddit.

Snowden, the whistleblower who revealed details about the NSA’s massive global spying operation and is currently in exile in Russia, joined Twitter just this week. He has proven to be quite a hit on the site and amassed nearly 1 million followers overnight (he only follows a single Twitter user: @NSAgov).

Instead of asking an American business to curtail the First Amendment rights of a citizen, Pataki, who only has about 50,000 followers, might want to think about asking Snowden about achieving the same level of popularity.

Jeb claims his tax cut proposals aren’t designed to benefit principally the rich. But even Fox’s Chris Wallace didn’t buy that, pointing out that after-tax income improvement for middle class would be much smaller than the benefit for the wealthy:

“That’s the way it is,” Bush says about how tax cuts must inevitably play out — that because rich people pay more taxes, they would get more relief.

Yet despite Bush’s argument that his hands are somehow tied in terms of who gets the most back, he could certainly give larger tax breaks to the middle class instead of to himself and his friends — if he actually wanted to.

How Dragging Our Feet on Refugees Creates More Terrorists (Russ)

“The data is clear: Most terrorists don’t land on American soil from the ranks of refugees but are people born here and recruited.”

“A large study that looked at data from nearly every general medical practice in England suggests that water fluoridation may increase the risk of developing hypothyroidism, or underactive thyroid. This condition, in which the thyroid gland doesn’t produce enough hormones, is associated with symptoms such as fatigue, obesity and depression.

“The study found that locations with fluoridated water supplies were more than 30 percent more likely to have high levels of hypothyroidism, compared to areas with low levels of the chemical in the water. Overall, there were 9 percent more cases of underactive thyroid in fluoridated places….”

“A business database search turned up 175 Canadian corporations that Irving family members own, many without the Irving name attached.” Heavily dominating an entire Canadian province, the Irvings are now increasing their influence in Maine.

Scientists have recovered more than 50 artifacts from the site, including a bronze armrest that was possibly part of a throne. This is the same site that has already yielded what may be the world’s oldest computer.

“Discovered by Greek sponge divers in 1900, the shipwreck has since yielded some of the most impressive antiquities to date. And while severe weather has hampered recent dives, earlier this month a team of explorers recovered more than 50 stunning new items, including a bone or ivory flute, delicate glassware fragments, ceramics jugs, parts of the ship itself and a bronze armrest from what was possibly a throne.

“Every single dive on the wreck delivers something interesting; something beautiful,” marvels Brendan Foley, a marine archeologist at the Woods Hole Oceanographic Institute and co-director of the project. “It’s like a tractor-trailer truck wrecked on the way to Christie’s auction house for fine art — it’s just amazing.”